Slam Dunk are pulling out all the stops to make 2019 their best year ever!

We’re getting a taste of nostalgia at Slam Dunk Festival this year as heading up the latest batch of artists announced are Plain White Ts and Hellogoodbye! Both acts have developed a huge fanbase around the world over the past decade and both are back with new albums!

Touche Amore are going to be bringing their riotous performance to the Slam Dunk arena while Canadian sweetheart Lights will be bringing her dazzling vocals!

Tigers Jaw and Microwave add to the American contingent flying over for this year’s festival, while Employed To Serve and Our Hollow Our Home represent the outstanding UK heavy section!

Hellogoodbye‘s Forrest Kline says: “We’re totally giddy to be invited over to Slam Dunk this year! The line up is insane, so many friends and lovers in one spot, it’ll be a completely gratuitous smile fest. Hellogoodbye has seen (and self-inflicted) countless changes between Slam Dunk visits in 2006, 2011, and now 2019; but I’ve got no doubt SDF will remain comfortingly the same: AN ABSOLUTE FUCKING TREAT.”

Lights rejoices of her Slam Dunk debut: “I’m so pumped to be on the Slam Dunk bill for the first time. Not only am I excited to play with a bunch of great bands, but it’s been over two years since I’ve been back in the UK so needless to say Slam Dunk can’t come soon enough.” 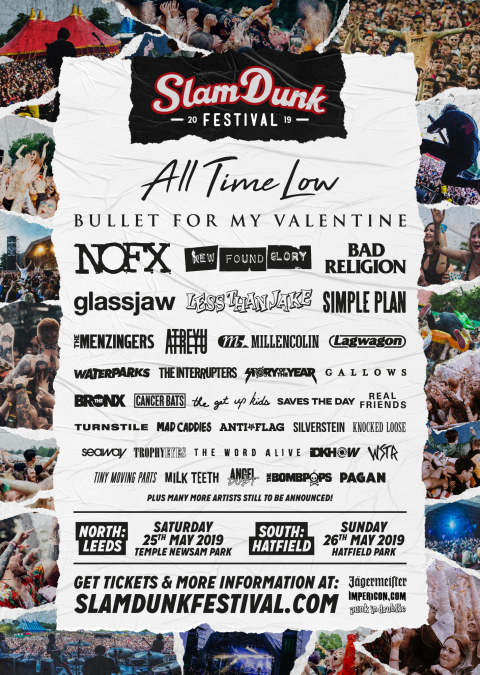 We also have the full line-up for the Jägermeister Stage as you can see below:

The stage will run in the intervals of the Impericon Stage so you won’t have to worry about missing any of your favourite heavy acts!