Slam Dunk Festival – ones to watch part 2 – US acts

Welcome to part 2 of the ones to watch at this year’s Slam Dunk festival. For this part, we are focusing on some of the incredible overseas acts that are gracing the mammoth party. 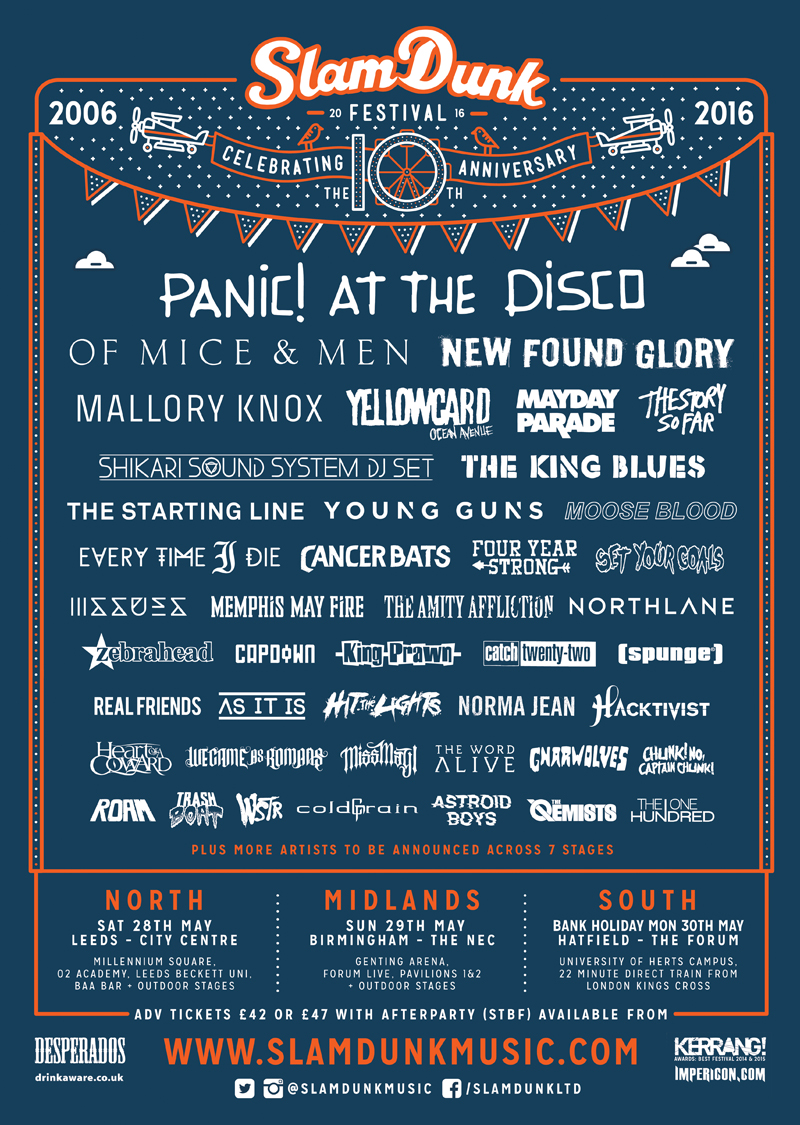 Welcome to part 2 of the ones to watch at this year’s Slam Dunk festival. For this part, we are focusing on some of the incredible overseas acts that are gracing the mammoth party. So without further ado, let me tell you who you should check out;

The Anaheim goth rockers have spent the last decade grafting away among a multitude of line-up changes to perfect their sound and have been rapidly rising over the last 12 months. Their track Angel Eyes (ft. Chris Motionless) is arguably their most successful with over 5 million YouTube views. Album number three Malevolence has been extremely popular since its release in October 2015. The quintet are known for their dark lyrics and their electrifying live performances have earned them the spot of headliners on the Kerrang Fresh Blood stage at this year’s festival.

Panic! At The Disco

Festival headliners Panic! At The Disco danced back into the limelight in 2016 with the release of album number five Death Of A Bachelor. With catchy hooks and massive choruses, a major sing-a-long is guaranteed with a headline set that is sure to take everyone back to their teenage years with tracks such as Nine in the Afternoon and I Write Sins Not Tragedies.

US pop-punk outfit Waterparks may not be a name that people on this side of the pond are very familiar with just yet but they are already making waves in the States! The Texan trio who signed to Equal Vision Records and are bringing old-school pop-punk back in their own way, already have the backing of several big names from Good Charlotte’s Joel and Benji Madden who, alongside producer Courtney Ballard (5SOS, State Champs, The Used), co-produced the band’s most recent EP Cluster to Mikey Way who played bass on the record! The Madden twins helped propel the trio to US stardom after enlisting them on Good Charlotte’s highly-anticipated reunion show as the ONLY support act! So what can you expect at Slam Dunk? Well the trio will bring high energy, upbeat pop-punk with dual vocals.

Beautiful Bodies are leading the way in the new wave of female fronted punk bands. The band create a unique comfortable atmosphere that is full of energy and frontwoman Alicia is likely to venture into the crowd at any chance possible. The band have been on Warped Tour in both the USA and UK, South By Southwest and have had tracks from their debut album Battle (released June 2015) played at New York Fashion Week and the 2015 World Series. Catch their unique punk sound on the Kerrang Fresh Blood stage.

The Word Alive have just released album number 3 Dark Matter and it is an atmospheric and electric masterpiece! The band are set to bring the expansive and dynamic album to their set at the festival. With harsh screams and smooth cleans, they’ll have you singing, screaming, dancing and moshing along throughout their set.

What can you expect from Of Mice & Men? Well, expect lots and lots of pits, monster riffs, huge drum and bassline, smooth clean vocals and gruff growls. Frontman Austin Carlile commands the stage and has the audience eating out of the palm of his hand as you witness a true masterclass of a live show. Their intense live performances have earned them the spot of second stage headliners at this year’s festival.