After a hugely successful 2018 festival, Slam Dunk has revealed the first of it’s artists for 2019 and also some major changes! Sadly for Midlands attendees, the date will not be featuring in the 2019 plans, with only Hatfield and Leeds taking place. The Leeds site has also been moved to the larger Temple Newsam […] 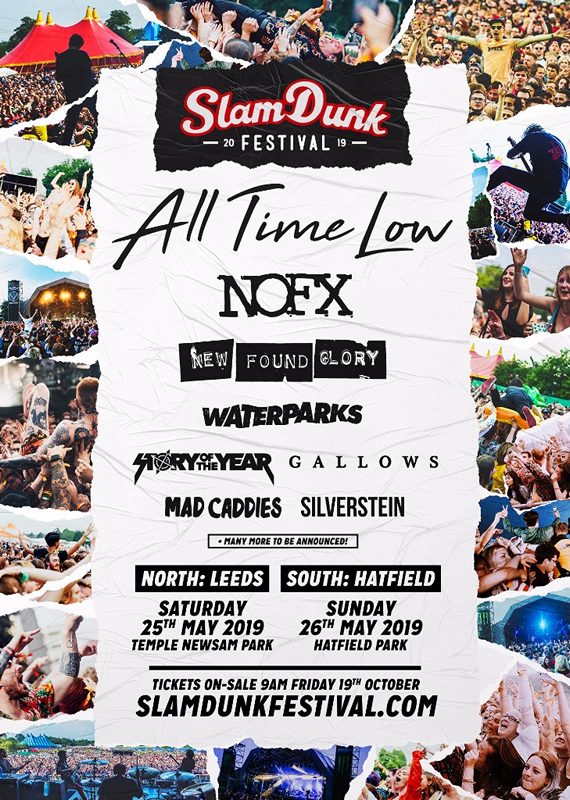 After a hugely successful 2018 festival, Slam Dunk has revealed the first of it’s artists for 2019 and also some major changes!

Sadly for Midlands attendees, the date will not be featuring in the 2019 plans, with only Hatfield and Leeds taking place. The Leeds site has also been moved to the larger Temple Newsam Park!

Headlining the 2019 festival will be critically acclaimed American pop-punks All Time Low, their appearance is a UK exclusive for 2019! Frontman Alex Gaskarth rejoices; “There’s been a bit of an ATL drought in the UK recently so we thought it best to come back and tear shit up with some rad bands. Bring your life jackets.”

Joining All Time Low are punk legends NOFX, a favourite at the festival across their 25 year history! The band’s Chad Gilbert exclaims; “We are the Michael Jordan of Slam Dunk. And we are coming to alley oop all our jams down your faces.”

For the third time in four years, Waterparks are set to bring their high energy show to Slam Dunk in 2019! Awsten Knight enthuses; “HELLO. WE ARE COMING BACK TO SLAM DUNK. YES. THIS IS ALL. VERY GOOD. SEE YA SOON.”

Story Of The Year will be bringing a highly anticipated set after 2017 saw their first new music in seven years. Ryan Phillips says; “We are crazy stoked for Slam Dunk, especially since we haven’t been to the UK in ages! We’re itching to get over there and jam some tracks from our latest album “Wolves”, so get ready to have your face melted off and have all of your beer drunk by us dummies”.

A reunion fans have been dying for in punk icons Gallows will be seen at Slam Dunk 2019! Laurent Barnard says; “We’ve tried to bury Gallows so many times, but the fucker just won’t die. I guess we’ll see you in May!” While bandmate Stuart Gili-Ross adds: “Leeds & Hertfordshire. These will both feel like hometown shows for us. The time feels right for a Gallows show & we’re coming in hot”

Ska favourites Mad Caddies and Canadian post hardcorers Silverstein will both be returning in 2019! Silverstein say; “We are excited to be returning to the UK in 2019 for the next instalment of Slam Dunk!  We originally played the festival way back in 2009 and have been looking forward to doing it again. Expect a jam packed set of old & new material.”

Slam Dunk Festival will be taking place over the following period in 2019: