*FESTIVAL KLAXON* The second festival announcement of the day is the first headliner for Slam Dunk Festival 2020! 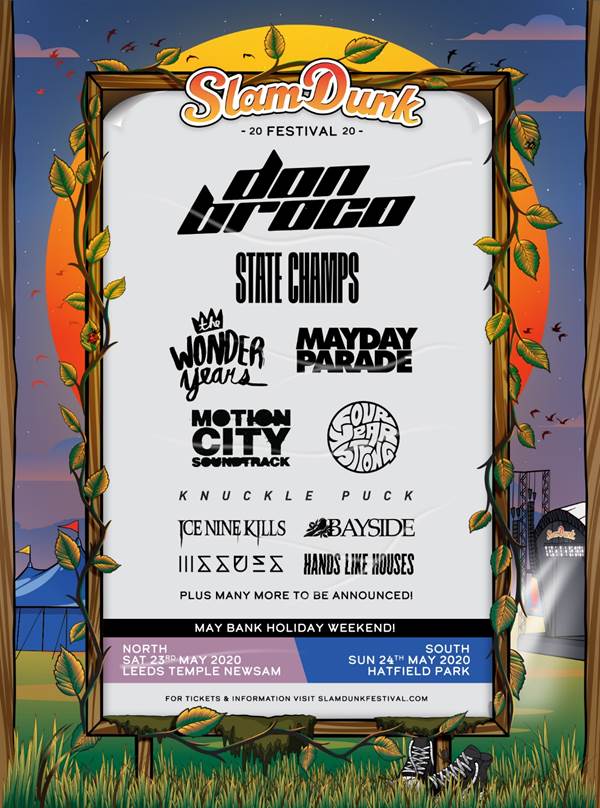 Taking place in Leeds on May 23 and Hatfield on May 24, the quartet will top the bill on what is set to be another incredible year for Slam Dunk.

We honestly think that the lineup is absolutely crazy and this is just the first announcement!

Don Broco seem quite pleased too as the say: “We bloody love Slam Dunk so it’s a massive honour to be asked to headline next year! Right from our early EP days we’ve always had the best time at Slammy D. It was our first proper festival booking way back when and since we’ve played slots throughout the years on pretty much all the stages, most recently a very surreal performance for us the year before last playing to sea of Rob face masks on the main stage. With this being our first ever festival headline we will certainly be making it a show to remember.”

Alex Garcia of Mayday Parade is also delighted to be a part of Slam Dunk 2020. He said: “We’re extremely excited to be coming to England for Slam Dunk Festival. It’s been too long since we’ve played it and it’s definitely one of the most fun festivals to be a part of from the crowd’s energy to the after parties. Not to mention we love touring the UK! ”

Festival regulars Four Year Strong haven’t lost any excitement for the festival despite their almost resident status. Joe Weiss said: “The UK has always been one of our favourite places to play and we can’t wait to come back to Slam Dunk Festival”

On the heavier side of the bill, metalcorers Ice Nine Kills return for the second time. Spencer Charnas said: “After this current sold-out headlining tour of the UK, I can’t think of a better way to return next year than on Slam Dunk….”

Issues are also returning and add: “It’s so exciting to be back at Slam Dunk! We’re going all in!”

The two-day festival is set to follow the new fully outdoor format as trialed successfully this year. Festival director Ben Ray said: “2019 was a big year for us, with the festival moving to fully outdoor sites. It was a massive success so I’m pleased that we are returning to them. Don Broco headlining is pretty special for me as they are the definition of a homegrown band! They first played in 2011 on the new bands stage and have risen through the ranks to the top of the bill!”