Reading and Leeds Festival 2018 ones to watch

As we draw closer to closing out the Summer with Reading & Leeds Festival 2018 (August 24-26), we take a look through the diverse line-up to find some of our unmissable picks for the weekend. The Fever 333 (Reading only, Friday) Following the demise of one of the alternative world’s favourite bands in recent years […] 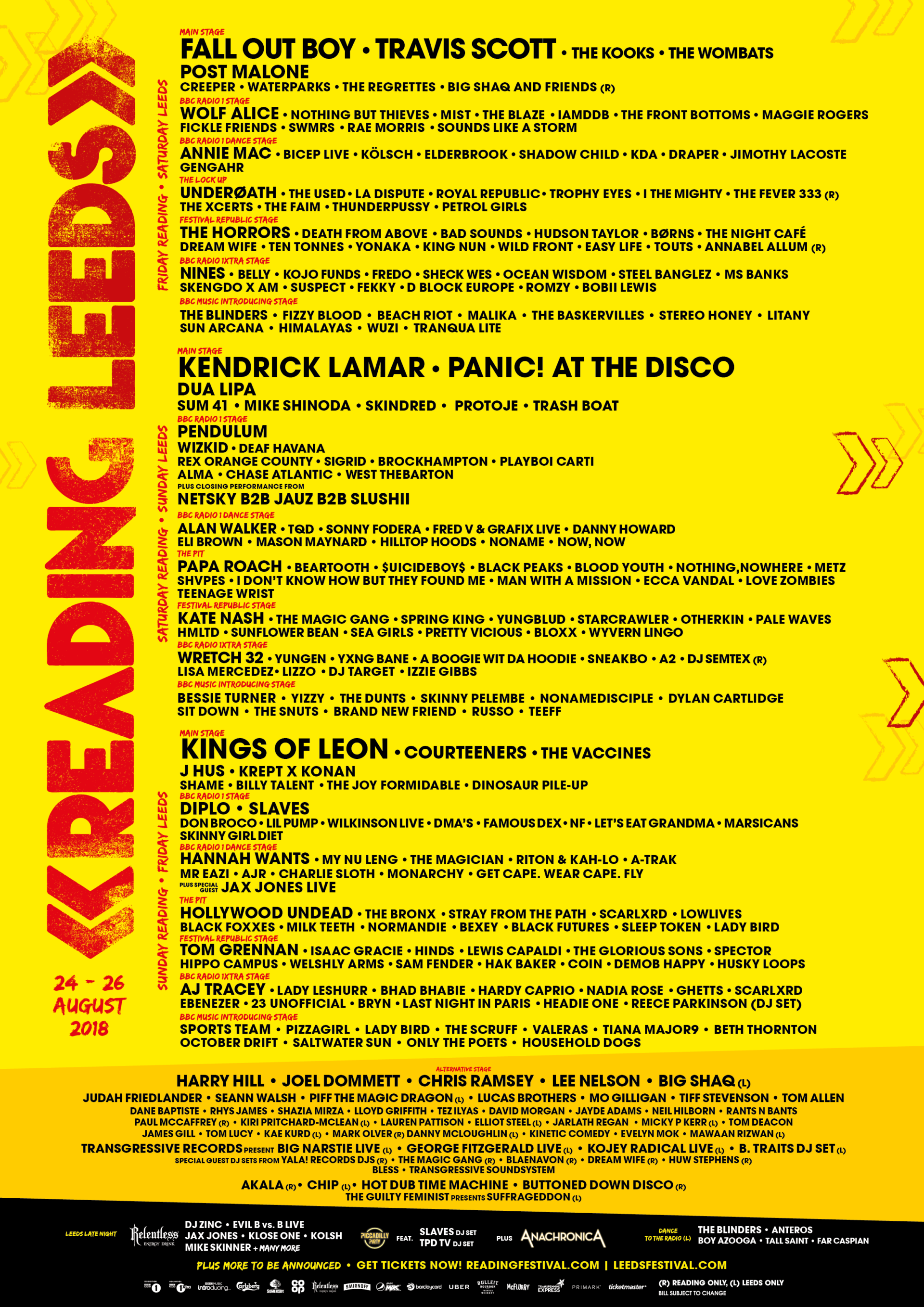 As we draw closer to closing out the Summer with Reading & Leeds Festival 2018 (August 24-26), we take a look through the diverse line-up to find some of our unmissable picks for the weekend.

Following the demise of one of the alternative world’s favourite bands in recent years letlive., frontman Jason Butler teamed up with NightVerses’ Aric Improta on drums and former The Chariot guitarist Stephen Harrison to create The Fever 333. The LA trio have created a punishing combination of hip-hop, punk and huge guitars as they put the world to right. Catch their hellraising set on The Pit/The Lock Up stage.

Australian alt-rockers The Faim have had a whirlwind six months since the release of debut single Saints Of The Sinners in February. Their first tour was a mammoth three month trip to the UK as support for Lower Than Atlantis and then PVMNTS, peppered with headline shows and appearances at Slam Dunk and Download festivals. In between, they have toured their native land with Sleeping With Sirens and PVRIS and Germany with The Dangerous Summer. With insanely catchy melodies, soaring vocals, their set on The Pit/The Lock Up stage is one not to miss!

Post Malone has quickly become one of the best artists in the world. His ability to combine elements of rock, hip-hop, R’N’B and pop to create a sound that has everyone from pop music lovers to metalheads addicted to his music is second to none. Catch him live on the Main Stage.

Welsh quartet HIMALAYAS will be bringing their heavy riffs and earworm melodies to the BBC Introducing Stage. While still a relatively new band, they have performed at Y Not Festival, Tramlines, Truck Festival and have supported Kaiser Chiefs, Marmozets and Black Honey. Make sure to catch their electric set!

I The Mighty will be bringing their explosive live show back to the UK for Reading and Leeds festivals. Expect one of the best alt-rock bands to take to The Pit/ The Lock Up Stage as they continue to lead the way for the progression of alternative rock.

Brit post-hardcorers Trash Boat have been steadily working their way up the industry ladder and will be bringing their honest and introspective latest record Crown Shyness to the Main Stage of Reading and Leeds. Expect a polished performance as their appearance comes off the back of a Summer long stint on the final ever Vans Warped Tour.

BBC Radio 1 Stage will see Australian trio Chase Atlantic bring their eclectic mix to Reading and Leeds! Combining rock, R&B and dark pop, the trio have seen themselves gain a worldwide fanbase, performed on the Vans Warped Tour and even gone viral with hit single Friends.

Linkin Park co-vocalist Mike Shinoda will take to the Main Stage with his emotional debut solo record Post Traumatic, written following the death of close friend and bandmate Chester Bennington. Expect a set full of emotion as Mike pours his heart out in the way we all do best, through song.

Yorkshire hip-hop rock outfit Yungblud will be gracing the Festival Republic Stage with his genre bending set. Influenced by classic rock artists including The Beatles, Bob Dylan and The Clash, he infuses grime and dub for a modern twist.

Swedish rockers Normandie will be bringing their atmospheric live show to The Pit/ The Lock Up Stage. Expect anthemic sing-a-longs and huge hooks from the rising stars who have shared stages with the likes of Anberlin, Memphis May Fire and Yellowcard. They are set to release sophomore album White Flag in October and anticipation is high following the critical acclaim that 2016’s debut full length Inguz received.

Exeter rockers Black Foxxes will be bringing their entertaining live show to The Pit/ The Lock Up Stage. The trio continually push the boundaries of their creativity and are gearing up to show the world sophomore record Reiði (released later this year). Expect a vicious live show.

Formed of members of esteemed bands The Defiled, Amen, No Devotion and The Ataris, you can expect nothing short of a super group as LOWLIVES take to The Pit/ The Lock Up Stage. They have only been together for around a year and haven’t even released their debut EP (Burn Forever, August 31) but the EP’s title track has amassed more than 45,000 Spotify listens alone and they have already scored a session at the coveted Maida Vale for BBC’s Radio 1 Rock Show and are about to support The Used on their rescheduled UK tour.

Long Island may be known for it’s ice tea, but hardcore fans know it as being home to genre-bending titans Stray From The Path. The quartet will be bringing their combination of hardcore/metal brutality and energy with hip-hop lyricism to The Pit/The Lock Up Stage.

Rap-metal crossover crew Hollywood Undead will be bringing their explosive live show to The Pit/The Lock Up Stage. The ever-evolving quintet will be delighting fans with their EDM-tinged latest single Another Level amongst their impressive catalogue of hits spanning near two decades!