OldCorner is going to be a feast of meaningful albums, emotional single tracks and a journey through my reminiscences and the music that accompanied them. It is a showcase of music that everyone should listen to. so if you are sitting comfortably kids, let’s begin. 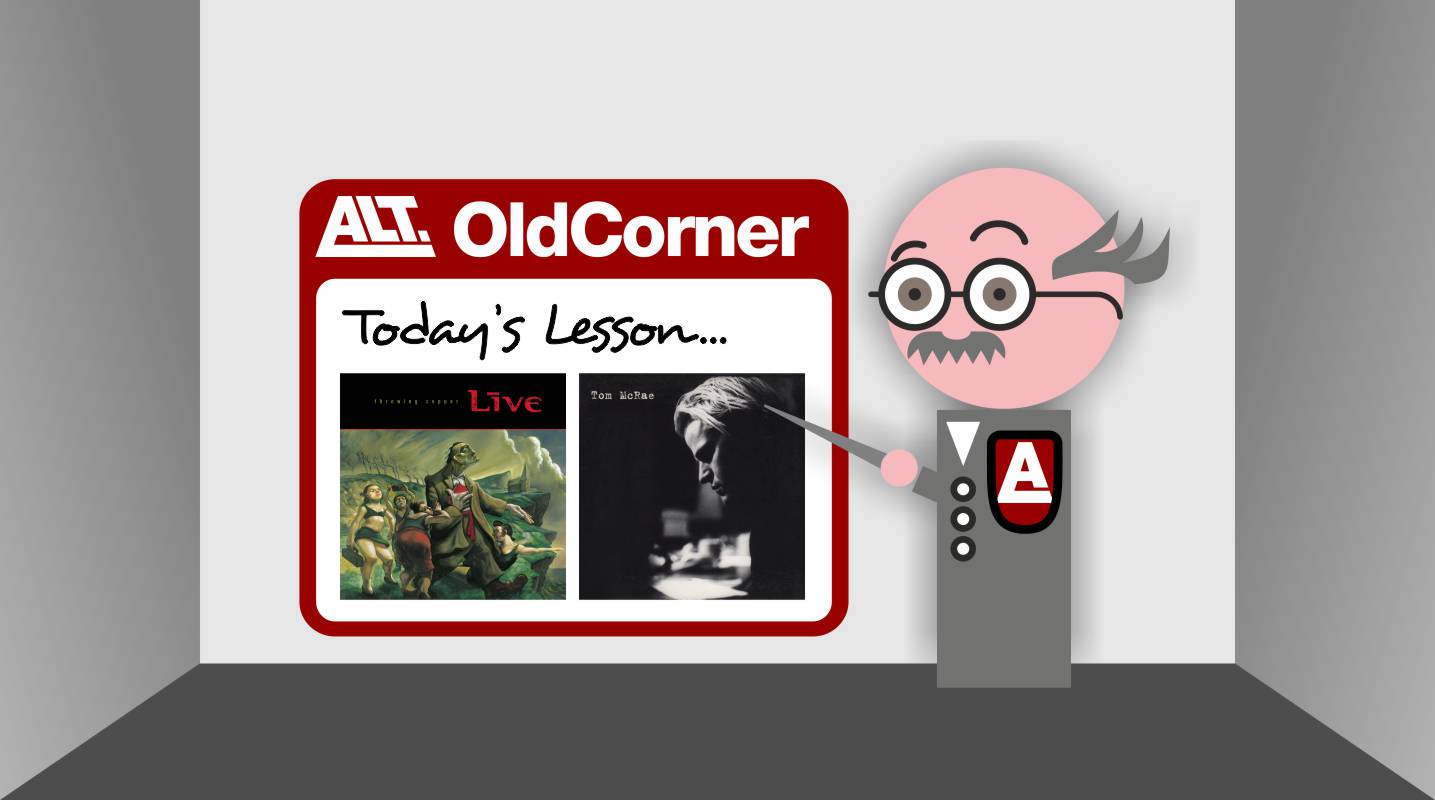 I am old, heading inexorably towards forty and am a co-creator of the AltCorner website. I am the chap that does the technical website stuff and design. I have been un-cool, un-hip, and a general old fogie when it comes to new music, which is where Brad comes in; he knows new music like the back of his hand.I cannot really tell you about new music. However, with age comes wisdom, and that is what I can pass on. So here is my contribution… Old Corner.

OldCorner is going to be a feast of meaningful albums, emotional single tracks and a journey through my reminiscences and the music that accompanied them. It is a showcase of music that everyone should listen to. so if you are sitting comfortably kids, let’s begin.

I wanted to start with my first ever album. It was number one in the US at the time, and I purchased it with my own hard-earned cash from the sorely missed ‘Our Price’ Music Shop. That time was 1994;  I was with my mum shopping, tapes were still for sale, and TakeThat were Number One in the UK with ‘Everything Changes’ (oh, the humanity!). I had never heard of the band, and to be honest, I only bought it because I liked the cover artwork. That was how we used to do it ‘back in the day’… you bought an album and gave it a listen – if it was rubbish, tough!

Luckily for me however, the album was, and still is, one of my favourites: ‘Throwing Copper’ by Live.

The album starts with The Dam at Otter Creek – a haunting track with a great lyrics, and really interesting vocal distortion. A song full of feeling and punchy drums. It’s a slow builder that finishes with a nice ‘frantic’ rocky end.It is just the best track start to this album.

Now the next four tracks Selling the Drama, I Alone, Iris and Lightning Crashes should be taught in the National Curriculum,They are that good. Selling the Drama is a beautifully crafted middle of the road rock song, with great lyrics and outstanding guitar riffs. They don’t need all of that distortion and screaming to create an emotionally charged track.

I Alone is a pant moistening, sing along, cry and thank your [insert appropriate GOD here] that music exists. Once again this is a ‘story song’ and is a virtual powerhouse of meaning and honest good clean rock – something you could take home to mummy and she would be proud. Live is a rather religious band, and although I have nothing against that (I love Creed too), it does mean that some of the songs have religious undertones. I prefer my rock without religion, but that’s just me.

Next is a track is Lightning Crashes – you have to get some headphones for, turn up the volume and enjoy the alternating side to side guitar track that is achingly simple. Some truly emotional lyrics, which unless you have a heart made of stone (or are not listening hard enough), will make you get a lump in your throat and blink a lot. It is a masterpiece of what can be achieved with some really simple music, some stripped back guitar and a little drums towards the end as the song builds. All this speaks to you in a personal way. Epic song, about the transference of life; you can look it up on your Interweb-Thingy!

I realise i am waffling now, and so I am going to group a few songs together… Top, Shite Town, T.BD, Stage with Waitress and Horse (a bit of a filler song) are all pretty good second half-of-album songs, with the All Over You being the standout track.

Reminiscence from this album are thus… Picture the scene… I am 18, in Bournemouth UK and youthful, slim, good-looking with a packet of Dunhill International in my ‘military crop jacket’, a perfect accompaniment to my army boots and ripped jeans – yes, I was a ‘metaller’ or whatever. I am with my great friend and am finishing a litre bottle of Bacardi, in a rough area at about 10pm. We stumble into this ‘cool’ nightclub (the Hot-house) and danced to rock music until morning, like the floor was on fire and we were putting it out. I vaguely remember that ‘Stage’ was played ( that’s about all I do remember from that night), but my sharpest recollection was that the next morning  I had one of the worst hangovers ever, and found more UPBs* than I had ever received in my life… black eye, cuts everywhere and cramp from the dehydration. Great days!

*UPB is an Unidentified Party Bruise – the kind where you are like… “did i get in a fight?” -No… then when and how the F**k did I do this?

I am going to now bring the tempo down with this offering, and suggest something a bit more grown up. I am talking about the self titled album by Tom McRae, released in 2000. For those who have heard the album, good for you and you are my star pupil. If you haven’t then let me feed you, baby birds. This is a flat out brilliant album filled with intelligent lyrics and great tunes, that go from being  accessible and easy listening, to intense and moody. If you like depressing music that can really ring a chord in your life, then this is a great place to discover what great music is.

Tom McRae is a shining light in singer songwriters, of which I have so many more to tell you about. The album consists of 13 songs with my favourites being the following:

End of the World News – Probably the most popular song and top of many most played songs from him. A great driving song, super to sing along to with catchy lyrics. The song is described thus: ”It’s about the pointlessness and futility of modern life and convenience, how we take it all for granted, and we won’t be the one to pay the price, the planet will be” – Stoned Immaculate

Bloodless – A great song with vocals that are just begging you to hear what he is trying to express to you.

The Boy with the Bubblegun – A bit of a haunting start, with Tom speaking the lyrics more than singing. The song has a real Damien Rice vibe. Simple acoustic guitar with strings in the background keeps the song clean and allows for those ominous silences for emphasis. The song is all about how powerless he is; a Bubble Gun is an ineffective weapon. Trust me, it’s great and you need to listen to it.

Hidden Camera Show and Ain’t Scared of Lightning are just more delicious nectar from this great album – both songs are classics in my book and are at home when being listened to alone when you are in a funk and just want to pour on the sadness, or having drinks with friends laughing and joking while Tom McRae adds that bit of background in the coolest way possible.

If you want a chill out album full of great lyrics this is one to get. If you want an album full of lyrics like ‘Shut-up’ or (I looked this up and am still astounded) ‘Say you don’t eat pork, don’t eat pussy, Liar, you’re just a actor’, then take your hand, make a fist and punch yourself in the face repeatedly. Also put a belt on, pull up your jeans because no-one wants to see your pants. And while I am here Skeptor… it should be “You’re just AN actor” – the N makes a difference!