GUNSHIP is a neon soaked, late night, sonic getaway drive, dripping with luscious analogue synthesizers, cinematic vocals and cyberpunk values, exploding from the front cover of a dusty plastic VHS case which has lain forgotten since 1984. 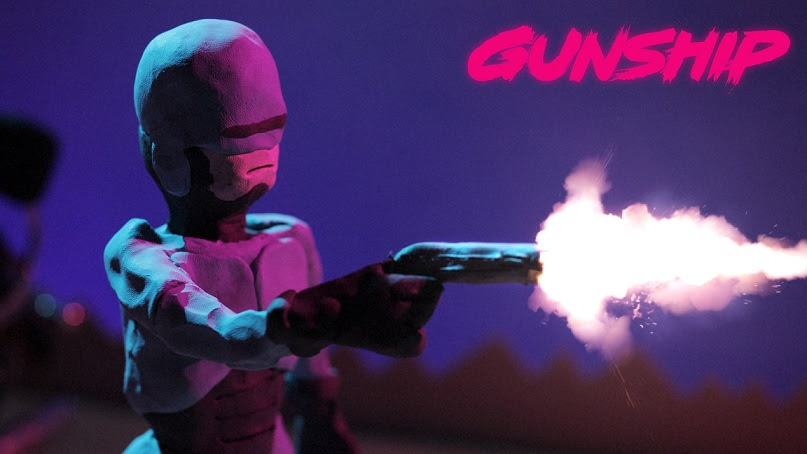 GUNSHIP is a neon soaked, late night, sonic getaway drive, dripping with luscious analogue synthesizers, cinematic vocals and cyberpunk values, exploding from the front cover of a dusty plastic VHS case which has lain forgotten since 1984. Created by Dan Haigh, Alex Westaway and Alex Gingell, GUNSHIP is an evolution of the of the recently popularised synthwave genre, which was originally started by Rosso Corsa records & The Valerie Collective artists. The band’s new album is now available via Horsie in the Hedge (order HERE)

Today GUNSHIP have dusted off the VHS to prepare for battle in their monumental new video for their latest single ‘Tech Noir’. The video is a classic ‘Save the Girl’ sci-fi action/adventure story which champions the nature of synthwaves retro and dystopian imagery in a never before seen way. Watch/share the video for ‘Tech Noir’ HERE

‘Tech Noir’ is built in gory and exhilarating Claymation (the animation of clay figurines in stop motion to create a short film), which was created by the estimable award-winning Claymation animator and director Lee Hardcastle, whose recent animations have seen his YouTube views soar in to the millions. The video stays true to GUNSHIPs aesthetics and is filled with numerous throwbacks to 80’s cinema including Claymation reimagining’s of hero’s such as Robocop, Rocky and The Terminator doing battle with the likes of Hellraiser, Alien, Michael Myers and more. 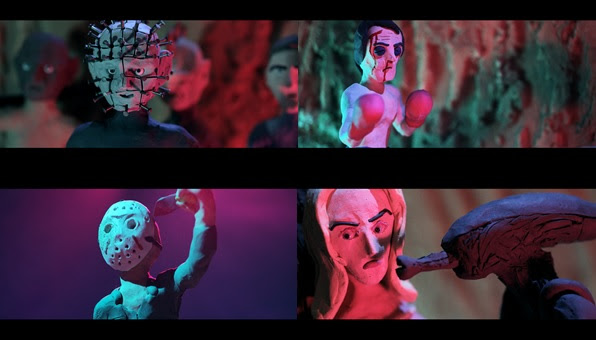 On the new video John Carpenter says, “Absolutely great video. Claymation 80’s. Coolness.” And when discussing his involvement with the new single and why he chose to collaborate with GUNSHIP, John Carpenter said he did it because the band were “nice and cool.” and that Gunships ‘Tech Noir’ is “One of my favorite songs of the year. Gunship rules.” He also went on to say “It would be fun to collaborate with Gunship.” on a larger scale; filling fans with hope for future releases.

There is also an interview with John Carpenter on the subject of his involvement with GUNSHIP and the synthwave scene, which can be read in full below.

If a benevolent private investor offered you a blank cheque to create something with – it could be a movie, a video game, a building, absolutely anything – what would it be?

What accomplishment or risk-taken in your life are you most proud of?

Risk-taking I’m proud of? Learning how to fly a helicopter.

On the track ‘Night’ from your recent album “Lost Themes”, what in the hell is generating the main opening bass arp? It sounds insanely good.

That is secret information.

At the time of writing these questions we are hanging out with film director Corin Hardy (“The Hallow”). He wanted to ask – “Which of your films are you most proud of making”?

Time-space continuum concerns not-withstanding, what advice would you give to your 25 year old self?

We heard that you are a big fan of the Borderlands games – funnily enough two of us used to work for Gearbox Software and games and game design have always been a great passion of ours.  That said, we’re very interested to ask you if you could name a favourite computer or video game of all time, and speak to why you think it succeeds so well?

Favourite video game of all time? BORDERLANDS 2. For reasons of nostalgia: SONIC THE HEDGEHOG.