*FESTIVAL ANNOUNCEMENT KLAXON* 2000 Trees have revealed that Enter Shikari will be headlining the Saturday! It will be the quartet’s first time playing the festival. Also announced alongside the St Albans natives are Black Foxxes, Boston Manor, Chapter & Verse, Conjurer, Holding Absence, Holiday Oscar, Loathe and  Shavpes. Enter Shikari frontman Rou Reynolds says; “Despite not being fortunate […] 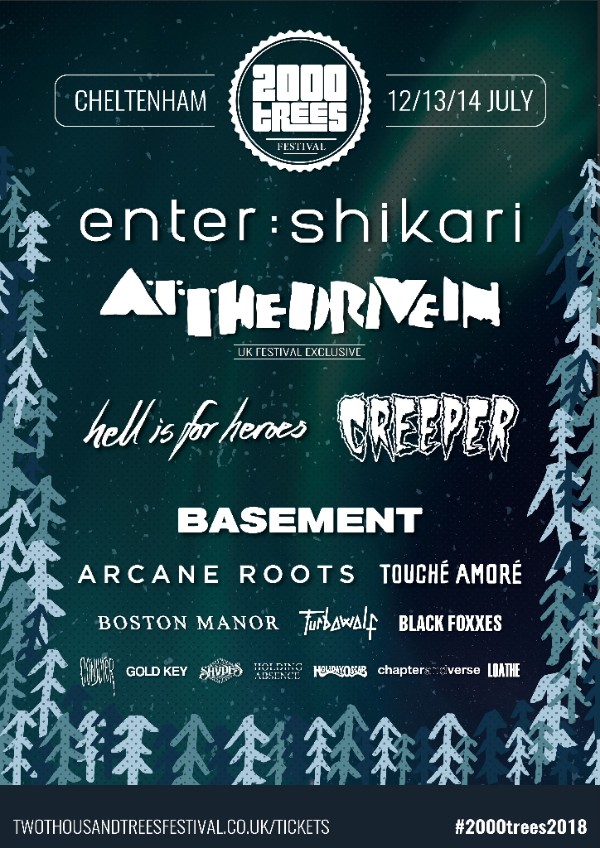 2000 Trees have revealed that Enter Shikari will be headlining the Saturday! It will be the quartet’s first time playing the festival.

Enter Shikari frontman Rou Reynolds says; “Despite not being fortunate enough to attend before myself, I’ve heard nothing but exceptional things about 2000trees Festival; and having not played any UK festivals since May last year I’m buzzing to play out in the English open air again. If you see me without a gin in my hand at any point during the festival rectify that situation immediately, won’t you? Cheers!”

Festival organiser James Scarlett adds; “To have ENTER SHIKARI joining AT THE DRIVE IN as a 2000trees Festival headliner is a massive statement for us and I really feel that this announcement reaffirms our place as the best independent rock festival in the UK. Both bands are absolutely outstanding live and at 2000trees Festival they’ll both be playing full length headline sets. We’re 12 years old this year and this is without doubt going to be the biggest and best 2000trees yet.”

They join the already announced Thursday headliners At The Drive In as well as Creeper, Arcane Roots, Basement, Touche Amore, Hell Is For Heroes, Turbowolf and Gold Key.