Download Festival returned for a Download Pilot event as part of the UK Government’s second phase of live event testing.
10,000 happy Downloaders were able to return to the home of rock – Donington Park – for a more intimate three-day camping festival.
For those of us who couldn’t make it, here is a round-up of the weekend. 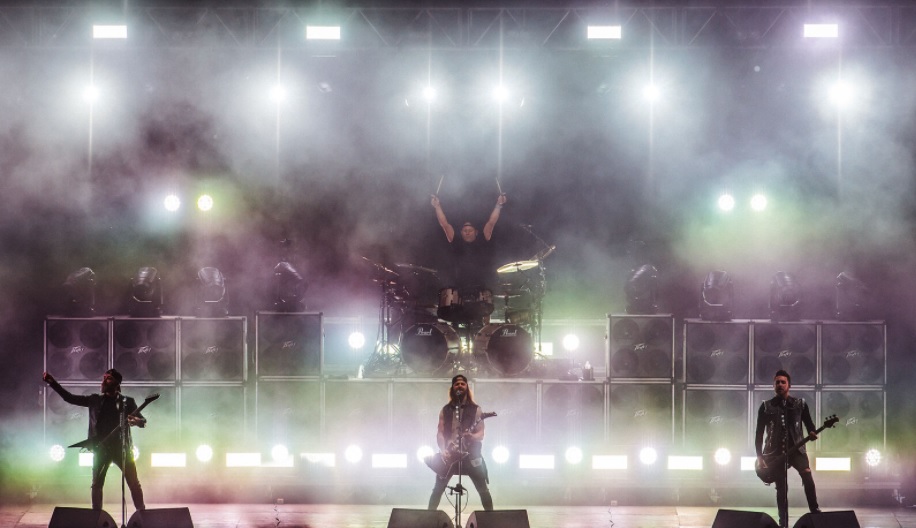 The very first major camping event of its kind since lockdown, the specially created Download Pilot three-day festival took place as part of the second phase of the Government’s scientific Events Research Programme, this weekend over 18 – 20 June 2021. The event was hailed a resounding success with organisers confident that the event proved 100% that events will be able to go ahead from this point onward.

10,000 rock fans were welcomed to the hallowed grounds of rock in Donington Park to enjoy a fully-fledged festival experience with no social distancing, no masks and moshing allowed. All attendees were required to take both a PCR and lateral flow test prior to the event, share details with NHS test and trace and show proof a negative result to enter the festival and are reminded they must submit a second PCR test five days post-event.

Headlined by Frank Carter & The Rattlesnakes, Enter Shikari and Bullet For My Valentine, 40 acts in total from the UK’s world-leading rock scene waived their fees, united by the prospect of moving the live events industry forward and playing in front of an audience for the first time in over a year.

Spirits were high as the gates opened and a sense of camaraderie permeated as Download fans flocked through the gates to set up camp in the new arena. With a late afternoon start Glasgow hardcore outfit Death Blooms became the first band to play a UK festival in 15 months. Hot Milk took to the main stage with frontwoman Hannah Mee sharing an impassioned speech of gratitude ”to be back in a field with all our friends brings actual tears to our eyes, for us it’s everything”. Rising post-hardcore quintet Holding Absence  shone and enigmatic second stage headliners Sleep Token mesmerised with moments of glistening light and post rock shade. UK punk-rock favourites Frank Carter & The Rattlesnakes took full advantage of the occasion with style aplomb. With an enduring message of inclusivity, the celebratory set featured guest appearances from IDLES vocalist Joe Talbot and women-only mosh pits and a Donington worthy rendition of Motorhead’s The Ace of Spades.

On the Saturday, a Download Festival romance that began 10 years ago led to a proposal in front of the main stage. Minds were at ease with an all-in-it-together attitude from the crowd in full compliance of the rules and sanitisation stations around the site. Impassioned speeches from bands and happy tears shed from as many rejoiced in the power of live music. Nu-metal upstarts Wargasm made their mark, Brighton’s Yonaka seized the momentand “A” reminded everyone “without care for each other we all have nothing”. Sheffield metalcore heroes While She Sleeps saw a sea of crowd surfers in a true watershed moment for the band. Creeper brought a theatrical goth punk show for the ages headlining the second stage to a capacity tent. As the beaming sun began to set the atmosphere was elevated to euphoric as the genre-melding Enter Shikari took to the stage. Embracing their headline status, they paused to let the moment sink in before embarking on a set of fan favourites, complete with confetti, incredible light show and pro NHS and anti climate change message.

Sunday main stage openers Saint Agnes wowed with a groove laden set and snarling guitar-smashing performance from frontwoman Kitty Arabella Austen. Elvana the world’s only ‘Elvis fronted Nirvana act’ featured a guest appearance from festival mascot the Download Dog. Skindred received a hero’s welcome and brought the return of Download Festival tradition ‘Newport Helicopter’ where 10,000 people swung their t-shirts in celebration. Frank Turner & The Sleeping Souls cemented his status as one of the finest songwriters of his generation and headlined the second stage. As Bullet For My Valentine took to the stage for a hits-laden set and their very own “scream for me Donington” moment with an galvanising rendition of Iron Maiden ‘Run to the Hills’  featuring a guest appearance from Skindred’s Benji Webb. The crowd were able to use what little voice they had left as they headed in for one last rock club sing-along at the silent disco. On Monday they will be able to leave the site and return to regular covid restrictions, where they will be required to submit a second PCR test in five days time.

This ground-breaking study will look to build on the evidence base gathered from the successful first phase of the Events Research Programme and apply findings on a greater scale with greater crowd numbers than before. The attendance at the Download Pilot will provide additional evidence for government, event organisers, and consumers on the logistical and practical considerations of reopening events safely, including multi-day events.