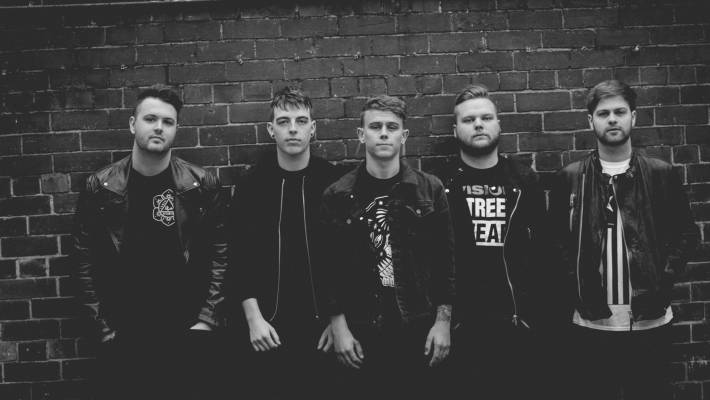 “We do this because we are a strong group of friends who love to make music, and because the feeling of people singing lyrics you wrote back at you is better than anything,” opines vocalist Oliver Swift. On the evidence of Day Old Hate’s newly released sophomore E.P, First Light, the amount of people singing Swift’s lyrics back at him and his bandmates is going to be on a steady increase. Born from the same musical genepool as fellow countrymen Mallory Knox, Lower Than Atlantis and Young Guns, Day Old Hate load their songs with roaring, satisfyingly chunky rhythmn guitar, bursts of sparkling lead guitar toplines and soaring vocal refrains that feel instantly familiar, in the best way possible. Here Swift answers the A-Z interview…

A Song Which Made You Want To Make Music: Papercut by Linkin Park. I think i saw it on CD:UK when i was about 10, id never heard anything like it. The video was awesome as well.

Best Album Ever Written: Hybrid Theory….Linkin Park (Again). Every song on that album is a banger.

Craziest Moment You’ve Experienced In The Band: Probably when we were put on the Radio 1 playlist for a week, that was just ridiculous! To be the unsigned band of the week and being played every day was just mind blowing.

Deepest Lyrics One Of Your Songs Features: ‘Hear my secrets and keep them safe, take these demons and wash them away’ (Secrets, First light EP)

Easiest Song You Wrote: No song is ever easy to write, i think the one that came together the quickest though was ‘First Light’, we must have smashed that out in an hour or so and then it just got a few tweeks before we recorded it. The idea was on Benj’s computer for months though before we jammed it out in rehearsals.

Favourite Show You’ve Ever Played: The Library in Leeds last April, it was our home town show and the turn out was just amazing. It was probably one of the first shows that we played where it made the hair on the backs of our necks stand up.

Guest You’d Most Like To Feature On A Your Record: Someone like Lynn Gunn from Pvris or Rou Reynolds from Enter Shikari would be awesome, we wouldn’t turn down Hayley Williams either if she was game…to sing OBVIOUSLY!

Happiest Moment In You’ve Experienced In The Band: Being Radio 1 play listed is probably the happiest moment, we’ve had a few good moments but i think that surpasses anything else that we have achieved.

Interesting Fact About One Of Your Members: Our drummers Nickname is ‘Balls’…… Ollie has ADHD (We think) and Will doesn’t like to buy rounds….

Jokes You Have In The Band: Josh our bass player gets a lot of stick, usually because he plays bass…he takes it quite well though. Most of the time we just muck about doing ‘Bo Selecta’ impressions.

Kicking Off Your Set Is Best With Which Song: First light is usually the one we play live but we will be mixing it up on tour this time around.

Longest Distance You’ve Travelled To Play A Show: I think London is the furthest we have ever travelled but its a fairly straight forward drive, Bristol on the other hand….

Most Inspiring Musician You’ve Ever Experienced: I think we all have our ‘idols’, as a guitar player mine would be Quinn Allman from The Used and Tom Searle from Architects, both very different guitar players but definitely my favourites.

Opening For This Band Would Be Ideal: There are loads of bands we would love open for, Mallory knox or Lower Than Atlantis would be pretty cool. We love loads of bands so whoever will have us to be honest!

Place You’d Most Like To Tour: I think we all want to go to the U.S at some point, our manager is based in Los Angeles so hopefully we will be able to go out there pretty soon.

Quote That You’d Like To Pass On To Readers: Don’t take life to seriously, you’ll never get out of it alive.

Reason For The Title Of Your Recent/Forthcoming Release: We struggled for ideas for a little while but as soon as we decided the order of the tracks we thought we might as well call the EP after one of the tracks.

See Us Live At: London on the 19th February is going to be awesome, the big one is Leeds at the Key club on Saturday 20th Feb.

The Old Days Of Music Were Better Than Those Current,  do you agree: I’m not sure,i think you look back with rose tinted glasses on in regards to the bands you used to listen to. I listened to some bands the other day that i hadn’t for over 10 years and the songs were a bit poo to be honest, the 14 year old me listened to some terrible music.

Variations You’d Like To Do On Any Of Your Songs: Id like someone to do a dubstep version of one of ours tracks, that might be interesting.

What Bands Have You Seen Live and Regretted: That’s a tough one as iv seen some shockers. Mindless self indulgence are definitely a band that springs to mind. It must have been 5-6 years ago but flipping heck they were atrocious, unfortunately for them i think the rest of the crowd made them well aware of how the felt about their music, felt a bit sorry for them in the end.

X-rays or any other treatments needed for band related in juries: Our guitarist Ben thought it would be funny to pick a fight with a lamppost, unsurprisingly the lamppost won and he broke his hand in three places (Idiot), apart from that we haven’t had any band related injuries.

You could have written any song in history, which would you pick: ‘In the air tonight’ By Phil Collins, because its the best song ever!!!

Zoo animal that best describes the personality of your band: A sloth….for obvious reasons.