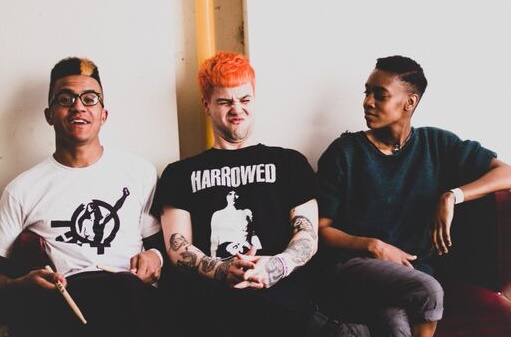 Birmingham noise-punk trio YOUTH MAN are extremely pleased to announce they have signed to VENN Records (home to releases from Heck, Marmozets, Milk Teeth, Moose Blood and more) the independent label established and operated by visceral punks Gallows.  A new EP is scheduled for release in Spring 2016 and will feature latest single ‘Pigs’ – the video for which can be seen below.

Commenting on their new signing, Laurent “Lags” Barnard of Gallows and VENN Records said: “Youth Man are as real as it gets – thrilling and uncompromising.”

“We’re chuffed to be working with Venn” add the band “We love the whole vibe and ethics of the label and it’s cool to join the family! Our new stuff is probably our favourite bunch of songs yet – we wrote most of it in the downtime between the festival season and our German tour. We haven’t actually recorded it yet but when we do we’re gonna set a stopwatch when we start tracking and only stop it once every single bit of every track is finished. The time that takes will probably be the title of the record. It’ll be our first vinyl release too.“

Having just finished a run of EU tour dates with German punks Adam Angst and KMPFSPRT, the trio return to the UK and will support Brighton band Tigercub on their extensive run of headline UK tour dates this November.

Fresh from a summer run of festival appearances including Montreux Jazz Festival, a slot of the Lock Up stage at Reading and Leeds Festivals and a raucous set at Wickerman, this caustic and visceral punk trio are out to defy conventions, perceptions and expectations of what makes a modern punk band.

Their dedication to presenting an honest and undiluted version of their music has led to them charming critics and audiences alike, with the new EP stacking up critical praise from Rolling Stone, Alternative Press, BBC Radio One, NME, Clash Magazine, Artrocker, Drowned In Sound, Rock Sound, DIY and many more.

Latest EP ‘Hill of Knives’ is out now and can be purchased here.