Barcelona Pop Punks, Daylight, have announced an October UK tour, along with the UK release of the album, ‘One More Fight’. 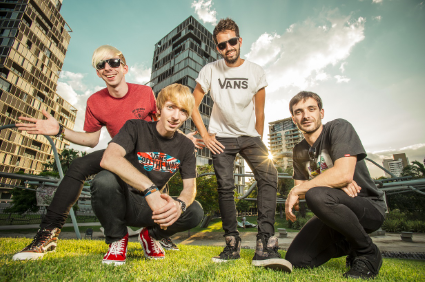 Barcelona Pop Punks, Daylight, have announced an October UK tour, along with the UK release of the album, ‘One More Fight‘.

The distinctive voices of the Burek twin brothers once again take over the vocal control. Their brand of fresh Pop-Punk, with catchy melodies and easy lyrics are squeezed into a 10-song album that challenges reality, and proves that good rock music can also be created in southern Europe.

Having formed in 2004, the unsigned quartet have toured all over the world, including Europe, Russia, China & Japan, as well as an appearance at Groezrock and headlining The X-Games, but this October sees the bands first visit to the UK.

The bands most recent album, ‘One More Fight‘ will be released in the UK on October 23rd 2015.

Produced & Mixed by Andrea Fusini (Upon This Downing, Ms. White, Ready Set Fall) beside Andrew Wade (A Day to Remember, The Ghost Inside, A Loss for Words), the band have produced their strongest album to date.

Inspired by the Barcelona lifestyle & attitude, Daylight went hard from their beginning. Their relentless drive, ambition, hardwork and passion turned their dreams into reality. With numerous appearances on the Spanish & European media networks (incl. MTV, RockZone…), Daylight went on to share tours with bands such as. Mcfly, MXPX, Reel Big Fish, The Ataris and Zebrahead.