Now, we all know that it is going to be a fantastic weekend but, we thought that we would help you out solving the ‘Who Should I See’ conundrum by providing you a ‘Bands You Need To See’ at 2000 Trees. This will be in three parts so buckle up, here is part one… 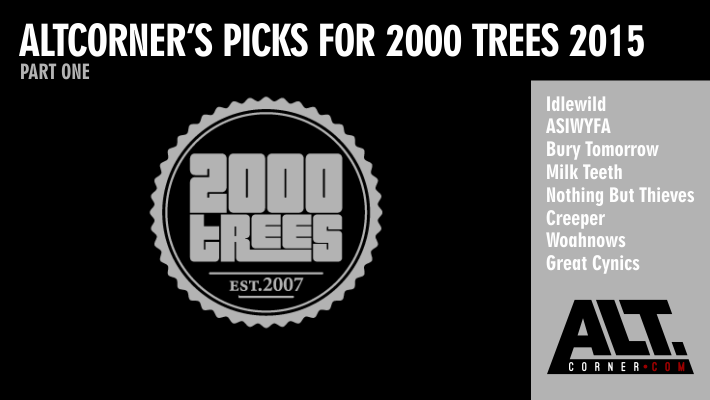 We are delighted to say that we shall be doing press coverage at 2000 Trees 2015; the Multi-Award winning music festival in the Cotswold Hills. The festival’s ethos of supporting upcoming and underground music for both the artists and the fans fit perfectly with the mission and purpose of AltCorner.
Now, we all know that it is going to be a fantastic weekend but, we thought that we would help you out solving the ‘Who Should I See’ conundrum by providing you a ‘Bands You Need To See’ at 2000 Trees guide. This will be in three parts so buckle up, here is part one…

Scottish indie rockers Idlewild have been around since 1995. Throughout their decorated career they have been always been known for their consistent quality of albums despite changing their style on numerous occasions. Their back catalogue is varied full of indie rock contemporaries to melodic rock, with tracks ‘American English’, ‘A Modern Way of Letting Go’ and ‘You Held The World In Your Arms’ making up some of their most famous to date. With new album ‘Everything Ever Written’ out now, Idlewild are a must see for both new and old fans.

And So I Watch You From Afar

Four-piece rockers from Belfast, And So I Watch You From Afar have carved out a well-deserved reputation from their enigmatically engaging live shows and unique blend of post-rock delirium. The setting of 2000 Trees will be the perfect place to witness their remarkable traits and will certainly be a band you should not miss!

Metalcore heavyweights Bury Tomorrow are sure to bring their A game for 2000 trees in the form of a ferocious set filled with tracks from their renowned back catalogue. Tracks like ‘Man on Fire’ and ‘Knight Life’ will blow you away and if you like your music heavy, look no further than Bury Tomorrow.

Where do we start with Milk Teeth? A band that has seen a quite meteoric rise in popularity which has been one of the most deserved amongst the UK scene. Creating a cocktail of grunge meets punk featuring dual lead vocalists, Becky and Josh who contrast and complement one another with Becky providing soft, delicious vocals that intertwine with Josh’s fierce and mesmerizing screams to create a real spectacle. Their mind-blowing live performance is one of the main sources for all of their critical acclaim so make sure you go see the next big thing in UK music!

A band brimming with talent and desire to create music on their own terms, Nothing But Thieves are the new connoisseurs of creating heartbreakingly beautiful music. Their sound derived from influences ranging from Foo Fighters to Ray Charles pits them in company with bands such as Soundgarden and Muse. Receiving backing from BBC Radio One and many other media outlets, it’s clear to see that 2015 is going to be a big year for these five guys from Southend.

Fresh off the back of playing Download Festival, Creeper are quickly becoming one of the biggest Punk bands in the UK. Their fresh and modern take on the Punk genre drew the attention of Roadrunner Records as the Southampton based five-piece recently joined their illustrious array of artists. Blood, sweat and tears go into their career with extensive touring aplenty and new material already being worked on, Creeper will no doubt show 2000 Trees just why they are one of the most sought after bands of 2015.

Woahnows have had quite some year. They have gained a member, gone on their biggest tour to date and have released one of the best albums of the year. Not bad for a bunch of Indie Punks from Plymouth, eh? Their live performance is concise, engaging and exciting so if you want a fine slice of Pop infused Indie Punk then look no further than Woahnows.

Based in London via Devon, Great Cynics are causing serious waves with their angst-fuelled indie rock. Latest album ‘I Feel Weird’ has received countless positive reviews and couple that with their impressive live show that they deliver as seen on their countless tours they’ve done already this year. You’d be a fool to miss them!