Over Christmas I decided to forget about the turkey and tiny Tim and turn my attention to music. Music that’s struck me, that I’ve listened to, seen live and want the world to know about them. Here’s a list of musicians and bands that I believe you should look more in to… 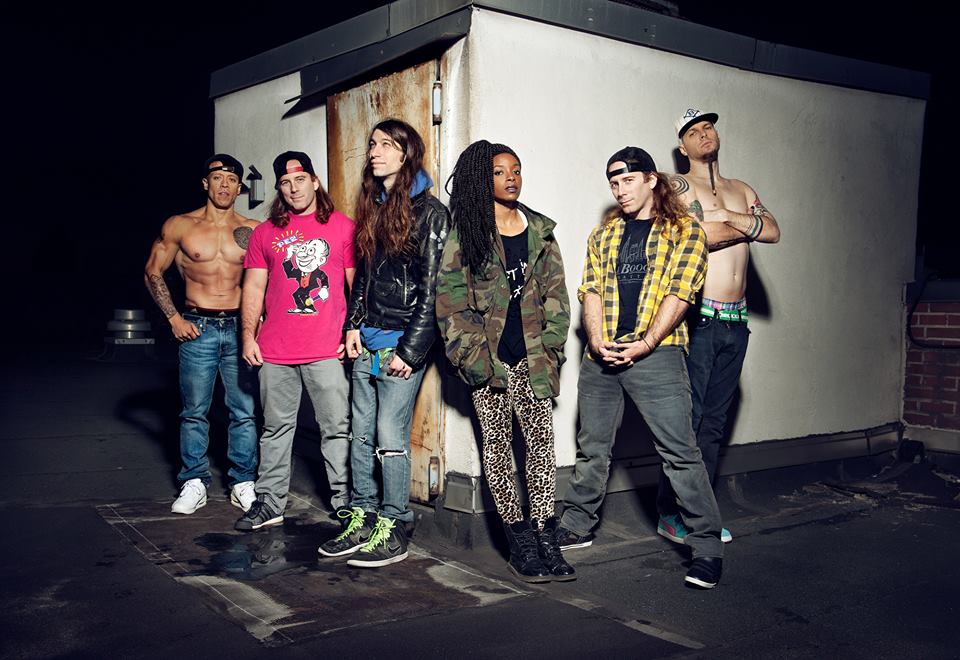 Over Christmas I decided to forget about the turkey and tiny Tim and turn my attention to music. Music that’s struck me, that I’ve listened to, seen live and want the world to know about them. Here’s a list of musicians and bands that I believe you should look more in to:

First up – heading outta Brooklyn are an eclectic mix of musicians who joined forces and made a huge impact on Social Media over the past few years. I first heard of these guys during that wonderful year of when Rage against the Machine got to Christmas number one. Tom Morello announced to social media that we could vote who would be their support bands – one member voted for these guys..

Shinobi Ninja are Duke Sims, Baby G both Vocals, Maniac Mike on Guitar, Alien Lex on Bass, DJ Axis Powers on Turntables and Terminate Dave on drums, They smashed the music scene in New York like the Hulk with debut of Rock Hood. Their name is growing ever more, which includes more live shows in NY and venturing further afield I the States. Keep your eye out for this band of rock stars and hip hop elite we need to have them tred the boars of the UK music venues.

Broken Hands:- Dale Norton – Jamie Darby – Thomas Ford – Callum Norton – David Hardstone
I witnessed these guys in a tent at British Summertime gig headlined by Black Sabbath. Away from that huge stage lay a small hut that was designed like a bar – on stage stood these guys. WOW their live show of pure rock was a superb experience, guitar riffs, rock vocals all just felt right. Since then I bought their debut album ‘Turbulence’ and witnessed them live once again and even bought the shirt. Their sound has a mixture if The Verve and Kasabian, attitude with soul.

Katie and the Queue
This wonderful musician has been playing for over three years, making new music Amercano blues style. Help from her Samsung galaxy phone by putting new tracks on her soundcloud account. Finally in 2015 we got to see a live performance. Held at The Fiddler Elbow – an historic musical venue near Camden Town. On stage sat Katie with her acoustic guitar and the drift of peace engrossed the room. Being one of her first gigs her nerves weren’t to be seen, her sense of humour was to be seen and her music was there for all to appreciate. 2016 will be a move to the next level for Miss Q, that will entail her debut album…we hope. So I ask you all to get in touch with Katie, listen to her music go see this Birmingham native LIVE as many more gigs are being lined up.

Up Down Go Machine
Musical legend Shawn Smith invited an unsigned London based act to support him in his London gig at Bush Hall in 2015. This band for thirty minutes rewrote the support slot procedure document. Up Down Go Machine is a mixture of Welsh siblings, one from Lincolnshire another from Kent. Lead vocalist Stephen Hallwood belting out every word as if his life depended on it. Their track Time to Fly offers the emotionally challenge a chance to shed a tear. Beautifully written songs pull at the strings such as ‘Shake me up.’ If you like your rock with a touch of folk, and you love to feel the music belting thought the speakers. This is the band to be checking out right now. Who needs manufactured one hit wonders when you have a special talent and such as these guys.

Ayron Jones and the Way
Seattle have always in my eyes had the hottest commodities in music, I don’t mean the style that appears on stage in front of millions of people watching on the tv or thousands in an arena. I don’t mean X Factor or any of the other reality shows. What I mean is pure unadulterated talent. Ayron Jones Guitarist and Vocalist with his band have rocked Seattle for many years, the second coming of Steve Ray Vaughan and Nirvana heart and soul in their music and Sir Mix A Lot loved them and offered to produce their debut album. They’ve jammed with the who’s who of Seattle musical royalty and this band will explode the sounds waves and we need to see them over here on this wonderful island of ours.

Star Anna
A Seattle musician who has yet to venture the shores of the U.K, one day she will. Star Anna’s music is powerful, the vocals mixed with guitar sounds is emotive and bleeds every word and every chord. I spent a short time in Seattle and had the privilege of witnessing Star Anna live. The experience was amazing, in front of a small crowd she played like very second was for me. Seattle breed musicians, not just normal musicians, but musician’s that have heart, soul and a mind that can touch those emotional strings. Star Anna has it all – Don’t just ask me – Mike McCready and Duff McKagan both have stated that Star Anna is the real deal.