An action-packed show is coming to Leeds next week!

Love It To Death announce stacked Leeds gig including Set Your Sights, Arrowhead, Harrison Rimmer and The Loose Cut! 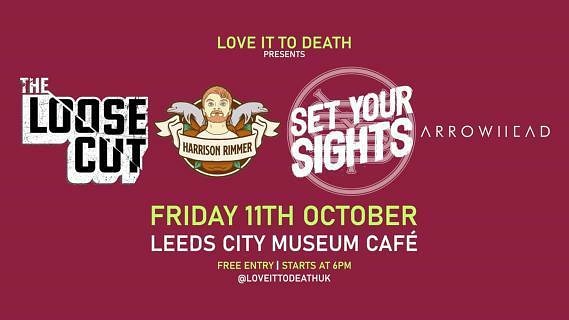 On October 11th, four bands will be performing a free show at Leeds City Museum Cafe.

NARC Magazine insists headliners Set Your Sights take you back to the days where Pete Wentz and the Madden brothers reigned sovereign over the emo-pop soundscape, and they aren’t wrong. Formed in Middlesbrough in 2012, they’ve a wealth of experience under their belts and are on top form, having recently released some of the best singles of their entire output.

The Loose Cut are a Leeds based band who have been making massive waves since their comeback, merging indie and blues with hard rock, while Harrison Rimmer hails from Fleetwood but was grown in York playing alt-rock for fans of Nirvana, Bruce Springsteen and Frank Turner to name but a few!

Having toured Australia, Europe and parts of Asia, Rimmer is a well-oiled gigging machine ready to unload on Leeds.

Arrowhead, meanwhile, insist they’ve been musically winging it since 2015, but their brand of ‘trashy rock’ says otherwise. From Manchester, they’re heading down to Leeds to show the city that the indie scene is alive and well in the UK.

It’s a night you don’t want to miss! Leeds City Museum Cafe is easily accessible from both within the museum and directly from Millennium Square. Entry is completely FREE, so why not head on down for some good music and a nice drink while you’re there?