Bands you have to see at Takedown Festival 2015 PART TWO are as follows: Arcane Roots, Zoax, InMe, The Blackout, Decade, DEAD!, Dirt and Colt 45 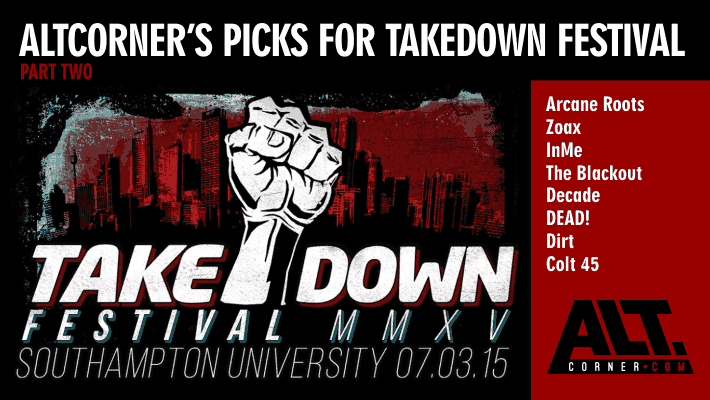 Takedown Festival has had quite a meteoric rise since the Southampton based festival began in 2012. Amassing high profile bands such as Lower than Atlantis, Funeral For A Friend, The Blackout and Skindred in recent years. However, it’s Takedown’s ability to find gems that makes the festival so special. Compiling some of the best upcoming bands and putting them on one bill is essentially Takedown’s quota. Over the years of Takedown Festival they have had bands such as Mallory Knox, Don Broco, Arcane Roots and Marmozets who have all gone on to be some of the biggest names in Rock music today.

This Saturday is the 2015 instalment of the Festival that promises to be a real highlight among the Festival season and year itself. We had a look at some of the best bands performing on 7th March and compiled a list of AltCorner’s picks of Takedown Festival 2015. There is also a Spotify playlist dedicated to showcasing some of the bands we’ve picked out which can be found at the bottom of the page.

Bands you have to see at Takedown Festival 2015 PART TWO are as follows:

Built on the mission of creating music that is fresh, exciting and new. Zoax mix their heaviness with groove and melody to set them apart from the monotony of the masses which populate the ‘rock’ genre. With latest EP ‘Is Everybody Listening?’ built upon enhancing their sound and using their whirlwind last 12 months as a band to create songs that are their best yet. They play the District stage at 13:30pm and are the perfect band to kick start your Takedown Festival experience with!

Overgrown Eden was released on the 30th January 2003 and hit singles included ‘Underdose’ and ‘Firefly’ amongst others such as ‘Lava Twilight’ and ‘Neptune’. Overgrown Eden played a pivotal part in introducing a lot of people to the world of alternative rock in a time of release where nu-metal was very much the genre of the moment. A 12 track masterpiece from start to finish, Overgrown Eden is an album that did not receive nearly half the recognition it deserved but for those have heard it hold it in the highest regard. An album often described as ahead of it’s time and cited as influences for many modern rock bands alike, InMe were pivotal and pioneers of Alternative rock in the early 2000’s. InMe hit Takedown Festival playing their debut album in FULL. Yep, you heard it right! IN FULL. They play the District Stage at 15:50 for an hour and it will be a highlight if not, THE highlight of the festival…for me though, it’ll be the highlight of my year!

The best Pop Punk band in the UK at the moment is what AltCorner thinks about Decade. They have it all from relatable lyrics, catchy melodies and damn-right head-banging hooks and that’s not even mentioning the sing-a-long factor to all of their songs! Their live sets are always fun-infused and entertaining as they waltz through hit after hit both from their early EP’s and critically acclaimed debut album, ‘Good Luck’. Decade play the Big Deal Stage at 18:45pm and bring your voices and best dancing moves because it’s going to be EPIC!

Formed as five lost boys living Southampton Dead! Are quickly making a name for themselves as a hard-working and consistent band who perform and release material of the highest calibre. We see them as the UK’s answer to Our Lady Peace. Touring heavily since their formation in 2012, Dead! Always put on one hell of a show so make sure you don’t miss this great quintet on the Obsidian stage at 19:00pm.

Making their first festival at Takedown Festival 2015, dirt. Promise to bring a barn-storming set to the Big Deal Stage at 15:00pm. Their sound is a mixture of You Me At Six and early-Mallory Knox as they mix their infectious melodies with hard-hitting instrumentals which become firmly engraved in your brain within a few listens. Their set is to be a massive occasion for the band and it’ll be a great moment to share as a fan so get on down!

The alt-rock/punk trio from Cumbria are playing on the Obsidian Stage at 17:20pm. Drawing influences from rock music throughout the ages ranging from Brand New to Fugazi to At The Drive, Colt 45 tailor their own take on melodic punk expertly. Their live performance enhances the energy and passion drawn from their recorded releases so they will be a band that should definitely make it on your list of bands to see.

Fresh, delicious and mesmerizing are just three words you can use to describe Arcane Roots. Taking influences from bands such as At The Drive in and Architects and mixing it with Brand New tinged with Biffy Clyro style hooks Arcane Roots make some of the most thought-provoking and inspiring rock music in the UK today. Their live performance takes their releases to the next level as they are mind-blowingly excellent from the start to the finish of every set in which they power through their arsenal of incredible tracks, making their appearance on the District Stage at 18:05pm a date and place you must be present for!

Much loved welsh rockers The Blackout announced they would be splitting up in December 2014 and Takedown Festival marks their last appearance on the South Coast. In their twelve stellar years as a band The Blackout have been ever present fixtures at the top of British rock music. Several performances at Reading Festival and the success of album ‘HOPE’ being just some of the highlights of their dazzling career. This set promises thrills, beers, tears and damn right crazy action from everyone’s favourite Welsh rockers.

Watch “Save Our Selves” here:

Listen to all of our picks for Takedown Festival 2015 on our Spotify playlist here: