Bands you have to see at Takedown Festival 2015 PART TWO are as follows: Allusondrugs, Rolo Tomassi, Three Times Over, We Deny, Forever Never, The One Hundred, Ashestoangels and Heart Of A Coward 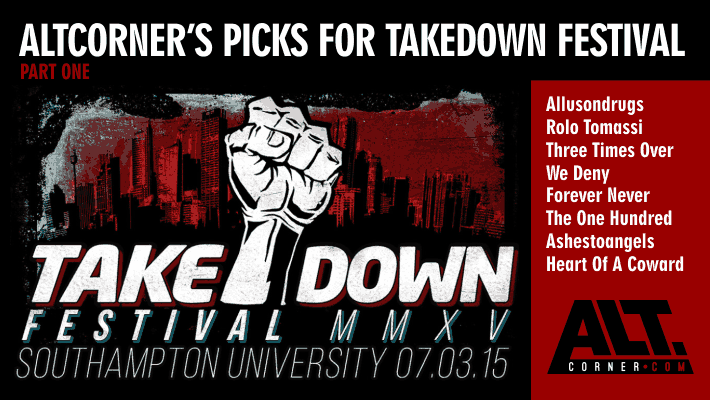 Takedown Festival has had quite a meteoric rise since the Southampton based festival began in 2012. Amassing high profile bands such as Lower than Atlantis, Funeral For A Friend, The Blackout and Skindred in recent years. However, it’s Takedown’s ability to find gems that makes the festival so special. Compiling some of the best upcoming bands and putting them on one bill is essentially Takedown’s quota. Over the years of Takedown Festival they have had bands such as Mallory Knox, Don Broco, Arcane Roots and Marmozets who have all gone on to be some of the biggest names in Rock music today.

This Saturday is the 2015 instalment of the Festival that promises to be a real highlight among the Festival season and year itself. We had a look at some of the best bands performing on 7th March and compiled a list of AltCorner’s picks of Takedown Festival 2015. There is also a Spotify playlist dedicated to showcasing some of the bands we’ve picked out which can be found at the bottom of the page.

Bands you have to see at Takedown Festival 2015 PART ONE are as follows:

Quickly gaining exposure for their unique and varied-influence brand of grunge rock, Allusondrugs are a band that seriously has what it takes to be big time players within the UK rock scene and beyond. Fresh of the back of supporting Enter Shikari on their ‘The Mindsweep’ tour Allusondrugs shall be playing the Obsidian stage at 18:10pm and it will be a fun-fueled set advocating that grunge is certainly not dead and is very much alive.

Watch “I Should Have Gone To Uni” here:

It’s scary to think that Rolo Tomassi have been a band for 10 years this year and my word what a career they’ve had. To date they have released three albums that have certified them as heavyweights amongst the ‘mathcore’ genre and with fourth album ‘Grievances’ out in June, 2015 could see Rolo Tomassi return to their perch as champions of UK ‘mathcore’. Their live performances are nothing short of epic and if you want your mind to be completely blown go see them on the District stage at 17:05pm.

The four-piece pop rock outfit from Eastleigh near Southampton have taken the UK by storm with their infectious melodies and pop-driven choruses reminiscent of pop-rock heavyweights Goo Goo Dolls and Gin Blossoms mixed with a bit of The Calling. These guys are truly awesome and with a new EP in the works, 2015 could be a breakout year for the pop rockers. Catch them on the Southampton Music Stage at 16:10pm and stay tuned with AltCorner for an acoustic recording of one their songs which can be found on our YouTube channel very, very soon.

Female fronted We Deny will be tearing up the Southampton Music Stage at 16:50pm with their party-like pop punk upbeat sound that will make everybody who is present move their body in some way either by head-banging, hip-swaying or dad dancing…We Deny will make you move! Vocalist Loren Mancini’s explosive and melodic vocals intertwined with the stellar instrumentals and luscious guitar licks proves that we can’t deny that We Deny are going to take UK Pop Punk by storm.

After ending their two-year hiatus this year, Forever Never are back! “After taking some time off we soon realized that we couldn’t simply NEVER do this again” is what Guitarist, George Lennox told us when we interviewed them here. They play on the Southampton Music Stage at 18:10pm and they are guaranteed to bring out their best material which could include one of, if not both of their wonderful covers of ‘You’re The One’ and ‘Mr. Boombastic’. Fun? Check! Rocking? Check! Forever Never? Check!

If TRC and Enter Shikari had a baby they would probably sound a lot like The One Hundred. Their rave meets hardcore sound provides for a face-melting rollercoaster of a listen…and that’s just on their studio recording. When performing live, The One Hundred have the potential to absolutely steal the show at Takedown. They have been touted frequently as one of the most promising bands in recent times and we completely agree! So make sure to check them out when they headline the Southampton Music Stage at 22:10pm.

Synth-Goth-Punk rockers Ashestoangels are playing the Obsidian stage at 15:40pm and their set promises to take Takedown by storm! Already amassing a large following of fans, their sound is infectious synth-infused punk that is quick, hard-hitting yet easy to sing-a-long too. They always bring a party-like atmosphere to their live shows and always cause a near-riot so they are a band who is definitely worth checking out!

Listen to “Bury Us In Black”:

Heart of a Coward

Metal Heavyweights Heart of a Coward are to headline the Uprawr stage at 21:10pm and with right! Their quite meteoric rise since forming in 2009 has been both remarkable and thoroughly deserved. Renowned for their undisputed ferocious live shows and critically acclaimed songs, Heart of a Coward will be the perfect band to see if you are firmly in the metal corner at Takedown Festival 2015. Let the pits begin!

Listen to all of our picks for Takedown Festival 2015 on our Spotify playlist here: