2016 has seen some incredible tours with the likes of Motionless in White, Alter Bridge, Feeder, FVK, Pierce the Veil, Yellowcard and many, many more gracing our shores. Here at AltCorner Towers, we’ve put our heads together to pick the stand-out runs of 2016 with some of your help, and let me tell you, this […] 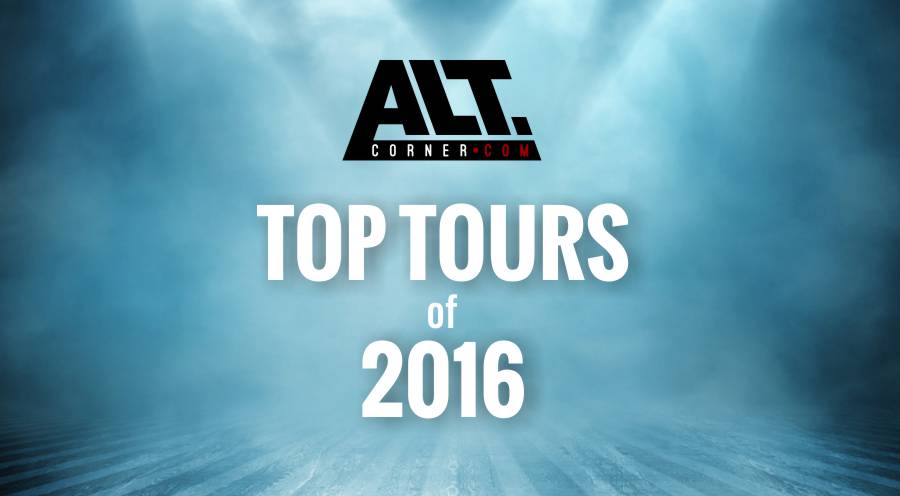 2016 has seen some incredible tours with the likes of Motionless in White, Alter Bridge, Feeder, FVK, Pierce the Veil, Yellowcard and many, many more gracing our shores. Here at AltCorner Towers, we’ve put our heads together to pick the stand-out runs of 2016 with some of your help, and let me tell you, this was REALLY hard!

First up has to be the incredible Heck/Black Peaks co-headliner in September. Both bands are absolutely incredible and caused carnage on the entire tour! There is never a moment when you’re not on your feet or someone (we’re looking at you Heck!) isn’t trying to climb on any and everything in the venue. You can check out our review from the Cardiff show here. We loved every second of it and we think this should be an annual thing, so same time next year lads? Yeah? Cheers!

Alter Bridge hit the UK hard this year! Following the release of The Last Hero in October this year, the tour consisted of not only Alter Bridge but Like A Storm, Gojira and Volbeat! So that is one hell of a bill! The date that we attended was also recorded for a forthcoming live CD so our claim to fame is that we will be singing on record with the one and only Myles Kennedy! This really was a night for everyone though, all four bands were vocally brilliant and had something to cater for every fan in the venue! Check out our Cardiff review here.

Elessar are a young alt-rock band from Gloucester. The quartet headed out onto a December run and for the date we attended in Cheltenham were joined by All Ears Avow (who were saying goodbye to the tour) and Speaking in Shadows who were continuing on the tour. For a band that are still relatively new (only formed in 2014), they have a very tight live show, full of emotion (and that infamous Bloodhound Gang cover. If you haven’t seen it, YouTube it. It’s brilliant!). All the bands on the run are very talented and show UK alt-rock has a bright future, you can check out our Cheltenham review here.

Facebook user David Butler says; “I went to see Feeder last month. It was my 15th time seeing them but first since 2001 and first time seeing them without Jon Lee. I was a super-fan back in the day and was quite nervous about the gig… what if I didn’t like it? What if didn’t live up to expectation. Well it did and it was a great reminder of how much I enjoy seeing bands in small venues too. Best show of the year ”

Facebook user Caroline Ackerboom suggested Creeper because she loves Will’s voice. We have to agree and because they’ve been on tour so much in 2016 (supporting Neck Deep, Andy Black and Pierce the Veil) as well as cracking America (we won’t go on about ALL their achievements here just because there would be an entire page full and I’m sure you already know them). We’ve chosen their headline tour from February which, believe it or not was actually their FIRST headline tour! They have done a few individual headline shows prior to it but it was their first proper run! Their energetic live shows which never fail to amaze us combined with powerful vocals and catchy, relatable tunes meant that the Southampton sextet just had to be included in this list. Not seen them yet? Well headline tour number two is set to take place in March and is already almost half sold out…. You can check our review from the tour’s Newport date here.

Facebook user and photographer Alex Bock submitted this suggestion saying; “Because they lost one of their band members, Tom Searle, just a few months ago. Yet they decided to go on tour for him and at every show Sam and sometimes even Dan (Tom’s twin brother) talks about their loss and how important he was for the band. I really respect their strength, loyalty and love towards each other. You can feel that in every single song. They pour their heart and soul into each set and therefore I really respect them.”

We totally agree, it was devastating to hear about Tom’s passing but massive love for Architects for heading out on tour anyway (which we are sure Tom would have wanted). You can check out our review from the Bristol date here.

For their first UK tour, Ice Nine Kills brought along their friends in Affiance and Shields. This gave the UK audience to finally see the theatrical metalcore quartet in all their glory. Anticipation was high for the long-awaited trek across the Atlantic for the band and they did not disappoint. The band know how to put on a show and frontman Spencer Charnas can command any crowd with just the basic flick of a hand. You can check out our review of the Cardiff date here.

AltCorner writer Nathan Blackstone says; “My favourite tour of 2016 would have to be the UK leg of Biffy Clyro’s Ellipsis tour with support from Brand New. As a huge fan of them, a longer set from Brand New would have been nice but it’s still Brand New. I saw them at the final stop of the tour in London and they still managed to put on a great show despite the short set. Biffy Clyro took to the stage afterwards and showed why they were headlining the tour. A mammoth set full of huge songs that filled the already packed O2 arena. If you get the chance to see either of these bands live in 2017 then you just have to take it!”

AltCorner photographer Iona Finnie says; “My favourite tour of 2016 has been the Beyond Recall summer tour (I don’t think there was a name). I think that was the true moment I realised how as a band they could make you feel so different, make you feel confident about yourself. Not only was it just Beyond Recall as a band performing well, the supports (Altered Sky & Cry Excess) were both amazing as well finally giving me the chance to see both bands.” We reviewed the London date of this tour which you can see here. Their live shows are a spectacle and always full of crowd involvement. This is a band that are sure to achieve big things so make sure you keep an eye out!

AltCorner writer Kirsty Johnston says; “The best tour I’ve been to in 2016 was for me Sleeping with Sirens in Glasgow on their madness tour, Kellins vocals were insane! Who knew he could pull that off live! The guitarists came out into the crowd which was also great interaction. The supports were awesome too, especially As It Is!”