2000trees have given us some positive news – by revealing the remaining two headliners for 2020. 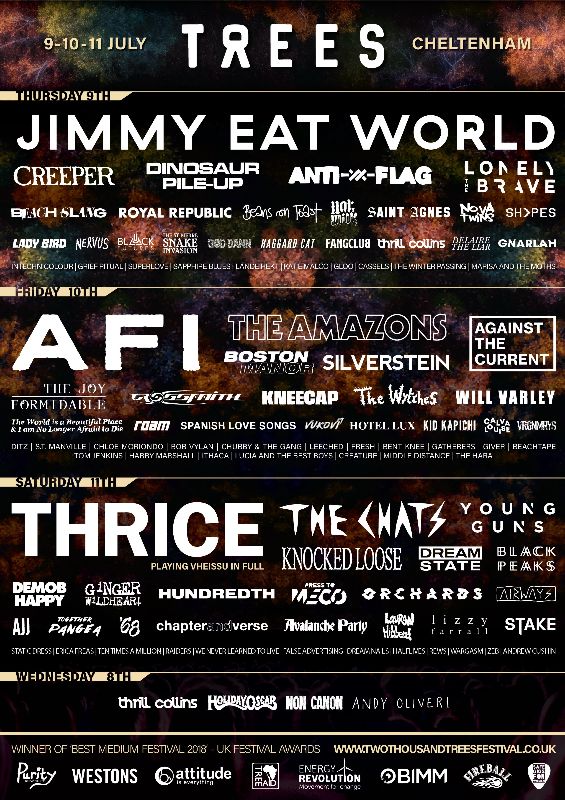 Despite all the uncertainty with the coronavirus pandemic, organisers at 2000trees are continuing on as normal for the foreseeable – and still hope the festival will go ahead as scheduled on July 9-11 at Upcote Farm.

Jimmy Eat World was the only headliner announced previously, and now there are two more stellar headliners with AFI and Thrice joining the bill to close off the days of festivities.

James Scarlett – one of the organisers – said: “Clearly these are difficult times in the World and indeed, the festival industry and it would seem that uncertainty is everyone’s new normal. However as it stands, we’re still super hopeful that 2000trees 2020 can go ahead in July as planned. Obviously we don’t have a crystal ball though, so we are looking into all possible options and should the ban on gatherings continue for the next few months, we may have to look at moving 2000trees to later in the year.  But again, as it stands, we sincerely hope this won’t be necessary.  As people can probably imagine, you don’t just magic a festival out of thin air the week before, therefore we are continuing to work behind the scenes on 2000trees 2020. This way we can make sure that, when we get the green light, we have everything in place to host an amazing party for everyone. And for an amazing festival, you obviously need headliners!

With that in mind, we’re very excited to let everyone know that when this has all passed, AFI and Thrice will be joining Jimmy Eat World as 2000trees headliners. Not only that, but we also have 16 more bands to get excited about.

For now though, the most important thing we can all do is keep looking after ourselves and in turn others, take advice from the experts and support the most vulnerable in our communities. Big love to everyone.”

AFI will be headlining the Friday and it is their first UK headline slot and first appearance at a UK festival for three years. Jade Puget said:  “I was reading that 2000trees was started by a group of friends who said, ‘We want to start a festival,’ and I think that’s amazing.

“I wish that would happen all over the world, because there’s less corporate interest and when it’s being run by people that clearly love music good things can happen. Even if it’s not the biggest festival in the world, those festivals are important and they’re putting bands on the bill that may not yet be able to play those huge events and that’s incredibly important to foster.”

Thrice will close proceedings on Saturday. They will be playing their acclaimed album Vheissu in full in a European exclusive. Dustin Kensrue said:  “Any time you can get a fresh take on the live music experience and not have it filtered through something that’s been going for too long is cool. I think this sounds really exciting, especially being out in the trees and the mud and all that!”