One of our favourite festivals; 2000trees (we still haven’t counted if there are 2000 trees, each time we lose count!), has revealed a load of awesome acts for it’s first line-up announcement of 2019! The festival is set to run between July 11-13 at Upcote Farm in Cheltenham. The first headliner announced are Brit rockers You […]

One of our favourite festivals; 2000trees (we still haven’t counted if there are 2000 trees, each time we lose count!), has revealed a load of awesome acts for it’s first line-up announcement of 2019!

Festival favourite Jamie Lenman will be opening and headlining the third stage on the Thursday with Lenmania 2, where Jamie will curate the stage, handpicking his favourite acts to perform in between both his sets!

You Me At Six rejoice: “We’re really looking forward to headlining 2000trees Festival this summer. We’ve heard many amazing things about the festival, in particular it’s unrivalled atmosphere and location. The lineup is always superb, so it’s going to be a pleasure to be a part of things this year. It’s going to be a special show.”

Keith Buckley of Every Tie I Die exclaims: “Hot Damn! has always been the one that put us on people’s radars and it was the one that was out the first time we came to the UK, so that’s a nice little throwback. When festivals are able to do something like this and get such a diverse lineup and secure a venue outdoors, it feels like something big. When you’re going to one of these as a fan of music and your whole surroundings feel so much larger than life it makes you want to enjoy the music. It make you really open to hearing new bands. You’re going to need these festivals, whether it’s to feed a fanbase or to make one. So I think it’s extremely important for the scene.”

Jamie Lenman adds: “I’m super excited to be bringing back Lenmania with a new twist and 2000trees is the perfect place to do it – a festival within a festival! The lineup of bands we’ve put together is completely awesome, from old buddies to new discoveries and everything in between, and it’s been great to get Trees’ input so we can assemble the best bill possible. It’s going to be immense!” 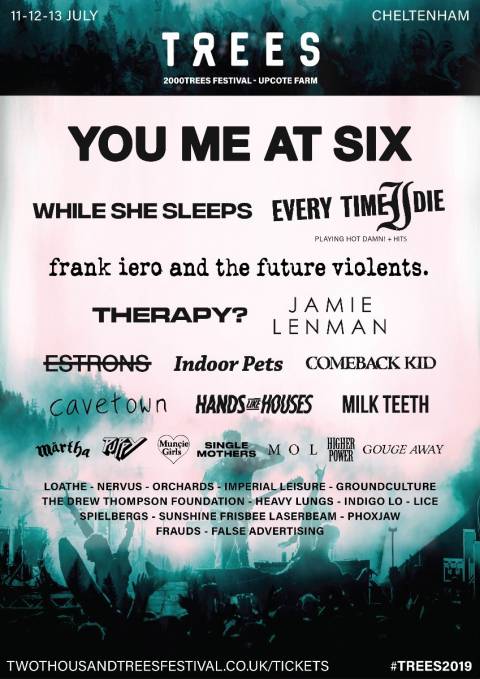