*FESTIVAL ANNOUNCEMENT KLAXON* 2000 Trees, based at Upcote Farm, Cheltenham, have announced the first wave of acts for this year’s festival, set to run between July 12-14! The first headliner announced is At The Drive In, which will be an exclusive UK festival appearance for the band, who are making history by being the first band […] 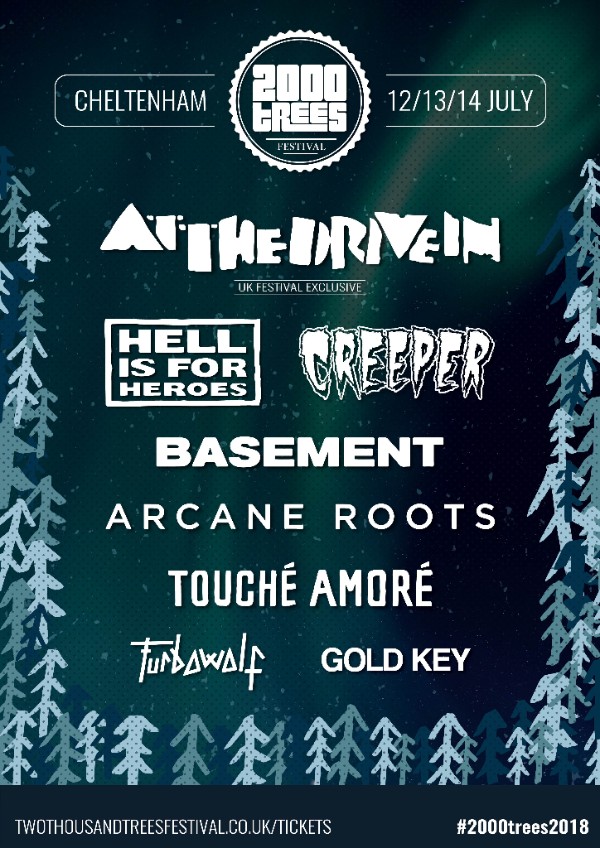 2000 Trees, based at Upcote Farm, Cheltenham, have announced the first wave of acts for this year’s festival, set to run between July 12-14!

The first headliner announced is At The Drive In, which will be an exclusive UK festival appearance for the band, who are making history by being the first band to headline the 2000 Trees main stage on the Thursday! Previously, the main stage has only seen acts on the Friday and Saturday, but now, for the first time in the festival’s 12 year history, it will be a full three day event, with all stages hosting acts on the Thursday!

Festival organiser James Scarlett says; “We’re very excited to announce that 2000trees Festival is now a full 3 day festival and for the first time ever we’ll be opening our main stage on the Thursday. I can’t think of a better way to do this than with our headliners AT THE DRIVE IN. Let’s not forget that this is a band that released arguably the most important rock album of the last 20 years (with ‘Relationship Of Command’) and influenced literally ALL our favourite bands in the process. That’s before I even mention their live show. The band are absolutely on fire right now, touring with the also brilliant Royal Blood on their recent UK dates together. At 2000trees Festival they’ll be playing a full length headline set and I for one cannot wait!”

At The Drive In drummer Tony Haijar adds; “We are super excited to being playing the 2000trees Festival this year. With the whole festival atmosphere changing in general, it is great to be part of something that still supports rock bands.”

Creeper frontman Will Gould says; “We are thrilled to be returning to 2000trees Festival this year, one of the first festivals we ever played together as a band. We have such fond memories of the festival from playing our first year in a tent and also from playing on the main stage. We’re very excited to be a part of this wonderful festival and can’t wait to return.”

Arcane Roots‘ Andrew Groves adds; “2000trees Festival has always been the highlight in our calendar since our band began, and has long felt like the spiritual home for our music. During it’s creation, we frequently envisioned playing Melancholia Hymns live there, and now, safe to say, we’re working doubly hard to put on the very best show that we can.  A show that, rest assured, will never be without a surprise or two. We cannot wait to return this year and bring our music home again.”

Will McGonagle from Hell Is For Heroes also says; “2000trees Festival always has the best lineups, and we’re proud to be part of this year’s bill. We’re looking forward to seeing loads of bands, and of course playing some of our favourite tunes too. We might even have something new to play.”