Female fronted band tend to get ignored by a lot of the main-stream media and even by the alternative TV and Radio stations. To readdress this in-balance I have compiled my list of the top ten female fronted bands in the UK that you NEED to see live. 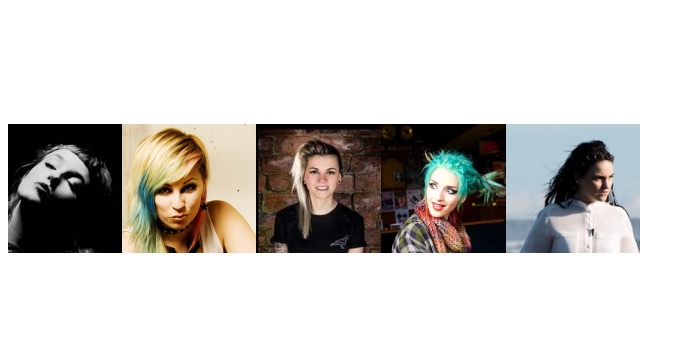 Female fronted band tend to get ignored by a lot of the main-stream media and even by the alternative TV and Radio stations.  They are always receiving the cliché critique of they sound like Paramore, Tonight Alive and more recently, PVRIS. Where as male-fronted bands often get a much fairer and reliable recommendation. To readdress this in-balance I have compiled my list of the top ten female fronted bands in the UK that you NEED to see live.

To be honest when going to gig I prefer to see female fronted bands (everyone that know me, knows this to be true) and the reason for this is that you get an all round performance and not just a show. They don’t do what a lot of what there male counterparts do: S.I.T.M. (stand in the middle), they move around the stage, they interact with the crowd, generally try to have fun and give you a performance. There are male singers who do move around the stage, but they often boss the stage where as female singers command it (there are expectation in both cases but I am generalizing here).

So with this, I have limited myself to ten and it was one of the hardest things I had to do…

This Cardiff based rock band always come out on stage and really give it their all. These guys provide a very heavy but sweet sound that is a joy to listen to live. With infectious rock guitar riffs that you will bang your head to and the lively energy of Danni Monroe’s stage presence and her powerful but easy to listen to vocals will have you smiling thoughout their set. After hearing ‘Requiem of the Drunk’ live you will find yourself sing it for days “La la la la la la let’s get drunk!”

This alt-rock band flirt with metal at times. They have a heavy beat that is a pleasure to listen to (they even have bass riffs!). They don’t shy away from riffs in their set and if you love guitar riffs you need to go and see them live. For such a young band they move around the stage like seasoned pros and know exactly how to get the crowd involved. Lizzie has a strong vocal which can serenade you or kick you in the gut when needed. These guys are actually have the added bonus of screaming vocals mixed in form Guitarist Mike. Currently they do a very metal cover of Pink’s ‘Get the Party Started‘ in their set which will get you off your feet.

Last time I saw them live was as Bannerman, Edinburgh on 29th October.

One of my favourite rock bands to see live. Tiggy (Tee Dockerty) will give you one of two attitudes on any given night. The first is a Jessica Rabbit, sultry strutting attitude that captivates your attention and hypnotizes you or there is the attitude of pure aggression where she attacks the stage. Her vocals are like a siren that always end up putting you into a trance. They don’t hold back as a live band, they assault you with ever single beat of  the bass. The heavy guitar riffs will make your bones vibrate in your skin. They really do love the crowd and really take time to involve you from the moment you walk in through the door as they always walk around the venue talking to everyone before they take to the stage. They end their set in true rock n roll style and I will not spoil it here for you, go to a show and find out.

These are a feel good pop punk band.  Eveline Verdegaal’s vocals are such a sweet sound that you can’t help but feel that she is out there just singing to make you happy. The guitar riffs have the effect of making you want to dance along. Although, I have said they have a feel good vibe the subject of the songs are not always in this vain and at times will have you relating it to troubles of your past.

Last time I saw them live was as at O2 Academy, Newcastle on 27th June.

Chloe Drinkwater not only posses an impressive energetic vocal with true grit but she knows how to command the crowd. When she is not playing guitar she is moving around and leading the crowd in singing, clapping and jumping around. The rocky drums have an infectious beat with the guitar riffs and hooks mixed in, that will really get stuck in to you when seeing this band live.

Last time I saw them live was as at Opium, Edinburgh on 3rd October.

They provide riffs aplenty and Katy Jackson has a really powerful voice which will entice you in. Their sound has this freshness about it with a chaotic feel but, it is not out of control or without structure. They rock out on the stage and are having fun while they are up there.

Last time I saw them live was as at Vans Warped Tour UK on 18th October.

This rock band have a stage presence that demands your attention and the way they move around on stage give an impression that they just want you to have a good time. With a drum beat that eats into your soul and Tasha Cowie’s infects your mind. The guitar play will suck you in to watch this band and you will not be disappointed.

Last time I saw them live was as at ABC O2, Glasgow on 5th June.

A full on grunge band that will hit you with dirty grunge guitars. Lauren  Tate has a dirty rock vocal style that she executes perfectly with that scream-but-not style of singing synonymous with Grunge. Grunge has come a long way since the 90s but most bands try to keep to the roots, Hands Off Gretel really capitalize on their generation in terms of high-quality and crisp sounds but the grunge aesthetic is still very much present.

This math-pop band sound unlike any other band out there currently. They fuse so much into there sound, pop punk, electo, pop, indie, rock and even a little jazz. They provide that complete sound where the drums, guitars and vocals have every hair on your body stand on end and make your chest vibrate. Ellie Price’s vocals are one that once you hear live you will never forget and add to this the harmonies with Mikey Webber and Alex Vanblaere and you will be blow away.

Last time I saw them live was as at The Garage, London on 24th October.

Anyone who knows me knows how much I love to see this band live. I have seen this band live twenty nine times (and counting). They bring a high-octave energy to their set, which is most prevalent in the way Ana Nowosielska bounces around the stage like Sonic Hedgehog in a pinball machine. The lyrics of their songs coupled with the beautiful vocals will resonate with your soul. They have really catchy guitars and a drum beat to keep you going all day. At any of  there shows when Ana asks you to raise your hand or jump, you will do so without thinking. I always leave their gigs with a smile and humming all their tunes for days after.

Last time I saw them live was as at PJ Molloys, Dunfermline on 20th September.