FAULTLINES are a six-piece melodic metal band from the UK. They released their debut EP ‘All We’ve Ever Known’ on the 15th April 2016. ‘All We’ve Ever Known’ sees Fautlines take on unique dual vocal harmonies of singers Christina Rotondo and Jake Noakes. The band certainly have a bright future and Ruby chatted to vocalist, Christina Rotondo about their formation, the future and performing live! 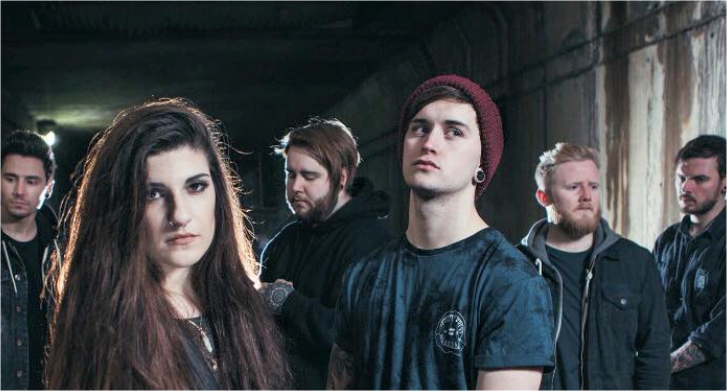 FAULTLINES are a six-piece melodic metal band from the UK. They released their debut EP ‘All We’ve Ever Known’  on the 15th April 2016. ‘All We’ve Ever Known’ sees Fautlines take on unique dual vocal harmonies of singers Christina Rotondo and Jake Noakes. The band certainly have a bright future and Ruby chatted to vocalist, Christina Rotondo about their formation, the future and performing live!

Benji, Sie, Oli and Chris were previously in a band called Road to Horzion who disbanded, and they decided it was time for a new vocalist . They found me (Christina) on YouTube as I post a lot of covers and i believe they saw a northland cover I did! After that we decided to mix up the vocals a bit we found Jake (ex Laguna sunrise) and became Faultlines. Faultlines was a name that road to horizon used for their previous EP. We threw tonnes of names around but found that was just the name that sounded the best and we thought why discuss over a new name for months that doesn’t feel right when we have a great name here?

How have the past 6 months been for you? Your latest EP has been out for a couple of weeks now, what was the response you were expecting with it being your first EP release?

It was really great. We’ve only really been a released band for a month or so and the response has been amazing. We’re already sold out of EPs and even our Merch is selling so quickly. We have people asking us to play shows all over the place and it’s so encouraging to see.

Do you have any tours dates us and our readers can catch you at anytime soon? It would be great to see you play some shows!

At the moment the only confirmed show we have is Busterfest in September (which is actually the same day as my birthday!) the line up is absolutely incredible, so we’d highly recommend coming down (and bringing some cake for birthday celebrations.) but in the mean time, we’re currently organising bookings and management for our band, and the minute anything is announced it’ll be straight on our Facebook page!

Who are your biggest influences as a band? And whose individual influence has the most influence on the band as a whole?

We all have such a diverse range of music tastes that range from the amity affliction, bring me the horizon to state champs and city and colour. Benjis music taste probably has the most influence on the band as he is the go to guy that writes all of our amazing riffs!

What is your favourite song/s to play live? …is it because of the meaning behind it or is it just a favourite?

Oh what an interesting one! I think for me it’s got to be ‘Call Me Home’. The minute that intro riff comes in it just gets me massively excited. I think it’s a really great distribution between screams and cleans with me and Jake, and it’s fantastic call-response for live shows. The middle 8 is such a good part to involve a live audience in too, so I’m looking forward to testing out ideas at more shows!

When writing your EP, what was the thought process? Are the songs lyrically related to yourselves?

The EP had a really good split between influences with everyone in the band. The way it was written was Benji and Chris would write guitar parts and bounce the file over to myself and Jake who would write and record demo vocals to it at home. During practice the rest of the guys who are all based in Wakefield vibe off it a live practice room and work on bass lines, tweaks to guitars and drums. After myself and Jake sent it between each other, it was pretty much complete unless anyone has any change suggestions, and then there’s of course even more tweaking once you hit the studio. Little ideas just crop up, you try different things and it’s the entire studio environment which makes the songs how they appear as the final product.

Could you pick the best moment you’ve had together as a band?

We’re quite a new band and we’ve only done one show , but I think our EP release show is going to be a gig we will find hard to forget. For a band that have members in all different parts of the U.K., it was so so busy. We’ve all been in other bands before and I’ve personally never seen a show that busy. The atmosphere was great, the audience was amazing and it was just an incredible first show.

What can our readers look forward to seeing from you this year?

Us progressing as a band. Watch out for Faultlines’ name – we’re going to try and get it everywhere we possibly can. Keep an eye on us.

Listen to their track ‘Drowning’ here: