Gareth here, I caught up with Tonight Alive on their Limitless World Tour in Glasgow, and I got to sit down and ask them a few question below… 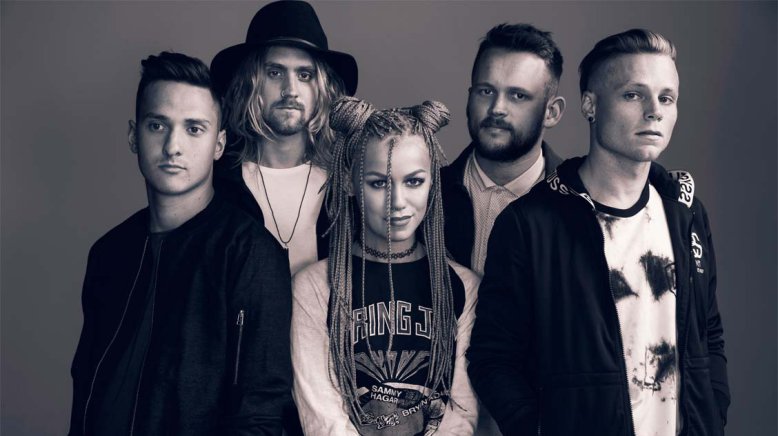 Gareth here, I caught up with Tonight Alive on their Limitless World Tour in Glasgow, and I got to sit down and ask them a few question below…

So guys this is the fourth date of the UK leg of your Limitless World Tour. How has it been for you so far?

Jake: Yeah, fantastic. I’m having a really good time. The run from Europe and the nights leading up to this. It’s been a year and a half since we played in the UK and its good to be back. The crowds have been sensational! The fans have been so responsive to everything, especially the new songs as well. Which is a really good sign for us.

Is their a certain song from your new collection that you look forward to in the set? …One that you think the crowd will really go for?

Whakaio: I think ‘Drive’ has been fucking awesome. All of them are really cool in their own ways as it’s a break from our old songs, just head-banging all the time! But, I think when we play ‘Drive’, everyone playing that song and the crowd are just really into it. I think it’s one of the biggest songs of the set!

Jake: ‘Free’ has been really good, as we open with free. It’s awesome to walk out to.

Whakaio: Don’t give it away bro!

Your new album ‘Limitless’ comes out on the 4th March. How will this vary from your last album, ‘The Other Side’ and how has your sound evolved on this album?

Whakaio: I think it varies in a lot of ways. I think one thing that we have done is really honed in on what Tonight Alive is, what its about and how we real realized what really effects our fans and us. It has been Jenna’s message, we have really tried to solidify that and make the music really support her message going forward. We realised that we didn’t want to be stuck in this one genre, of being one genre you know.  We have kind of pushed the boundaries in that fact and wanted to do our own thing. So we said why the fuck can’t we do a pop song? Why can’t we do a rock song and everything in-between. We have really just gone for it, we have written songs that we love, that we are proud to play on stage and Jenna believes in 100% and we believe in 100%. I think people are going to be surprised and I think it is going to take them awhile but, as it took us two years to get where we are now. We can’t expect fans to get there in one month. Once it comes out and everyone sits around and listens to it for awhile, they are going to love it just as much as we love it. Hopefully (laughs).

You guys seem to have a genuine connection to your fan base that transcends your music. How important is that to you? And has it on occasions overstepped that line?

Whakaio: I think it has taken a couple of years figuring out where we stand. Realising that we have done as much as we can in writing the songs, have the message that we do and the connection with the fans. But, it all does get a lot when you take on a lot of other peoples worries and qualms and all the stuff they go through. We now realise that our music set them on the right path and it’s up to them to kind of do their own thing. We can’t constantly take that on as it is so draining. And we are not psychologists either, we are just musicians.

Whakaio: But it is really important, like I was saying before. It’s the reason that Limitless is what it is because, we realised the effect we have on people and we want to have a positive effect. We want people to come to our shows and become empowered, believe in themselves and believe they can do whatever they want to do.

Being a band from Australia, how do you find the UK music scene?

Jake: It’s been the fastest place that has picked us up. The press over here is incredible, so are the fans. They are awesome. Three years of touring here and we are now doing really big venues. Having fans come out to muliple shows as well. There is this group of fans that are coming to pretty much every show and they were over at Amsterdam as well. It’s such a great, supportive scene for rock and alternative music that you can’t find anywhere else.

A lot of your fans get tattoos of your song lyrics. Did you ever think something like that would happen when you started out?

Whakaio: No (laughs) If they ever ask me to write it out or they ask Jake…fucking no dude (laughs). Your not putting that on your skin (their handwriting) but, Jenna’s got really nice writing. We would say to them. Just think about it for awhile and if you still love it after a month or two go for it. Don’t rush into anything but, if it helps them through something and they want to remember it then it can be fantastic. As long as they are happy, we are.

You have a few tattoos…

Jake: I was going to say (laughs).

Whakaio: (laughing) Yeah, it would suck for them to have terrible tattoos would it?

Is there any of those tattoos you regret?

Whakaio: I don’t regret any of them. I have some of the worse tattoos in the world but, I love every single one of them. I would rather have these terrible tattoos than have the best sleeve ever because, every single one of them means something to me. I think that’s really important. It doesn’t fucking matter what you look like or what they look like, as long as them mean something to you.

Is there anyone you would like to have as a guest on one of your records? Be it guitar, drums or vocals?

Whakaio: I know a lot of people give that band shit but, they are doing something right, they have a good songs.

I like to end the interview with a few either or questions. So, which do you prefer? Mosh pits, circle pits, crowd surfing or walls of death?

Whakaio: I can’t watch a wall of death.

Jake: Yeah, don’t like the thought of people getting hurt out there.

Jake: If the venue security is good then crowd surfing is awesome. but, if they are not it’s a disaster. So it can go either way.

Whakaio: I’ll say moshing but, what do you mean by moshing? Like swing your arms around, hardcore moshing?

Whakaio: That, that’s cool, I like that. It’s really cool when everyone is jumping up and down. It looks awesome.

Jake: Neither but, guitar.

Whakaio: We would do neither of those (laughs).

Tonight Alive’s upcoming album ‘Limitless’ is out on March 4, 2016.You can pre-order the album here: http://lnk.to/TALimitless