I had a sit down with the guys from Tigercub to chat about playing festivals, touring and new music. The whole band was interviewed; Jamie (Vocals), James (Drums) and Jimmy (Bass) who arrives slightly late to the interview. What’s it like to be back, after playing last year? Jamie: yeah it feels good, bigger stage […] 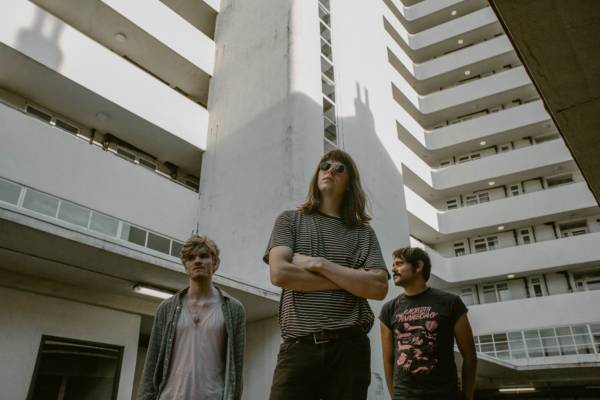 I had a sit down with the guys from Tigercub to chat about playing festivals, touring and new music. The whole band was interviewed; Jamie (Vocals), James (Drums) and Jimmy (Bass) who arrives slightly late to the interview.

What’s it like to be back, after playing last year?

Jamie: yeah it feels good, bigger stage this time. And we’re just really happy that 2000 Trees asked us to play again. Because it’s so sick. So many people come here for smaller bands or upcoming bands so it just feels right. Really happy to be back.

Is the focus on smaller bands, one of your favourite things about Trees?

Jamie: Yeah definitely, a lot of people that already know our band come here anyway. And when we just played there (Pointed to The Axiom stage), I asked if people had seen us before and loads of people said yeah

James: it’s also bad being in the artist area as well, because there’s so many bands that we’ve either toured with or played shows with, like you can’t move. We immediately bumped into Dinosaur (referring to Dinosaur Pile Up) and Pulled Apart (Pulled Apart By Horses)

Today’s (Thursday) lineup on The Axiom is showcase of alt-rock, stoner, psychedelic?

James: yeah I love it

You’ve got an acoustic set coming up, how do you approach something like that?

Jamie: I like to think that our songs work on a really basic level. It’s never too much of a struggle to transpose. It’s better with fuzz and stuff, when we’ve got heaviness but it’s also quite fun doing an acoustic set. And James is doing something cool this time around

James: we just didn’t want to approach it in that archetypical sort of way. I’m playing this little drum machine, and I’m putting fuzz on that so I’ve still got it in there somewhere.

What bands on this year’s line-up are you excited about?

James: Black Peaks, I think they’re just incredible. We toured with them, and every night you think you know how impressive it is and then you see them and they blow you away.

Jamie: We know them from back home in Brighton, my girlfriend went to school with Will their singer. So they’re just buddies. I’d recommend them, I think Frank Carter’s worth seeing. But you’re always in good company at Trees. It’s true and it’s honest, there’s no bullshit.

You released your debut album late last year. How have you seen the reaction to it?

Jamie: it’s helped us take that next step. I think people take us a lot more seriously now we’ve got a record out. And people have been living with the record for a while and they’re starting to come out the woodwork and turn up at our shows. All the shows are coming in and it just feels great. It feels it was really well received. Hopefully the record becomes something people treasure. We didn’t sell 100,000 copies but for an indie band we sold really well. It’s just been really cool.

Was it easier to play shows after you released the album?

Jamie: Yes. Because especially now people have listened to the record. And like I say people have come out the woodwork and said they liked it. We just played a show at Dingwalls in London and we played a couple of deeper cuts and everyone knew it. If we did something like that before the record came out we’d kind of be cold calling people.

James: Yeah it doesn’t always work because they’re not your crowd. You’ve got to play the game to win people over.

Be a bit more self-indulgent almost?

James: yeah it’s weird that, that 20 minutes drum solo worked its way in there, everyone was singing along. (cue impression of people singing along to a drum solo).

Jimmy: It’s totally different. It’s a double edged thing when people know your stuff and how it sounds on record, you’ve kinda got to meet them to be able to deliver. So that’s one negative I suppose. Maybe not a negative but something to be aware of.

James: But that’s kind of cool though, I mean it keeps you on your toes

Jimmy: you don’t have to stay entirely true to the record though. I remember seeing Eels at Rock en Sein. Do a pub covers set of their own songs which was really cool.

Jamie: It is nice though. I like to think we’re quite humble. We don’t take ourselves too seriously, we don’t expect anything. High hopes, low expectations. So everything’s a win. It’s just really cool to play shows and have people give a fuck about what we’re trying to do. That makes you want to carry on doing it.

You have quite a towering stage presence (referring to frontman Jamie’s 7ft figure), what’s it been like playing smaller venues and now bigger venues?

James: we’re all in the same boat really. We all love playing a big stage, I’ve really grown fond of that. It was quite intimidating in the first place

Jimmy: the Black Peaks tour. We were sandwiched between this absolutely brutal band in Employed To Serve.

Jamie: we’re too indie for heavy bands and too heavy for indie bands

Jimmy: we’re down this weird line. We’re really good friends with Black Peaks. They’ve been our mates in Brighton for years. It’s so nice to see what they’re doing. They’re going from strength to strength. And bless them they’ve always been good fans of ours and we wanted to tour together. So it was a great way to start the year. Not sure what show you saw us at (I answer with the London date) but there were some shows on that tour that were tiny.

James: Bournemouth was tiny. The thing is as well is that while a big stage is hugely satisfying to play. Floor shows just punk rock shows are absolutely class.

Jimmy: it can be great if 5 people are watching in a rehearsal room or on a massive stage.

James: what was that one in Germany? Munich? (nod from the other band members). That was so cool.

Do you play your shows differently in a smaller venue?

Jimmy: I guess so. When you’ve got people all up in your grill you’ve got to. On a show like today you have a very limited amount of time. Festivals are very strict with your stage times so it’s bang, bang, bang, bang, not too much talking. When we were out in Europe playing smaller shows it was nice, you could interact.

Jamie: As long as you could look them in the eye and put your flag in the soil and be like any takers. Just own it.

James: I really like just vocals through a PA and play with a back line, it’s how we have always done it. I like that

Finally what does 2017 hold for Tigercub?

Jamie: we were back in the studio between tours and just rolled the dice a little bit, took some risks. We used some drum machines and synthesisers and just tried to put ourselves out of our comfort zone. We’re just gonna release the fruit of our labour and see what happens

James: there will be another 4 track EP by the end of the year. The EP is kind of bridging to the next album. Before committing fully the EP is kind of testing the water.

So is it a change in sound slightly then?

Jamie: it’s called Evolve or Die (Out 29th Sept) and that’s our mission statement, going into the studio we just had to change. I feel like rock and punk rock can be quite conservative and quite nostalgic and we’ve been known as a band that can be quite nostalgic. I guess it was a conscious decision to try and find something that’s ours.

James: Alex Newport who we’ve been working with on the album and the EP, is really up for trying new shit out. And broaden our horizons. So we had this little window to work with him again and we thought we’d go full steam.

So the EP is a sort of test for this new sound?

James: yeah so we just don’t shit the bed on the new record.

Jamie: so we’ll be touring it and just trying to fucking claw our way up.