Thunder On The Left take on the A-Z challenge!

We asked Thunder On The Left to give us more of an insight into the band following the February 9 release of their fantastic album National Security by taking on our A-Z challenge! AK – Adam Kingsley (Bass) AD – Arun Dhanjal (Drums) CT – Carla Tully (Vocals and Guitar) A song that made you want to […] 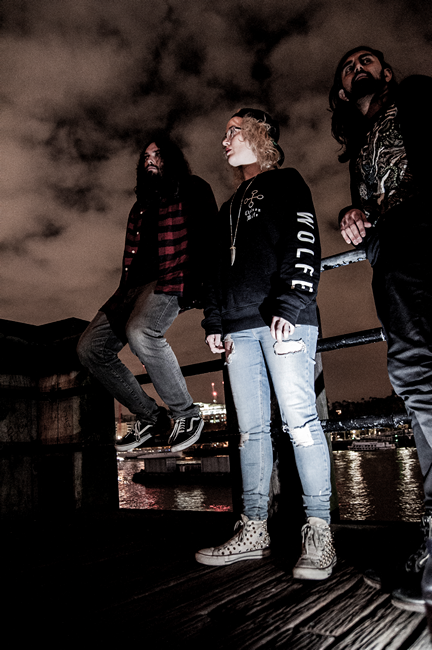 We asked Thunder On The Left to give us more of an insight into the band following the February 9 release of their fantastic album National Security by taking on our A-Z challenge!

AK – Black Dog – Led Zeppelin
AD – Little Sister – Queens of the Stone Age
CT – None to ref really, I have just always felt the need to write stuff down to exorcise it and guitar came after that

AK – I once witnessed a drug deal, right in front of the stage, during our set.
AD – I think What Adam said tops it, I thought they were just going in for a kiss…
CT – I once called out a sound engineer during our set, who was really sexist to me in soundcheck, and the audience all turned on him and started shouting at him. It was divine.

CT – All of Simply Eaten springs to mind

AK – Cliché, the bass part only has 3 notes!
AD – National Insecurity – that one fell into place drums wise, no thought required, it just came out of me
CT – It’s hard to recall writing any of them in detail so I am going to say they were all easy to write

AK – Our newest song is always my favourite…
AD – Same as Adam, The Dystopians is sickkk
CT – The Cognitive Map, despite the fact it nearly brings on an asthma attack, it feels worth it. I can always feel the energy in the crowd when it gets to the breakdown.

AK – David Attenborough
AD – Daniel Dennett so he can teach you about the easy and hard problem of understanding consciousness.
CT – Guests aren’t welcome

AK – You have to spend a lot of time not rocking out to epic jams in order to rock out to epic jams.
AD – Learning when to and when not to be in control!
CT – Pushing through the slog and keeping going

AK – We often use ‘D’.
AD – check under the door mat
CT – Throw the keys out the window

AK – We once played a show in an alternate dimension. It was really far, but also right next to us at the same time.
AD – That was a dream bro
CT – Elon Musk sent us to space in his Tesla, which felt pretty far

AK – Carla and I got to see Black Sabbath in London, getting to see Geezer do his thing in person was amazing.
AD – too many to mention, most music I listen to or see live is inspiring to me.
CT – I’ve seen a lot of bands live so this is hard to answer, I’d say the time I time-travelled and saw Elvis though.

AK – Chubby Thunderous Bad Kush Masters, rumour has it they’ve got an album coming out. I CANNOT WAIT.
AD – Worry from Oxford, trust.
CT – Worry, from Oxford also. They are set for big things.

AK – A nice long US tour, then Europe, more places in the UK, and Asia, South America too actually, Canada as well, Australia and New Zealand naturally, Greenland, The North Pole, Oz, everywhere really…
AD – yeah agreed
CT – 70 years in the future, when transport and travelling isn’t a thing and we could just teleport there

AK – “The sun don’t shine in your TV” – Daniel Johnston
AD – “For whoever has, more will be given to him, and he will have more than enough; but whoever does not have, even what he has will be taken away from him.”
CT – “Some cause happiness wherever they go, others whenever they go” – Oscar Wilde

CT – It’s wordplay on the term National Security, in that we are anything but secure.

AK – I used to think that way, turns out I just wasn’t looking hard enough. There’s so much great music happening right now, you just need to go to gigs! Do it now!
AD – completely disagree. I understand why someone would think that in terms of genre (e.g.: rock music) but you have to look hard enough to find it. Plus music these days is fusing in genre so there’s got to be something for everyone.
CT – In that you could actually make a living from it in the old days, well yes.

AK – We’re planning on selling bags of Arun’s back sweat along with bracelets made from hair found in the band’s shower drain. £20, bargain, any takers?
AD – that is actually so tempting.
CT- Vomit at this notion

AK – Without them our shows would be a lot less fun, anyone who gets off their sofa and goes to see live music is legend in my book.
AD – Everything, eternally grateful that they make the effort to come see us, support what we are doing and enjoy what we do.
CT – It still amazes me that people come to see us who are real fans – these three guys drove from Portsmouth to Reading to see us on tour at our BBC Introducing gig, that blew me away. People came to see us from Switzerland once and then asked me why we didn’t play ‘Sick’, soz.

AD – I split my finger open at our last show in Reading at the Purple Turtle, blood went everywhere – spent a couple of days with my finger bandaged up as I couldn’t bend it for a while, thankfully it has healed up now.
CT – Lost my voice on tour, found it again (thankfully)

AK – The van/car/uber would have to fall apart

AD – Leopard. Sneaky and stealthy in the shadows but fierce af when it strikes.