Things get interesting with SWMRS at Reading Festival

We caught up with brothers Max (lead guitar, vocals) and Cole Becker (vocals, rhythm guitar) of US rock band SWMRS following their 2018 Reading Festival set to talk returning to the festival, new music and how to be good Blink-182 fans when aliens get involved… How was your Reading set? Max: We played at 1:30. […] 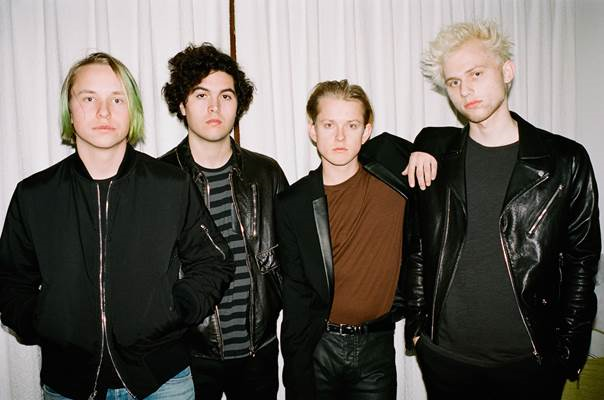 We caught up with brothers Max (lead guitar, vocals) and Cole Becker (vocals, rhythm guitar) of US rock band SWMRS following their 2018 Reading Festival set to talk returning to the festival, new music and how to be good Blink-182 fans when aliens get involved…

How was your Reading set?

Max: We played at 1:30. It was so fun! There were so many kids there. We’re not used to playing in front of that many people but we felt comfortable and it’s cool being filmed. It’s not a usual thing for us but we just kinda did our thing and as usual, 2 people or 2000 people, it’s the same show, we go crazy every time!

That sounds fun! It was your third time playing, how have you found it differs each time you come back to Reading Festival?

Cole: Yeah!! The first time we played it was probably to like 200 people, the second time it was probably like 1000 people and today was like 11000 people! Each time it’s been the same amount of people per capita, going nuts. So that’s cool because you don’t wanna play to a big crowd if they’re all just going to be standing there but if you go to a big crowd and the whole fucking place is going off, that’s cool as fuck! That’s heavy as you might refer to it!

You’re following the festival with shows in London and Southampton, are you looking forward to them?

Max: Yeah, we love those places! It’s the beginning of our cycle so we just wanna have some response, so we’ll play this tiny room, it sold out quickly, people are getting excited and we’re just getting the gears going. We’re setting the stage so to speak!

They’ll be so much fun! You released a new single Berkeley’s On Fire a couple of days ago, can you tell us about the track, it has quite a political message behind it.

Cole: I went to this protest. It was cool because we shut down this speaker who is a very hateful, terrible person.

Cole: He’s a fucking prick! But then someone lit a little fire and it was like “whatever”, it wasn’t that big of a fire or that big of a deal. But then my mom calls me and she was like “you need to get out of Berkeley, are you okay?” and I was like “man like is everything okay?” And I turn on the TV and it looks like the Watts Riots of 1966 (Los Angeles riots). They made it look like the craziest fucking thing ever! It wasn’t a riot, it was just someone lit a little fire. So then we realised that the news media is trying to scare you into acting a certain way and so we’re trying to make a song that scares the news media more than they can scare us. And that’s Berkeley’s On Fire!

Nice, it’s a good song! Does this mean that we have a follow-up album to Drive North coming soon?

Cole: It’s gonna be fucking nuts! Every night we would be biking home from the studio and this isn’t exactly how everyone’s gonna feel but it was how we felt and how we feel. We would just be talking and feeling from being in the studio and we’re gonna make the best fucking album of all time! This is the best album we’ve ever heard and we made it! So that’s a pretty cool feeling as an artist, to be able to say that your favourite, most significant piece to you is something you’ve made. There are albums that are untouchable and I don’t know if this will come even close, but in terms of our own personal album input and what we’re able to do, this is the greatest thing on the planet Earth!

Max: He’s trying to keep a straight face.. It’s true! We’re proud of what we did and what you are about to hear!

Nice, is there any ideas on a release date?

Cole: We can’t tell you that!

Max: You can expect it early 2019. We can’t tell you the exact date. We’ll be announcing something at some point (laughs).

That’s fair, so we can expect some form of an announcement at some point in the future.

We like to ask some random questions so if an alien comes down to Earth because it heard SWMRS were an amazing band, what one song would you give them to prove that point?

Cole: I probably wouldn’t play a SWMRS song! I’d have to give the mic to our boy Tom Delonge cause he is way more dedicated to aliens than we are!

Max: Yeah, I will not surrender, when God falls fast asleep.

Cole: Don’t waste your time on me, you’re already the voice inside my head.

Cole: *sings* Hey mom, there’s something in the back room, hope it’s not the creatures from above!

Max: That’s what we would share with the aliens and they can decide for themselves!

Cole: And then we would share a SWMRS song but Tom has been putting in so much work for the aliens! He’s been working on alien rights, he’s literally working on a constitution for those fuckers! I would not forgive myself if I stole Tom’s opportunity to shine cause we all want him back in Blink-182, let’s be real. Love Matt Skiba but Blink-182’s not the same without Tom Delonge. So if we had aliens come to us and they were like “hey, we wanna hear music” and we didn’t give them Tom Delonge, we would be terrible Blink-182 fans and also terrible members of the music community.

That’s fair enough! What Avenger would you be?

Max: Definitely Iron Man. I’m a Tony Stark kinda guy! I’m excessive, I like spending a lot of money that I don’t have. I like his style, his humour.

Nice Iron Man is cool! Do you have any hidden talents?

Cole: Depends on who’s asking. I don’t know… No? I like to read, I can read pretty well!

Max: You can dance pretty well, but it’s not hidden.

Cole: Yeah dancing, but I try not to hide it from people…. Oh.. you know what! *blows armpit raspberry* There we go! Armpit farting!

Interesting talent to have! You can have dinner with any three people, dead or alive, who would you pick?

Max: Matthew Mcconaughey, Tilda Swinton and Michelle Obama! Between those three people, you could probably rule the world!

That’s fair, some interesting choices! You have to name a new cocktail, what would you call it?

Cole: Jimgrle. Jimmy Grimble. It would be like kinda a take on a mojito but you put a little bit of wheatgrass shot in it to taste like you just ate shit on the soccer field so then it tastes earthy and gross but it really clouds the vodka… Is it vodka or rum in a mojito?

You could have written any song in history, what would you pick?

Max: My Humps by The Black Eyed Peas.

Cole: I’d have to concur.

I haven’t heard that in so long! Have you got any funny tour stories?

Cole: One time Seb (Mueller, bassist) told us to pull over in the middle of Canada and we had to get out of the car and he ran out, took his pants off and started pooping all over the fucking dirt road but at the same time, mosquitos were eating him and so, he had to figure out how to get his business figured out before he started getting mosquito bites all over his bum.