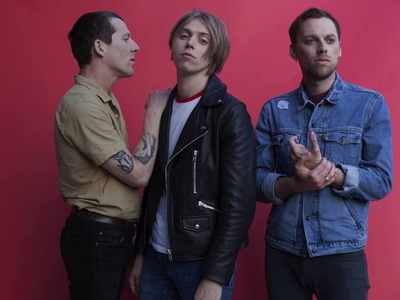 Following the release of their most successful album to date, we caught up with Murray (vocals/guitar) and Tom (drums) from The Xcerts, on the London date of their Hold On To Your Heart tour. The discussion varied from what it’s like to tour a successful album, writing the album and what it’s like to achieve success after over ten years as a band.

You’re coming to the end of what’s quite a long tour, what’s it been like on this run?

Murray: this run’s been amazing. The crowd reaction, the sizes of the crowds. There’s been a huge shift in how many people are coming to see the band now. The shows have been great until mother-nature took over (referring to the snow which has had an obvious impact on attendance). We’ve had to deal with the snow as well as sickness. A lot of sickness.

Our sound engineer got food poisoning; Tom had a cold at the beginning of tour; then our tech and photographer both got the cold and then I got this crazy bad sickness bug for a few days.

Tom: basically all of us have been down with something

This was meant to be your biggest London Headliner to date (the snow has impacted that), have you been looking forward to it?

Murray: we’ve been so excited by it. We were a little bit disheartened when we realised a lot of people weren’t going to be able to come but we just gotta go out there and have fun. It’s totally out of our control. We’ve got to go out there and do our thing and put on the best show possible for the people that have made it here from the cold. Because it is brutal outside, so fair play to anyone who has come to see us.

The tour is supporting Hold On To Your Heart, what’s it been like to see the reception to it on this tour?

Murray: unreal. When putting the set list together we had a big conversation as to whether we should play the whole thing or not. Maybe we should chuck in a couple of older ones. We were like we believe in this record as much as we do so we decided to play the whole thing.  And it’s been really interesting, from the off people just wanted to hear the new stuff really.

Murray: you read what people are saying online. But that’s not the best gage of what people actually think. At these shows people are screaming every word back already. We are really appreciative of that and it’s been the best response to a record we’ve ever released.

You’ve been around for a relatively long time. What’s it like to have your first top40 hit with this album?

Murray: It’s made us disgustingly arrogant and egotistical. We like to remind our crew every day that we’re a top40 artist.

Murray: it’s incredible, especially because it’s our fourth record. We kind of have no right to being doing better than we have done. There’s a lot of bands that don’t even make it to their fourth record. Let alone release that album and have it go top40. But also it’s something we have been working towards for half our lives. We’ve never had a shot at chart success before, so it was funny when we caught wind that we could actually make the top40. Then we really wanted it. It was a really stressful week. As surreal as it is, it also feels like we have done an immeasurable amount of work to get here. Top40 may not mean much to some people, but it can have a huge knock on effect for a band like ours so it was a really big deal. We mention it pretty much every day.

Was there any a point before this album that you thought it might not happen for you?

Tom: we didn’t even think of the top40 thing before it was mentioned to us. I don’t think there was ever a point where we thought we might be packing it in between albums. There was a lot of good will towards the last album and that was encouraging. In truth every album has been a stepping stone for what has come next. It just happens that this stepping stone is a lot higher than the previous ones.

Murray: I think that we were always gonna make the record. But had we just stayed at one level, we might have been having a conversation (regarding the bands future) by now. We always said that if we regress of if we stall then let’s just call it. Our trajectory has always been on the up, just incredibly slowly. But since It Feels Like Falling In Love it has just snowballed. I think we have all felt this shift in how people perceive the band. In how many more people are listening to us and talking about us. So for us now this is where the hard work begins and where we have to prove ourselves as part of the big boy realm.

With the current crop of new UK rock bands, being the most exciting for a long time, do you think that has helped you as well?

Murray: We’ve never felt part of it wholeheartedly. We’ve always felt somewhat on the outside of it. Maybe because we’re not rock enough. We’ve always been too indie for the rock kids. I think with the fact that Marmozets and Don Broco released records around the same time as us. I think that good British guitar bands is a good thing for the music industry to see. That people do give a shit about guitars. There are passionate crowds that like these bands. I think it did do the world of good to be at the beginning of that.

Tom: in very recent history bands like Royal Blood have changed everything. They are undoubtedly rock music. So when people say rock music is dead, then that’s clearly not true. Also with bands like Architects doing so well. Technically in the grand scheme of things they’re a niche band. They’re a metal band. They’re doing the best. Having bands from Britain doing so well is encouraging for us.

Murray: I think also British bands in general are really loved at the moment. I think a band, whether you love them or hate them, like The 1975 have appealed to the rock crowd, the pop crowd and the indie crowd. They have opened doors for bands like ourselves who don’t necessarily fit in to one area. I think a lot more people are broadening their horizons. I also think hip hop is really push creativity at the moment. The fact that Kendrick Lamar is one of the biggest selling artists in the world is amazing to me. He is so on point with everything he sings about and production and sonically he is really pushing boundaries. I think the days of simple hip hop are done.

If we move on to the album now. When you initially started planning this album did you know or have the ideas to add all this extra production to it? i.e. the saxophone on Drive Me Wild.

Murray: yeah it was all discussed in the writing process. I predominantly write the blueprint for the song and then take it to the guys. Usually I have the extra sounds in my head. This time we knew we wanted more synths and whatnot but the three of us aren’t very well educated in that world. So Gary our producer he’s a whizz with that stuff, so he just opened a door to a whole new world of added production and bells and whistles. So we knew we wanted to simplify it a little bit. Pull back on drum fills and bass fills. Just the fatty bits on songs that weren’t necessary. We wanted to have a clean canvas so we can add all this stuff on top and create really lush textures.

In regards to the influence of this album, musically. What made you want to take this style to the forefront more so than in previous albums?

Murray: it was definitely came from the conversation of the 80s influence. All those records have so much going on but you don’t realise it. They sound super simple but it’s so layered, so thick and rich. So we were listening to a lot of this stuff and thinking why does it sound the way it sounds? How have they done this? There seems to be a lot going on but at the same time there isn’t a lot going on. It really was the influence of the 80s records that inspired us to add those textures.

When you listen to the album it is overall very joyous. Yet it is sandwiched between two reflective ballads. How did the structuring of the tracks on the album come about?

Murray: we’d always wanted to put The Dark in front.

Tom: there was a conversation about putting in the middle at one point but then we were like nah, it’s not right

Murray: our booking agent was like I don’t understand why it’s at the start of the record. We did try putting The Dark in the middle and Cry a little earlier. It didn’t work. The Dark was always intended to be a foreword to the album. Like the foreword to a book. It kind of sets the scene for where the record starts and then into the story of getting out of that (escaping the dark). It’s meant to be a blossoming flower, a boom of light when Daydream kicks in. With Cry it just seemed right. We could have ended on We Are Gonna Live. But Cry is an apology, not to one person, to a lot of people. When my friend passed away, I realised that little moments where you niggle with a loved one it’s not worth it. There’s not enough time in life to be mucking around like that. It just felt right and that song is really epic. It kind of echoes what The Dark does with the piano lines. It just made sense. If you loop the record it goes really nicely into The Dark.