In true festival style, the rain clouds are looming over Reading Festival but that didn’t stop us having a bit of fun with Scottish sweethearts The XCERTS! We spoke to Murray, Jordan and Tom about Reading, Late One Night and striving to get that mansion… How did your set go? Murray (guitar/vocals): It was brilliant. […] 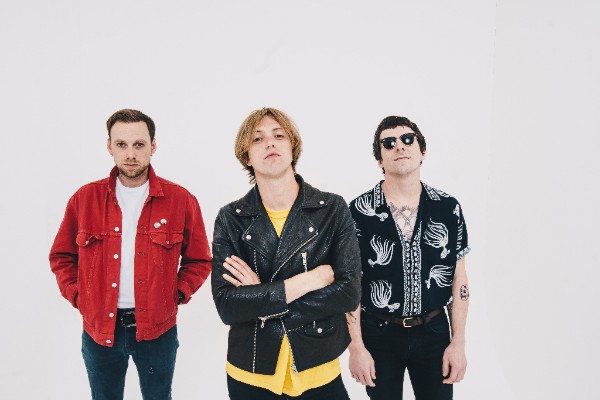 In true festival style, the rain clouds are looming over Reading Festival but that didn’t stop us having a bit of fun with Scottish sweethearts The XCERTS! We spoke to Murray, Jordan and Tom about Reading, Late One Night and striving to get that mansion…

How did your set go?

Murray (guitar/vocals): It was brilliant. Absolutely no complaints. We played last year where we found out the night before we were playing that we were playing the festival. It was very rushed and frantic. But today was very chilled and amazing. We had a great reception. We clashed with Bring Me The Horizon, which we discovered when we turned up, so we didn’t think anyone was going to be there but it was an amazing crowd.

Jordan (bass/backing vocals): Yeah man, they came out in force!

It was a great set! You’re doing an acoustic show in St Pancras Church later this year to celebrate the release of your Late One Night acoustic EP. What made you decide to do Late One Night?

Murray: We did a week of in-stores promoting the album (Hold On To Your Heart) in January where we played the songs stripped back. A lot of people said they really enjoyed it and our manager actually said “oh you should go into the studio and we should film it when you play these tracks in these versions.” We were like “Yeah cool”, we didn’t know what we were going to do with it and then the recording sounded really good to us so we thought we’d just put out a vinyl for the hardcore following. Really it was kinda a thing for people who like the band and they’re very organic!

Nice and you actually recorded it in one night too!

Tom (drums); And that’s where we got the name Late One Night!

Jordan; At one point during the recording, it was late so… (laughs).

How was it recording it in one night? Normally a recording process is more drawn out.

Jordan: It was kinda a nice reaction to the process of making the album which can be quite stressful. It was nice to just go in and do it in a night, it was very loose and a nice way to play the songs.

Tom: I usually sweat a lot when I play the drums but when we do them acoustically, I don’t sweat a bead! So it’s nice!!

You get the chilled job!

Going back to Hold On To Your Heart, how have you found the reaction to it since the release? It seems like every time you put a new record out, it just gets better.

Murray: We’re always striving to get our mansions!

Jordan: I’ve got my eye on the prize! (all laughs)

Murray: Exactly, so porsches, mansions, trips to Vegas on a whim…. That’s what inspires us to write better records!

Jordan: Capitalism, it’s all about capitalism!

You’ve got a tour coming up with You Me At Six in November, are you looking forward to that?

Jordan; And Marmozets as well! Murray: We met You Me At Six last year, we opened for them in Europe and we had never crossed paths before but we hit it off instantly with them. When they asked us to do the tour, we were like “of course!” It was only five shows originally but now there’s eighteen? So very thankful that they asked us.

It’s going to be such a good tour!

If you have to create your own Reading line-up, what five bands would you pick?

Murray: This is a weird Reading!

Jordan; This is a great Reading!

Tom: Mine is going to get weirder: The Cure!

Jordan: We need to get some younger bands on the line-up!

Murray: We’ve got a little something for everyone there!

Murray: The Cure will open and play for five hours!

Jordan: Tom Waites will play in the bar obviously.

If an alien comes down to Earth because it heard The XCERTS were an amazing band, what one song would you give to prove that point?

Murray: I would say Feels Like Falling In Love!

Murray: It kinda sums up our band perfectly.

Tom; It’s got a nice positive message of peace between intergalactic races.

If you could be any Disney character for a day, who would you pick and why?

Tom; the genie in Aladdin. I get to be Robin Williams and I get to just make whatever I want with magic.

Would you rather have written the Twilight books or every Nickelback song?

Murray: Be rich either way.

Jordan; Yeah, I think I’m siding on the Twilight books because that shit keeps multiplying.

Tom; And just think about the mansion really!

Jordan: Yeah. They both got mansions but I feel like whats her name (Stephanie Meyer, Twilight author) has got a better one than Chad (Kroeger, Nickelback frontman).

Probably! What Star Wars character would you be and why?

Jordan; Didn’t even miss a beat, just immediately “the best one in the film, I’ll be him”.

Tom: Tokyo. We only went once, a long time ago, but I’ll remember it forever. It was incredible! I love Japanese culture, it was an amazing experience. Konichiwa Tokyo!

Jordan; Live without the internet, hands down! Music is cool, internet is not cool.

Jordan; Unfortunately, all the music is on the internet now.

Tom: But all the internet is not on the music…

Jordan; All the internet is not on the music so it’s fine! You lose the internet, you lose all music, so there’s no music anymore, its a lose-lose.

You could have written any song in history, which would you pick?

Murray: Maybe Love Cats by The Cure. I kinda feel like that song is just completely other-worldly. I don’t know where it came from, there’s just so much intrigue in that song. It’s such a beautiful song with such a vibe to it that only Robert Smith could have written. I would have loved to have written that song.