The Broadcasts take on the A-Z Challenge 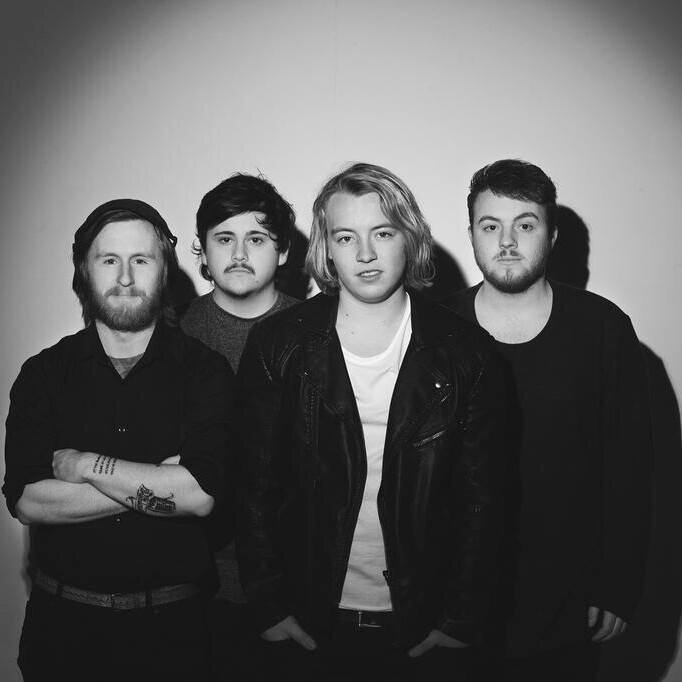 Born in Llantrisant on the outskirts of Cardiff, alt-rock/acoustic quartet The Broadcasts have entertained the South Wales music scene including support slots with Press To Meco. The band have also worked with acclaimed producer Stuart Epps (Elton John, Oasis) on previous singles Silvertown and Obstacles while signed to Right Recordings indie label, who they left in 2014 to pursue things independently.

We had a chat with drummer and backing vocalist Ashley Evans to chat about being paid in pizza and cute babygrows.

We all have many different reasons! James has been playing music since before he could walk as his Mum and Dad were in loads of bands so growing up, any songs by musicians like Neil Young and Tom Petty playing in the background is what made him start. Our guitarist Jack L has a very musical family, his Granddad is a musician and stand up comedian so that’s what brought him into the world of music, I basically used to get shown songs by Jack L, from lots of different bands from Good Charlotte and early Bowling For Soup, and we started listening to the same songs together, Jack was already playing guitar and we decided to start a band together with a few other friends at the age of 12 but needed a drummer so that’s what I decided to go for! Jack Isaac has only been playing Bass since July 2012, we were originally a three piece but were in desperate need of a bassist and it just so happened that Jack i had a dusty old bass in his house and picked up all of our first songs in one practice!

Best rider we’ve ever had … most definitely being paid in Pizza … Big Highlight for us!

Wow … there are so many to pick from hahah … Um, most probably being on our first UK Tour back in May 2015 and being outside a venue in Northampton, we were approached by THE most Del Boy looking bloke you could ever imagine, he whipped open his Jacket and asked us if we wanted to buy sets of Kitchen Knives … We politely declined. I think the entirety of our first UK Tour was pretty crazy, getting it booked, organising travel and where we’d stay each night, we’d never done it before but we definitely can’t wait to do it again.

That definitely is a hard one, a lot of our songs come from personal experiences but at the same time we hope that other people listen to them and are able to relate to them. Two spring to mind, we have a song being featured on the album called What It’s meant to me and that’s dedicated to James’s (our singer) Father who sadly passed away a few years back, the song is about reminiscing and looking back on good memories, it’s recorded live and such a great song, another would maybe be another one of our newest songs… there’s a lyric that reads “And it’s the bitter sweetness of love, like an alliance to a drug, and the way it’s all laid out is like a train gone off it’s track”, it’s from a song called Western Lands that was the first song we wrote as a four and it’s basically highlighting how bitter sweet it is being in a band, We’ve had the highs and the lows and the terrible gigs and experiences but on the flip side we’ve had some of the best times of our lives.

Easiest song we wrote would probably have to be the last song on our album What We’ve Become, it was written by me and James, James had some basic lyrics on his phone and we both sat behind a piano for half an hour in our old school putting this song together, the cleaners had to come in after a while to ask us to leave!

Favourite song in our set would probably another new one we’ve been playing for a while now called Down The Line, it’s just a fun song to play and there’s a class guitar solo in the middle with a breakdown and we just get super into it and you can always see the crowd getting involved which is fantastic!

Hardest thing about being in a band is trying to split working in a job and organising band stuff, but thats where our lord and saviour Whatsapp Group Chat comes in and it makes life that little bit easier

James used to eat a ridiculous amount of Cheese burgers, since then his nickname has been Cheese, the three of us even went as far as to actually buy him packs processed Cheese for his birthday one year, we’re still convinced it’s the best present he’s ever had.

There are seriously way too many, and I mean that, there’s honestly never a moment where we’re not quoting movie/tv show lines to one another, taking jokes way past the point that they’re funny for anyone else apart from us or just absolutely ripping into each other

Don’t make stuff up, if you write a song based on something that’s just made up and you’re guessing how you might have been feeling if you were in that particular moment then it doesn’t always work, just go by something that’s true to you and the words will flow.

Our furthest distance would probably be Leeds, but we plan to change that this year

We’ve seen? Catfish and The Bottlemen…a few times now, they started playing the dive places and eventually got picked up through BBC introducing and have been going for such a long time, to see them achieve everything they have done makes us think that perhaps one day we might be able to get up there too

A new band to look out for would be Fire Fences, a band from Bridgend, South Wales with some class songs they’ve been good friends of ours for a year or so now, they’re so hard working and just great guys to chat to!

Biffy Clyro … can you imagine .. like seriously, Jesus how amazing would that be. We’ve grown up with this band, that would be a dream come true right there

USA USA USA … What a place, to go around from city to city just playing music and getting a chance to see everything and experience everything, now that would be good.

‘Don’t be a dick’ … that comes directly from us, if you’re out playing a show don’t forget to thank the sound guy even if you weren’t overly happy with the sound, be sure to stop and speak to people who tell you they like your music and chat to them at the bar, give them a free CD, don’t be arsey with promoters, stay that extra 40 minutes for the last band and chat with them, make friends and swap info, we’re all going for the same thing here, so in conclusion just don’t be a dick

Our upcoming debut album is self titled and that has absolutely NOTHING to do with the fact that we couldn’t think of one … okay so it does a little bit, but only a little, we wanted to just make sure people had something that had our music on, not worry for ages about what to call it and that they remembered our name.

We had a baby grow made with our logo on for our youngest fan (6 Months old) … cutest thing you’ll ever see.

Would love to hear a dance remix of one of our songs also there’s a guy online that takes requests and covers your song as an 8-bit track … think we’ll get that done next!

They are the best thing about this band, without them we wouldn’t be here. They come to our shows and they spread our name and they buy t-shirts and listen to our track and they’re amazing. We want to continue to impress them and make them proud of us and hopefully pick up some more along the way

X-rays or any other treatments for band related injuries?

We used to Skateboard quite a lot, 10am train into Cardiff every Saturday morning, Skate Skate Eat our sandwiches Skate Skate Skate until late in the night, the worst injury from that would have to be seeing James’ wrist bent into an S Shape … gross