Tarah Who take on the A-Z challenge

Grunge rockers Tarah Who? have a new EP Half Middle Child Syndrome and to celebrate, we asked the trio to give us an insight into their world by taking on the A-Z challenge! A Song Which Made You Want To Make Music: TGC: ”Wake Up” – Alanis Morissette. MP: Boys Don’t Cry. Classic. CH: Amaranth by […] 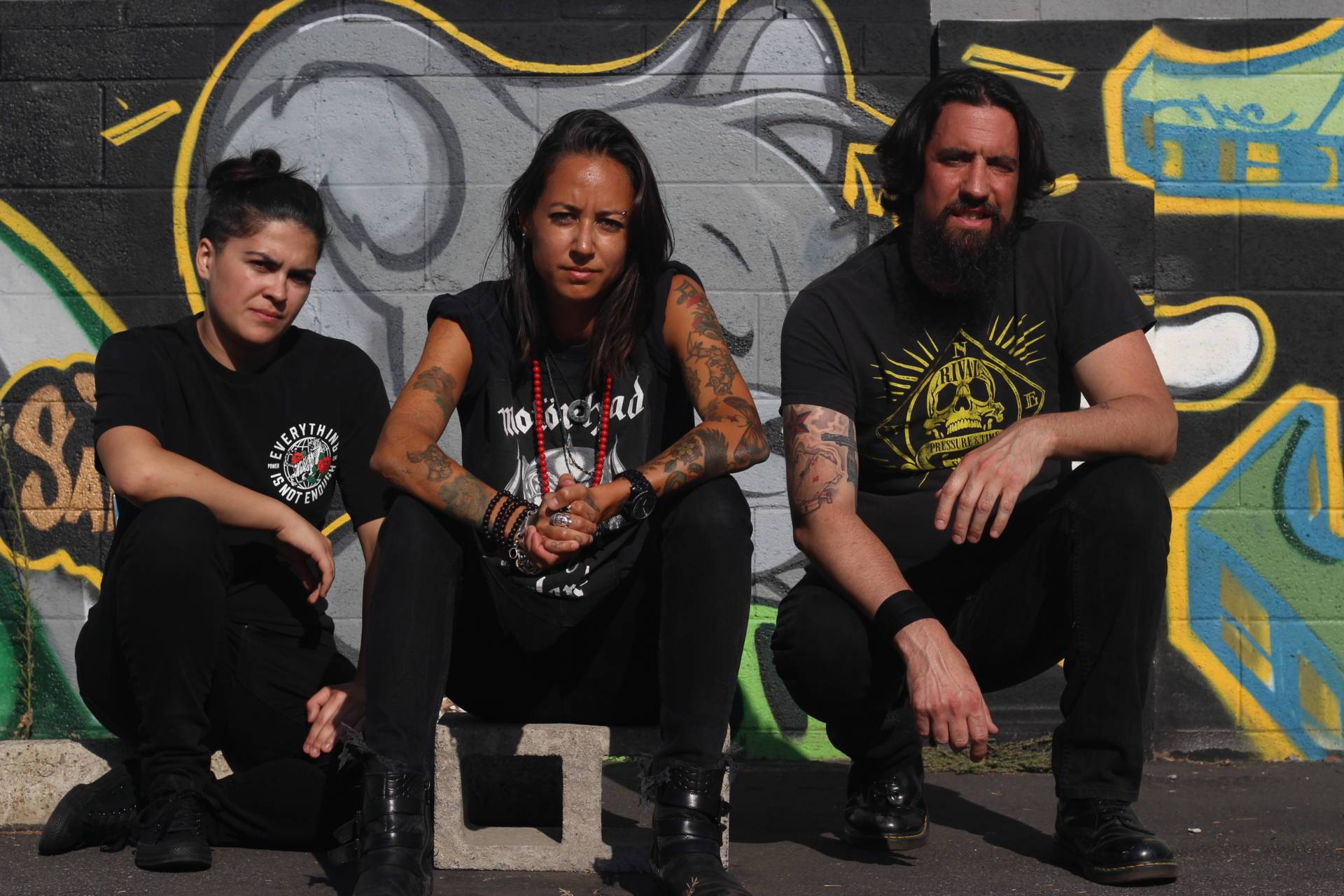 Grunge rockers Tarah Who? have a new EP Half Middle Child Syndrome and to celebrate, we asked the trio to give us an insight into their world by taking on the A-Z challenge!

TGC: I think our London show in a hard core punk rock bar. The crowd was throwing toilet paper during the previous bands so, by the time we got on there was TP everywhere! That night, a woman broke her arm, everyone was drunk, we played all of our songs really fast, my hand was bleeding, the bass player was kissed up on stage. We improvised the whole set and really, we didn’t know what was going on. It was really really fun!

MP: We had to get to a gig by going up a ski lift in Big Bear. Not that I’m afraid of heights but that was a crazy ride!  Had to put some of our equipment on the lifts too.

MP: Human to Be

TGC: Humm… considering that all of the songs are very personal, most of the songs seem deep to me . On a more general aspect, I would say:

“Unbalanced”: I was thinking about how unbalanced we are. We either do too much or not enough. I am also referencing to “Imagine”. Because everyone knows the song and sings it until this day. All the words still apply, and I wish that everyone who sings and loves this song, would apply their beliefs and love. If everyone did this, little by little, we would.. hopefully live in a more loving world.

“Human to be” : Human to be is about being yourself and loving yourself as you are , without caring about what or who is going to give you a hard time for being “different”.

“Happy”: it about staying in a relationship that you are not happy in. Either staying or not letting the person you supposedly love, go. Even if they are unhappy with you.

“Numb Killer”…Numb Killer will be on our next EP. It’s about the attacks in London and at this point, sadly, about any attack that happens in the world.

TGC: “Little Pieces” but it is meant to be a silly, cheesy pop song.

MP: Too Much Thinking

CH: Too Much Thinking

TGC: Hummm… I have never really thought of this.. I was really excited to work with Jason Orme, and that happened!

I mean, hey! If Brody wants to feature on one of our songs, I won’t say no!

CH: try to play with the same feeling as the other during a song

TGC: Well… until now, I would have said, finding the fitting band member. Everyone is different, so you want to make sure that you find someone who fits musically and with their personality.

TGC: Coralie loves musicals and she is addicted to coke! (Coca Cola) and Matt is the sweetest.

TGC: Nothing that I can think of now.. but believe me, we are fun!

TGC: I don’t think there is a formula to writing a song. Music is art, and it is a way of expression. If you start adding “formulas”, and over thinking it, you “kill the art”. It also depends on why you do music…This is what I think and how I write. I am not here to judge or tell you what is right or wrong. You may be into commercial songs, or in the music for other purposes, as of for Tarah Who?, when the inspiration comes, I try to use it as much as I can, I try to keep it as authentic and felt as the first time that it came. I don’t know if it is good or bad, it is just what I do.

TGC: I played in Ho Chi Minh city and it turned out to be a very fun show. I was not supposed to play but when they found out that I was a musician, they “made me” play a couple songs. It was packed and a lot of fun.

CH: I came here from France

TGC: Spending time in the studio with Jason Orme was pretty amazing. Jason and I, have known each other for a few years, but we haven’t worked together until now. Turns out, Jason is an amazing character. I knew that he was talented, and that we would work well together, but I didn’t expect to be working with such a great human being!

Thomas Lang is also pretty cool! He has worked and knows everyone, so it’s always nice to hear his stories.

MP: Pastel Felt. Their music is upbeat and hypnotic. Lots of reverb.

TGC : I have no idea ! I haven’t had the time to check anyone out really. If I am not playing or writing, I prefer silence… So I don’t know what’s new…

MP: Paris!  I hear the bars and clubs get really rowdy with rock acts.

TGC : Ha ! Matt, Yes and no… Bars and clubs can indeed be really cool,and fun venues but it’s not always the case ! Just like everywhere, you need a good following and depending on the bar or venue, you can’t be too loud… ! Which is not ideal for us.. !

I love touring. I could and would tour anywhere. I haven’t played in Japan or Australia yet, I am curious to see how the music scene is, there for us.

MP: Be yourself, love yourself, do your absolute best and most importantly be happy!

CH: Do what you want to do

TGC: Love yourself and love each other. Too much time is wasted on bullshit.

TGC: We have just released an EP called “Half Middle Child Syndrome”. I have two brothers and when I meet people I often hear “Aaah you’re the middle child”. I started looking into it, because I had never heard such a thing before, and I found it pretty funny. I do have two brothers, I have an older brother and a half little brother, but I don’t think I have that syndrome that I have been reading about. We haven’t been raised together with our little brother .. so I don’t think the “symptoms” are that apparent for me;)

TGC : Yes, our next show is on October 28th. After that, we are going to be focusing on our next ep .A tour is planned for April 2018, and more dates in Europe next summer.

MP: Well, we had some great adventures back in the day but there is nothing compared to the invaluable social media that is available these days making promoting so easy.

TGC: I don’t agree for Tarah Who? If you are looking or hoping to get signed. Then YES , I agree. If you are, like us, independent and want to stay this way, then … you are totally fine. This is THE BEST time to be in music. Social media helps you to be out there, in contact with your fans, and make things happen for yourself. It is a lot of work, but you can do it all on your own , and exactly how you want it! Just be creative!

MP: We are thinking of making a portrait of Tarah on black velvet…joking of course. Nothing too out of the ordinary right now but we could find something crazy to sell in the future!

TGC: Ha! Matt! Gosh I hope not! Right now, everything is pretty standard but I do have things happening in the near future. Follow us and you will know about our upcoming unusual merch!

MP: An acoustic version of Rainy Day would sound awesome and I actually think we might be doing something like that soon….

TGC: An acoustic album is in the works, and currently, our live shows differ from the albums. Chech us out live, you’ll see, it’s a lot of fun!

MP: Hey, our fans are everything. It really gets me going to see them bobbing up and down to the music.  I’ve had the pleasure of getting to know a few of them.  Thank you guys(our fans), we love you!!

CH: A lot, we can do music thanks to them

TGC: Fans are the reason why we keep on playing live. We make music thinking of who we are going to appeal to, and who we are going to inspire. When the message is out there and people respond, fans are dancing, singing along, and having a good time, it is the best reward, an artist can get. Do this worldwide, in different countries, different cultures and get the same response from people, you know you are doing something right, and you just want to keep doing it. Fans are the reason for everything.

TGC: I need a lot of massages! Being a musician, touring, writing, promoting, is very physical. Deep tissue massages are the best!

MP: No need. Jameson whiskey cures all on stage injuries.

MP: Tarah because she gave us the wrong set time. Haha.

TGC: Matt: MEAN! You know this won’t happen. We did have a gig a SF, where the booker had forgotten about us! Luckily we still got to play and got extra cash! Coralie is right, The car might be an issue sometimes! Matt’s battery died before a show in Long Beach, Should I mention who’s fault it was Matt?;)

To be fair, Matt and Coralie are ALWAYS on time. Which is kind of unbelievable, but it’s really nice to have band mates that are so dedicated and on the ball! No.. If we are late to a show and Matt is driving… THIS is why!!! 😉

MP: A Jaguar. Fierce yet beautiful.