Super73 take on the A-Z challenge!

Following the release of their latest single Monkey See, Monkey Do, we asked Super73 to take on our A-Z challenge! A song that made you want to make music?  Andy: Roy Orbison – Pretty Woman… that’s a shoot.  When I was about 5/6 I used to put Mr Orbison on in one cassette deck, and […] 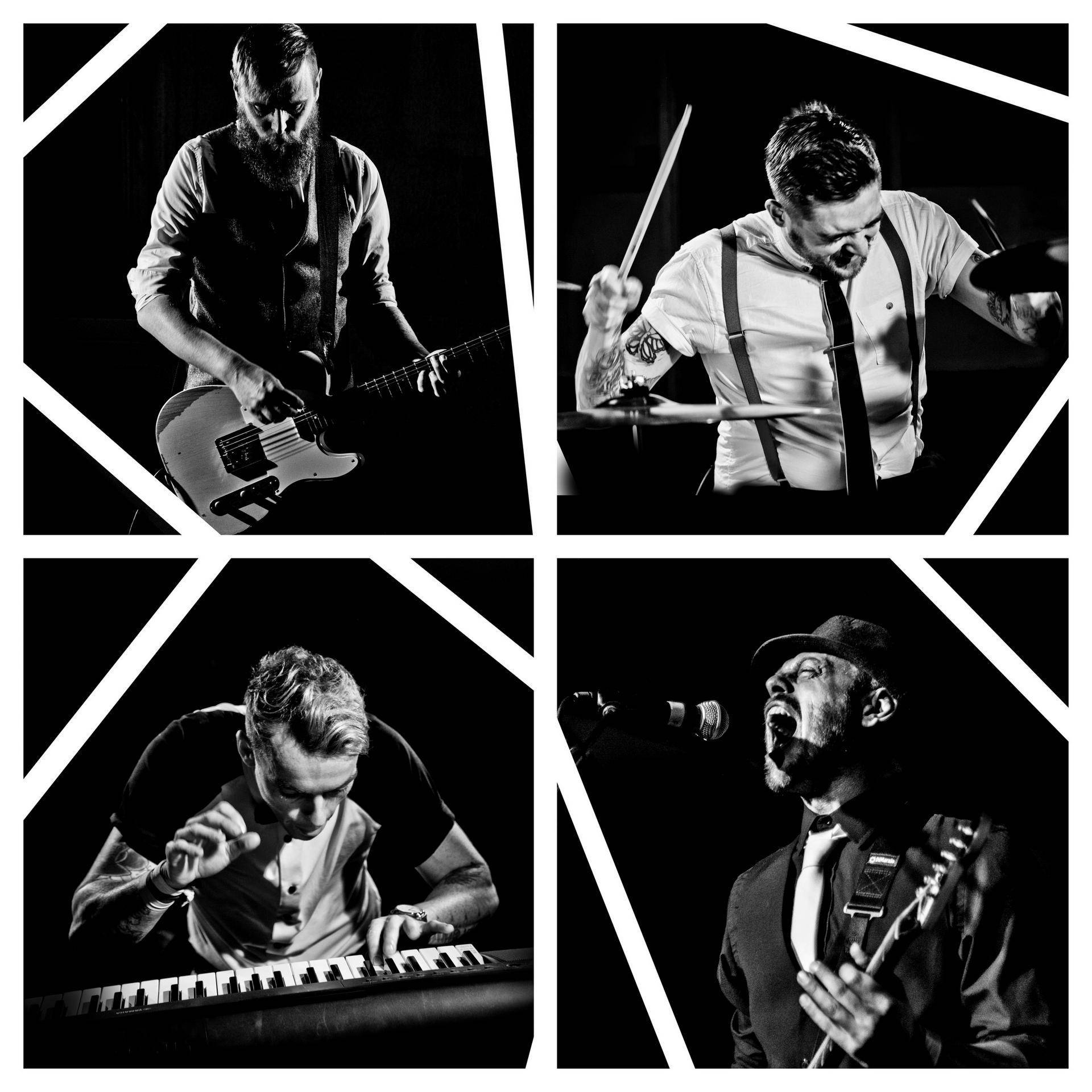 Following the release of their latest single Monkey See, Monkey Do, we asked Super73 to take on our A-Z challenge!

Andy: Roy Orbison – Pretty Woman… that’s a shoot.  When I was about 5/6 I used to put Mr Orbison on in one cassette deck, and a blank tape in the other.  I used to get my miniature guitar and pretend that was me and I used to record my elf to cassette.

Merk: Well, I’ve been wanting to make music forever, ever since I’d dance around in the bedroom with a tennis racket as a guitar to the Outrun soundtrack. Loads of songs made me want to make music, there was a group I saw called Rondo Veneziano, they were a quartet, wore masks. I thought they were awesome in my YOOF. But then, I also though Mr Bungle was awesome too. In fact, my old next door neighbour made me learn music, she’d play “The Monkeys Wedding” on my keyboard but not show me how to do it, so I bloody well learnt. My Old dears weren’t into music when I was growing up, so I don’t know where it came from. DNA probs.

Rob: Pink Floyd – Wish You Were Here. On the flip side of that I also had Chesney Hawkes – The One and Only on cassette, god knows if that had any impact.

Adam: I’ve been writing music since I was really young and honestly the song that got me the most was I Would Do Anything For Love (But I Won’t Do That) by Meatloaf. I can’t explain it think it was the dynamics and the changes in emotion through the track. I dunno but yeah, that one.

Merk: Best Rider? Hmmm Its not until I’ve been asked questions like this that I’ve thought about riders. I personally haven’t had anything exceptional, I think it’s time that changed, so next time I get asked this question we can get into it. So for now. Doughnuts. Sweet Sugary Doughnuts

Adam: if I ever get a rider I always ask for socks. From touring once and a member didn’t bring any the smell was horrific so yeah the best ones are the ones with socks.

Adam: agreed, he’s the guy that can take the most innocent of comments and turn it into the devils words

Merk: Deepest Lyric? Hahha, that’s a bit… y’know, Like…. Oh to hell with it. Deepest Lyric? Well, there’s a few deep lyrics in Monkey See Monkey Do. “Greece had a Word for it, called it Gnosis, Maybe we should all pay a little more attention”

Merk: Easiest? Can I just say at this point that it’s not gone unnoticed that I’ve been answering questions with a question. I’ll stop that, it’s annoying. None of them are easy, some come quicker than others, which is true in more than just song writing….. and we’ll leave that one right there.

Rob: Personally, I think the whole music side of the song writing process is pretty easy for us. We jam a lot and record our rehearsal sessions so if we stumble upon the magic, we have it on tape.

Adam: for me it would be a track called Taboo 10 just wrote itself.

Merk: I love em all, I do. I know that’s cliché, but I don’t care. I hate it when you have to choose one to leave behind. It’s like choosing your favourite child to take to a theme park and leaving another behind to play in the rain.

Rob: for me, Monsters, much love for that song.

Adam: to play probably Commandment 1 to listen to all of them.

Merk: For me, it’s got to be trying to let people know you exist. You try to get yourself out-there, and you get met with “Shameless Self Promotion” well, yes, it is. Shameless self promotion, there’s no shame in it, I fucking love it. 🙂 Why would I not want to tell people about it?

Andy: Rob has an admirable characteristic that he has a comedic leaning towards the most absurd and disgusting shit on the internets… he loves to share his findings… everyday.

Merk: Are these Roses?

Rob: My constant ability to disgust the rest of the band. (see above)

Merk: Do we have in jokes? Do I know them? What’s goin on heeeeere?

Merk: For me, it’s not being too hard headed about what you want it to be, we’re a band, and we’re pretty good with listening to each other and incorporating each other into the sound. We’re also pretty good about trimming. Sometimes, when you get stuck in a thing, it can drag on and on, you know. Like Harry Styles new one, as a song, it’s alright I guess, but it goes oooooooooon. We don’t tend to do that, get done what you need to get done and get gone. Don’t wipe on the curtains.

Andy: I believe that music is an outburst of creativity, it fascinates me how it can come together.  For me, I always say to let the music write itself, feel where the song wants to go and follow it.  If you have to frantically work out the direction of the song with complex calculations, time change sequences and old medieval treasure maps you’re probably going the wrong way.

Adam: be able to take criticism without compromising what you want, don’t force something just cause you like that bit. If it gives you a fizzy willy then it’s gonna be great.

Rob: Distance doesn’t matter, I get a nose bleed as soon as I leave Leicestershire.

Mark: The Furthest we’ve gone so far is to the Big Smoke, we got there, staying at a mates flat, got to the venue, unloaded all the gear, soundchecked, then got a call that we couldn’t stay at the flat cos his flatmate had other people staying. Ahhaha. Led to a mad dash of “Wherethefuckarewegoingtosleeptonightohmygodthegearshittinghellbastardarse”

Nailed it though, Can’t remember where we stayed, but we stayed somewhere and all was well

Rob: As cheesy as it sounds, these 3 fuckers. The ideas that we can generate by bouncing ideas of each other is fantastic.

Merk: That Feels. That chicken skin goose bump feeling when it all comes together.

Adam: quite a few tbh can’t be arsed to say their names.

Rob: I’d love to tour Japan, I think they’d love us over there.

Andy: The US for me.

Merk: Yeah, I’d agree with that, and I’d like to go. Never know, might come back a superhero.

Andy: “Just when they think they have all the answers, I change the questions”.

Merk: The ONLY Constant is Change.

Merk: Wellllllll, it’s a kind of political rant in someways, without being too affiliated with either of the sides. It’s from the point of view of humanity, it’s called Monkey See Monkey Do as the saying refers to the learning of a process without an understanding of why it works, which is how I believe, a great deal of the populace get through life. Things come and go, news gets reported, you take what you take and you do what you’re told. Like Mimicry, with little or no concern for the consequences. The most damaging phrase in language is “It’s Always Been Done That Way”

Andy: We may or may not be announcing something very soon!

Merk: What like, banging on tree stumps blowing into the arses of frogs? Those Old Days? Or like, maybe the Medieval Lute players? I don’t know, it’s subjective, but we humans have a tendency to look at the past with the rose tinted glasses firmly in place. And also I guess, you’re experiencing music for the first time back in the day, you’re making experiences with soundtracks.

Andy: I agree with Merk. It is usually a common thought that the past was better than the present, or infinately better than the future we are about to experience.  In some aspects yes to the question, but in most cases, the best is always yet to be found.

Adam: Andy overbuying S73 mugs, I mean I love a mug but come on!

Andy: Orchestral versions of the whole set, much like Metallica‘s S&M album.

Adam: acoustic. I’d like to play around with a stripped back set see where it all came from.

Andy: Without people who appreciate what we do, there is simply no we.

Rob: Everything really, people who support us and help us reach the ears of new people are the best. We played a gig a while back and this bloke spoke to me after. He was a hardcore Death Metal fan, listens to nothing else, he said that after listening to us he feels like he should give other types of music a chance again. High praise indeed.

Andy: I have a muscular-repetitive strain injury in my back and constantly have issues with my knees, according to the opinion of my chiropractor this is because of drumming. War wounds and damn proud.

Merk: We’re pretty good at this these days, we like to be there so we can get involved before we get involved.

Adam: it ain’t ever me or Rob. Not mentioning names but just saying.

Rob: A pissed off Rhino.

Merk: Monkey and a Frog. Yeah you know don’t you.

Andy: I’m with Merk, those that know… know.