Brad spoke to State Champs as they gear up to release their new album ‘Around The World And Back’. Speaking to the Pop Punk heavyweights about the upcoming album, supporting 5 Seconds Of Summer and wearing Crocs! 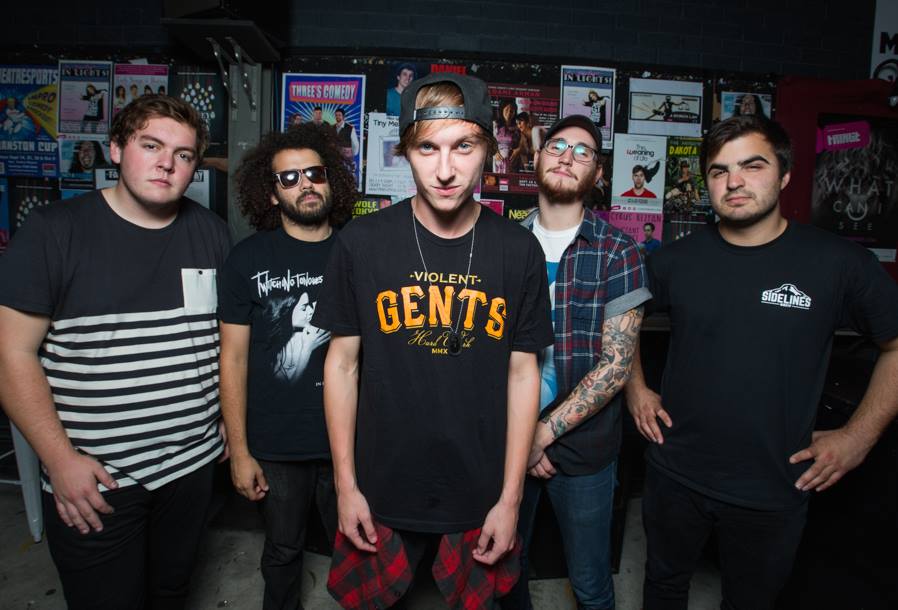 Brad spoke to State Champs as they gear up to release their new album ‘Around The World And Back’. Speaking to the Pop Punk heavyweights about the upcoming album, supporting 5 Seconds Of Summer and wearing Crocs!

Hello State Champs! Now you have been relatively quiet recently on the releases front seeing as you are gearing up for the launch of the new album, how excited are you to get it out there?

We’re very excited! It’s been almost two years since our last LP release. We can’t wait to for everyone to hear what we’ve been working on.

What differences and similarities are there with ‘Around The World And Back’ compared to 2013’s ‘The Finer Things’?

I’ve been describing ATWAB as “The Finer Things on steroids.” Basically, ATWAB is the next logical musical step for the band. We have progressed as songwriters since the last record but it isn’t too much different than TFT. I rather let the record do the talking!

You supported 5 Seconds Of Summer in Australia, how was this compared to your normal shows and do you think they are doing good things for the Pop-Punk scene?

It was very different for us. We did some headlining side shows while we were out there so we went from playing 400 capacity clubs to 10,000+ capacity arenas. It’s a whole other ball game. It was fun to experience that side of things, though. We’d love to do it again. I think 5SOS is absolutely doing things for the pop punk scene. Say what you will but they’re getting songs on the radio with real instruments in them. Their live show is all real, they’re very talented guys. They put on a really good show, it’s awesome. In my opinion, they’re making rock “cool” again, and thats a good thing for all of us.

Last year, you released an acoustic EP which was truly something special, have you always wanted to do some acoustic tracks? and can we expect more in the future?

Yeah, we’ve always liked acoustic stuff. Whenever bands we listen to put out acoustic records, we love it so we decided to follow in their footsteps and do one of our own. We did it over the course of one week so it wasn’t too challenging but it was fun to strip down the songs and turn them into acoustic versions. A lot of the guitar stuff is in cool open tunings and it was a nice break from the normal half step down power chord stuff! We also write all of our songs on acoustics to begin with. They all start as an idea, a riff, a melody, whatever, and we just jam on acoustics then put it together for real. You can definitely expect more acoustic stuff from us in the future, yes.

You are definitely one of the Pop Punk heavyweights right now, do you relish that title or do you find it daunting?

I don’t find it daunting at all. We just like to play songs and connect with fans through music. We got here by writing stuff that made us feel better, and thats cool that it can make someone else feel better. That’s not gonna change no matter our “title.”

Being a band who has toured in a whole host of places, what was your favourite venue and why?

I have a lot, but I loved playing the Palladium in Los Angeles. It’s in such a cool area you can leave the venue and walk around and do and see all types of stuff. I like venues that offer more than a parking lot, you know? It’s the same thing with The Forum in London! It’s right next to the tube and you can hop on a train and go to piccadilly or what have you and that’s awesome.

We work with a lot of upcoming artists and as I am sure you know, it can be tough for bands starting out so what advice would you give them from your experiences?

Are you excited for the UK tour?

Very much so! We haven’t been there since November 2014 so we’re definitely ready to be back. We’ve missed Nando’s.

Now, we always end our interviews with a bit of a sillyness… so we have three quickfire questions for you now;
Who is the worst dressed in State Champs?

Ryan but only because he wears Crocs. He looks great up top until you get to his feet and then you’re like “what are thoooose!!”

Kanye for President…Yay or Nay?

I mean, he’d probably be better than Trump, right?

Name a song you love but you really shouldn’t?

If you had to cover a current cheesy pop song what would it be and why?

It’s not cheesy but I think Want To Want Me by Jason DeRulo was the best song put out this summer, so that one!