Skywalker take on the A-Z challenge!

Skywalker are set to release their new EP Sugar House on September 1. The band, who are based between Liverpool and Prague, have created a sound that amalgamates a bit of A Day To Remember, Rise Against and The Story So Far to create their own skate punk with hardcore elements. They’ve also toured the […] 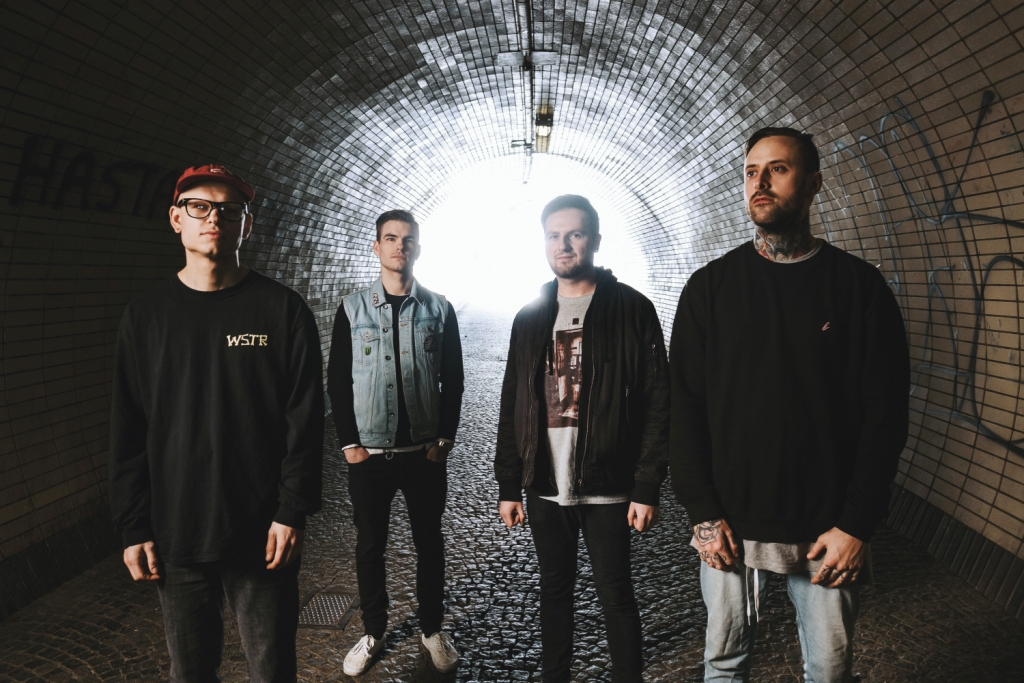 Skywalker are set to release their new EP Sugar House on September 1. The band, who are based between Liverpool and Prague, have created a sound that amalgamates a bit of A Day To Remember, Rise Against and The Story So Far to create their own skate punk with hardcore elements. They’ve also toured the world and played with the likes of NOFX, Limp Bizkit and Madball! Ahead of the EP release, we asked frontman Jay Kutcher to give us a little bit more info on the band by taking our A-Z challenge…

I’m sure it was at a Jugend Zentrum somewhere in Germany. Nothing gets close to the service and hospitality of those places. We always appreciate any vegan catering so if we happen to get a variety of that, we’re thrilled.

Being schooled like kids on how to behave in a shared backstage by Lars Frederiksen of Rancid!

Our new stuff is pretty personal and I went really deep with some of the songs, especially Sugar and Caffeine. But it was in the song Theresa on our debut record Liberty Island that I stepped out of the typical pattern of hardcore/punk rock lyricism and wrote something much more metaphorical. Being a long-time student of literature, I was excited to have the opportunity to express my emotions with the help of figurative speech rather than the most obvious phrases we all grow tired of.

Island. It’s an older song we have and it’s a mere appreciation of music and all it brings into my life. When I say mere, I don’t mean to underestimate the beauty and importance of it. It’s just simpler and jollier to write about such stuff.

For me it’s probably our 2015 song Grim Fandango. It’s a very personal song I wrote as a sort of apology and coming to terms with the loss of someone very important in my life. I tend to get rather emotional every time we play this, and that’s OK, it’s music. Playing the new song Caffeine feels great as well.

The more time and effort we dedicate to the band, the less time we have to actually go to work and make enough money to support the band. So this creates a paradoxical situation almost no other band in our region understands: the more successful you get, the harder it gets to sustain that. Also, especially in the past, I became so obsessed with the band that I let it destroy some of the most important relationships. Hopefully, that is no longer the case.

Damian (our drummer) is a major producer/studio engineer in the alternative/heavy music scene in the Czech Republic/Slovakia region. Pretty much any pop punk/metal/hardcore band worth a mention has worked with him.

I’m pretty sure this cannot be published! Let’s just say a lot of them has to do with male nudity.

We’ve actually been trying to figure this out. We’ve done both lyrics-to-music and music-to-lyrics writing. Both works and both doesn’t in a way. I suppose the greatest mistake of heavy bands is an obsession with riffs. When guitarists write, they tend to end up with an illogical succession of riffs, some of which are dope, but it rarely works as a song. I think vocal progressions need to be taken into account at the very beginning of the process so that one ends up with a tune rather that a bunch of riffs. That is what separates cool metalcore songs from timeless works of the Beatles or Oasis. And don’t get me wrong, I love metalcore.

Depends. We’ve obviously been to China, Japan, Canada and such so that’s pretty far. Especially in China, we’d travel about 1-2k km’s everyday but on a super-fast train so it doesn’t count. The craziest drives would be from Newcastle in the north of England to Liberec, Czech Republic, or perhaps Hamburg, Germany straight to London and back to Prague, Czech Republic in a little more than a day.

It will have to be Tom DeLonge again. I fully realise he may not be the best guitarist live or the best singer but his deep understanding of the patterns of punk rock and his undying will to experiment and always update his own work and various sources of inspiration is astounding. Also, his voice is absolutely unique.

Lifetight from Birmingham. They’re just fun to listen to.

Neck Deep, While She Sleeps, Blood Youth, A Day to Remember.

Even if you mean these words, my integrity comes first. So let me seek my own salvation. (From our upcoming song Blood)

I wouldn’t know. I don’t know how the kids who are 13 today feel about music, I mean I only have a very rough idea. I’d hope for them to have as much fun and as authentic experiences as we did when Hybrid Theory came out. I certainly think that the art of song writing was much more honest. In that sense, I’d agree. But I’d feel like too much of a grandpa if I simply said the good ol’ days were much better.

We’re doing some pink hoodies and generally using a lot of pink. I’m excited because as much as I realise it’s a thing these days, I’ve loved this since the days of Mark Hoppus’ pink bass guitar!

Yeah, we’re definitely doing an acoustic EP. It’s not just going to be about doing the songs acoustically but experimenting with new ideas, potentially different chord progressions and stuff. I want to hear if the songs are indeed solid tunes that can stand out as poppy and soft.

I don’t think we think of the kids at our shows as fans. We’re all partners in crime, so to speak. They mean everything. Obviously, we’d still write songs even if no one wanted to listen but the appreciation is a crazy thing. So yeah, we’re extremely grateful to all of them. Literally all of them.

I have some scars I got when hit by guitars and bass guitars but it was never too serious, thank God. So it only helped the overall black metal feeling of the show, haha.

We’re always late for shows and it’s our joint effort not to come on time haha! But mainly it would be me, I believe. I function at a very slow pace.

Fuck zoos man, big time! So hopefully it would be the one that is liberated and completely disregards the bars of its cage. Perhaps a bird of some sort? I like to think of our band as something that grew in the hardcore/punk rock scene but will progress God knows where. The bars would be the various genre specifications and the zoo staff would be the “true till death” hardcore kids telling us we’re fakes and sellouts. So we’re the animal who’s chosen its own path to freedom.