SHADED take on the A-Z challenge

SHADED are gearing up for a recently announced tour with Common Ground Records labelmates Wolf Culture. We wanted to know more about the trio so frontman Matt East complied by taking on our A-Z challenge! A song that made you want to make music? S.O.S by Jonas Brothers. Straight banger. Best rider you’ve had? Our very […] 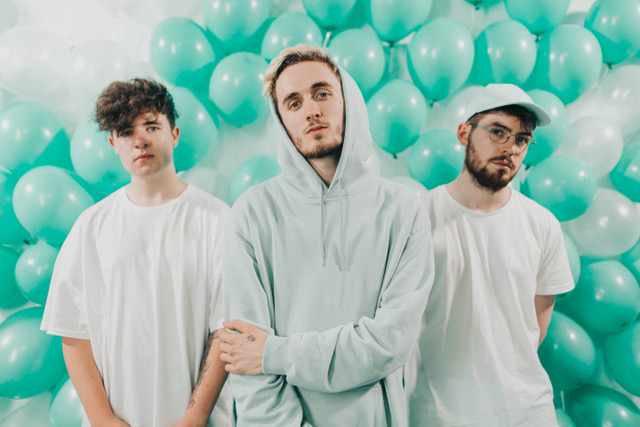 SHADED are gearing up for a recently announced tour with Common Ground Records labelmates Wolf Culture. We wanted to know more about the trio so frontman Matt East complied by taking on our A-Z challenge!

Our very small rider has only ever actually been fulfilled once haha! It’s not very exciting at all – some tea bags and water.

(un)Luckily, we’re still yet to experience anything OUTRAGEOUS, but we’ve met a lot of very interesting characters doing a lot of interesting things outside venues in London.

The lyric that I associate the most with right now would have to be the bridge from ‘Tell Me’ – ‘Just fall into memory, start drifting away.

Make me more than a memory, cus you’re slipping away.’

‘Too Far Distant’ from our first EP came very easily. When that song came about, I was really enjoying writing slower ballad-style songs and lyrics. Certain things were happening at the time, which made the lyrics flow a lot easier.

‘Tell Me‘ is definitely our favourite night now. Maybe because it’s only recently been added to the set after being released, but it’s always the one we look forward to playing most!

Personally, I’d love to write and record a song with nothing,nowhere. What he’s doing right now is so fresh and original, and a lot of his work actually inspired the alternate version of Tell Me haha!

It’s got to be missing family holidays, birthdays and other events. But it’s what we signed up for, and we wouldn’t have it any other way.

Dan is secretly a member of the Southampton FC Hooligans Club… I will neither confirm nor deny the truth behind this.

I wish I could explain them but they are so rogue and far too much of ‘inside jokes’ for anyone else to find them even remotely funny.

I find that my best lyrics come from sincerity. A long while ago, I used to find it sort of cringy when i’d try and open up in a song, but now having been through the things I have and experienced certain things, I find that it’s such an amazing way of venting any kind of frustration, anger or hurt that I’m feeling. So yeah, long story short, the key to writing a SHADED song is sincerity.

We drove from London to Norwich for a one-off show in a Tequila bar. I know it’s not the longest drive in terms of distance, but the drive is HORRENDOUS. Took us about 6 and a half hours each way, cramped up in cars. A great experience all round.

Watching Stevie Wonder live when he was much younger.

Layover are doing great things right now. We recently finished up a tour with them and they’re some of the nicest and most talented guys we’ve played with. Check them out for sure!

It would be really cool to open a 5SOS show.

‘It’s all gone to cock’… there will be context for that at some point.

Reason for the title of your recent/forthcoming record?

The single ‘Tell Me‘ is a track about a lack of communication, which I think is fairly self explanatory from the title.

Burn It Down Fest! 1st September. It’s gonna be a good one.

I disagree. Music has only improved sonically and lyrically over the years.

Fortunately, our merch is all fairly standard haha.

We’ve actually done an alternate version of ‘Tell Me’. Go check it out!

Anyone that invests their time in any shape or form means the absolute world to us. We wouldn’t be where we are or be doing what we’re doing if people didn’t give us the time of day so we’re very grateful!

None yet! *touch wood*

Dan. He has a gear check-list that he must check over about 15 times every time we load in/out. I love him with all my heart but he could do with a faster engine.

English Bulldog. We are pretty relaxed and calm for most of the day… but give us a 30 minute run-around, which in our case is our live show, and we lose our shit.