SEASONS take on the A-Z challenge!

Bedfordshire alt-rockers SEASONS are a hit with everyone who have seen them live thanks to their catchy tracks and sheer energy (they’re also really nice guys too!) We asked guitarist/vocalist Steve Watts to take on our A-Z challenge! A song that made you want to make music? I’m gonna be smart here, and say The […] 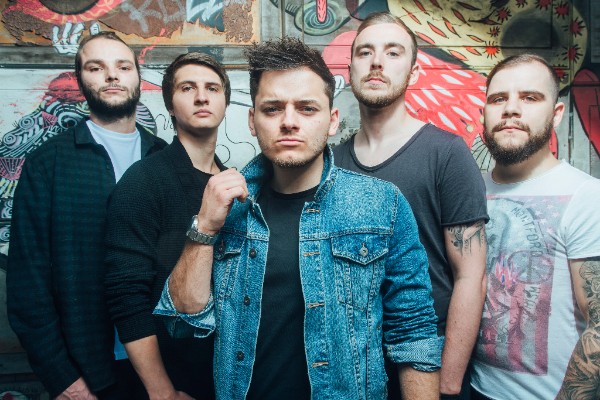 Bedfordshire alt-rockers SEASONS are a hit with everyone who have seen them live thanks to their catchy tracks and sheer energy (they’re also really nice guys too!) We asked guitarist/vocalist Steve Watts to take on our A-Z challenge!

I’m gonna be smart here, and say The Runaway by SEASONS…hear me out…this was the first track I heard before I auditioned and joined up with Grant, Matt and Brad, and it was this song that convinced me this project was going somewhere.

At a show once we got 5 multi-packs of Walkers crisps and 4 cans of Fosters! That was pretty sick.

On our second tour we went for breakfast at a Harvester, finished our meal and headed out to the van. Matt had left his jacket inside and it was raining so he ran back in to get it. Meanwhile we ran to the van and started to drive away without Matt, with the side door open so we could all yell abuse at him as we zoomed off without him. I don’t really know what we expected to happen but Matt burst through the doors of the Harvester and began tearing his way towards the van. We must have been doing between 15 and 20mph, and I have no idea how he caught us but he did, not only that but he managed to get alongside the van and dive through the open side door into the back seats. Unbelievable show of pace, the likes of which I don’t think we will see again.

Probably the most current and relevant lyric for the world we live in these days comes from Empire. The song itself is about politics, Governments, and their struggle for power and control. The lyric is “So confused that we are numb and our heart’s about to burst...”. I just feel it sums up how the majority of the public are feeling these days about a lot of political subjects. Nobody knows what will happen but we all have our own views we will defend to the end.

Seven Years. Hands down easiest. I think we wrote 90% of that song in about 2 hours.

That’s gotta be Empire for me. The energy that song creates is electrifying. That big riff and the vocal harmonies. It’s all so fun to play!

I would say Oli Sykes but someone else has beat us to that! I’d probably go with Jared Leto. What a voice that man has.

Reaching a definite decision. Just on anything. I think in the last 16 months, we have only made one decision collectively, as a band, which everyone has agreed with!

As a young lad, Brad broke his arm quite badly, and now it doesn’t sit straight. I believe that’s why it looks like he’s always fighting with his bass when we play live.

One time, at band camp…no but seriously, one time Antony mentioned that it would be a nightmare to park outside a venue for a show. Just one time. But now, every show, there’s always a message in the group chat from one of us saying it’s “a nightmare to park!”. I feel a bit sorry for Ant really.

Team work. It’s so important that everyone has their say and is completely happy with how a song is sounding. It’s about trusting each other’s judgement and working towards what you all feel is as close to the best you can produce.

So far, the longest distance is up to Newcastle. We’ve also been over to Cardiff which isn’t far behind.

We supported a band called RavenEye not long ago at a small club show in Milton Keynes. There was maybe 100 people at the show.  As I understand it, this wasn’t an overly busy show for them, but it was run of the mill. Turns out 4 months later these guys have been selected to support KISS on their European arena tour. Anything can happen.

Give Veridian a spin. Excellent song writing and getting all the right exposure at the minute!

IDEALLY we’d open up for our boy Ben Sansom (Lower Than Atlantis) and his gang. That would be nice eh?!

America would be insane. I think our style of music lends itself to the American market as well. Yeah, I said it! WE’D BREAK AMERICA EASY!

Congratulations for making it to Q, add us on facebook, send us a message that you made it to Q and we’ll get you in free at our next show, how’s that?!

Our recent EP, What Goes Around is named after a lyric from Empire, the debut single of that release. The full lyric is “What goes around will come back around”, it’s a well known saying and it’s another nod towards the political issues facing us currently. The good thing about this lyric though, is that it can apply to any scenario.  So it will speak to everybody in a different way.

Our next shows are on March 14th supporting Club Drive at The Garage, London, and March 25th topping the bill at The Jungle Bar in Hertford.

I think we have lived through some incredible changes to society and technology. These changes no doubt played their part in defining the music industry as it is today. For those reasons I believe the music that is being created nowadays has become a lot more diverse. By that I mean anybody can make music in their bedrooms so there is a lot more music of quality available to buy or stream etc. Whatever you like to listen to, you can now hear it anywhere in the world at any time. I’d have to say that for a musician, this is an exciting prospect. So to be involved in the music industry these days holds many more possibilities.

So far we’ve been pretty generic with our merch selection, just to get bedded in. But we have plans to do things like phone cases and snap back hats.

I’d love to do a Latin American version of Seven Years. Don’t ask me why.

Quite simply, they mean we can continue to exist.

You know what, as clumsy as we are, especially Matt, and as much as we dance around on stage, there haven’t been any incidents so far! We’ve had the odd whack in the head or back with a guitar headstock, but other than that we don’t beat each other up too much.

Matt’s!! He’s always losing stuff! He lost the footpedal for his amp on our first tour! We had to find a local seller in Manchester to bring one to the venue for us. He stayed to watch which was nice.

Oh wow. Errrrm…a wolf. Great endurance, energetic when it matters, and loyal to the end.