My name is Mike and I am a workaholic. I started this alternative-rock band in 2004 called Rosedale, and I’m still all about it. I usually put together a team of musicians and travel around north America playing shows and inspiring kids young and old. Sometimes, when I can’t assemble a team, I’ll do it […] 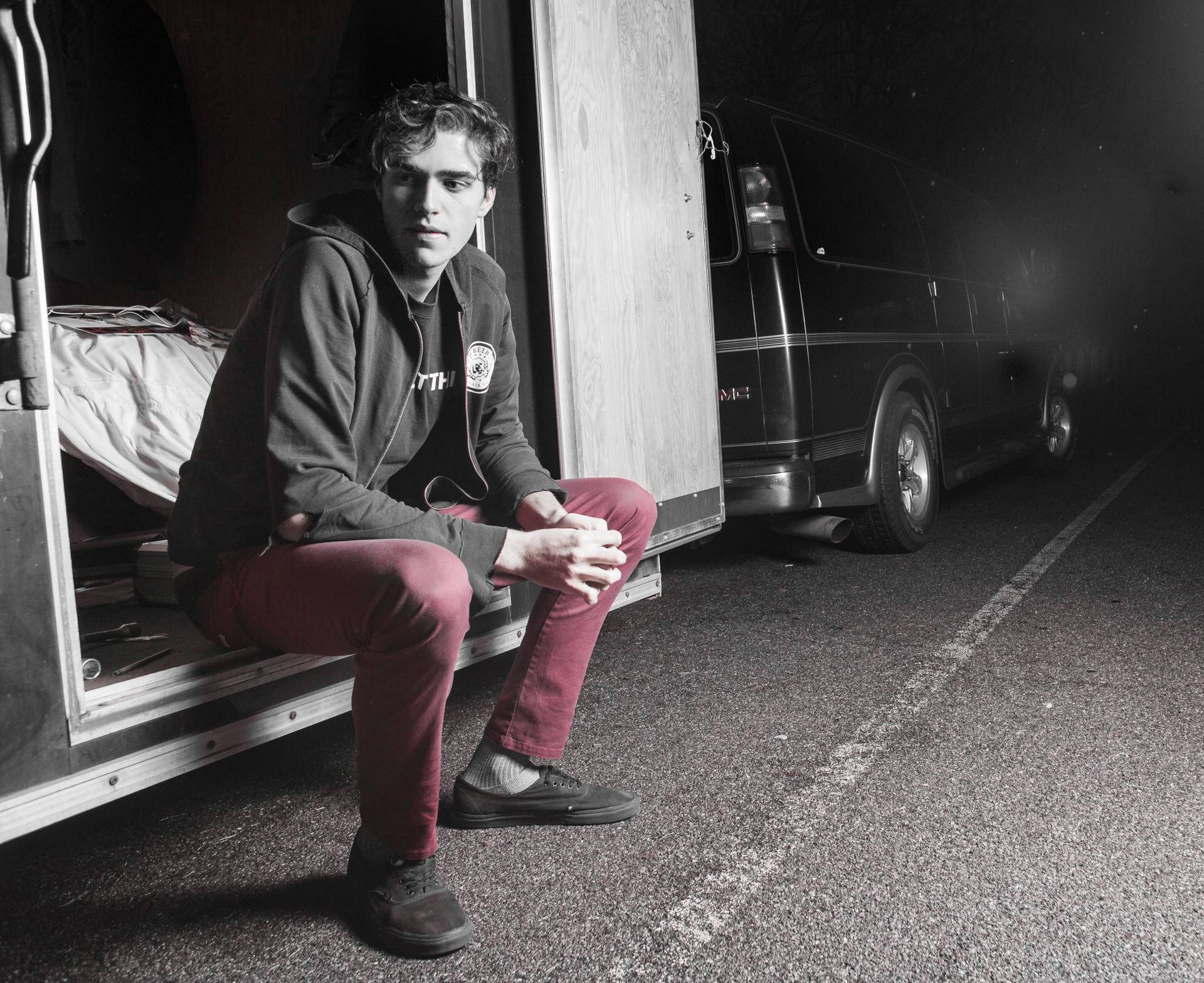 My name is Mike and I am a workaholic. I started this alternative-rock band in 2004 called Rosedale, and I’m still all about it. I usually put together a team of musicians and travel around north America playing shows and inspiring kids young and old. Sometimes, when I can’t assemble a team, I’ll do it myself! I love what I do and I’m proud to say that I’m finally able to make it my living.

Music has always been a part of my life. I can still remember getting my first cassette tapes when I was four years old and jumping on beds learning how to sing along and perform to them when nobody was around. My family was very surprised the odd times I’d come out of my shell and sing along to the Weird Al tape word for word in the car. I always wanted to learn to play guitar, but my mom forced me and my brother to learn piano first, to gain a better understanding of music. And I’m glad she did.

Sports were also a huge part of my life. Weekends and after school were busy with hockey, basketball, golf, and skateboarding- or snowboarding. At 12 years old I got my first guitar and I was hooked. I started listening to punk-rock records like Dooky, Enema of the State, Pennybridge Pioneers, All Killer No Filler, as well rock compilations like Big Shiny Tunes and anything on the Tony Hawk Pro Skater video games.

Pretty soon I was writing my own songs and I’d convince my friends to get guitars and drums so we could start a band.We’d carry our crappy amps to each others houses or walk down Rosedale ave to the local music store and practice what we wrote on pricey equipment we couldn’t afford.

Two EPs later, everyone else in the band grew up and moved on. It seemed obscured to me. I still had this dream! And it grew stronger every day. I wanted to get Rosedale on Warped Tour and turn some heads!

In 2012 I released Rosedale’s debute album, Real, by myself, and set out on the vans warped tour..all by myself. I’d drive all night, set up facing the lineup, play to the early crowd in the morning, then set up my light show and play to the departing crowd at night. After a couple weeks I was invited to play inside on stage!! This dream was finally coming to life!

Since that summer I’ve been touring all corners of the US and some of Canada while releasing some new online content and continuing to develop my sound and show.

The most rewarding thing about this independent lifestyle is not so much the freedom to do what I want and all the fun of traveling around this beautiful continent… Its the inspiration Rosedale gives to others- The ultimate DIY message: Commit, sacrifice, create, and above all…Sustain. You really can do anything if you truly love it and nobody can represent you better than yourself. That really speaks to me.

The Boys of Summer cover by The Ataris

I’ve never had a real rider. On tour with I Set My Friend on Fire in Europe we got catering and there was some cool European groceries. In Italy the literally sit you down for a big four course Italian family meal.

Going into the hospital in Long Island with a burst appendix. I didn’t even know what an appendix was but apparently mine had been burst for 10-12 days. Meaning I had played 8 shows with a burst appendix. I thought I just had a bad stomachache and I wanted to tough it out because I had a great drummer and bassist meeting up with me mid tour. After our first show together I was in so much pain I didn’t sleep. I stayed up all night researching what could be wrong with my stomach and went to the 24 hour pharmacy to get /medication. The next morning I drove to a clinic and they told me to rush into the hospital because I had a ruptured appendix. So I parked my big van and trailer in the loading dock of this little hospital in Long Island and went into the ER. When they told me I’d be going under the knife and missing the rest of my tour that I had worked so hard on, I lost it. That hurt more than the stomach pain. I just wanted to tough it out and take care of it after the tour but they said I probably wouldn’t live another few hours. My Dad flew in, the other band grabbed their gear, and I was an infant again for 3 weeks watching the rest of the tour go on as planned from my laptop.

“He makes the best of it, tells me how I’ll be in his shoes one day, looking after him. Dad you can count on it, I owe you much more than the love you have fore me, I’ll never quit.” That’s from a song I wrote about my dad called “To My Father”.
That part always hits the feels for me because it’s referencing when my Dad would do everything he could to make his dad happy and well taken care of when his dad had a stroke years ago. He was sick for years and many times the doctors would give up on him and say “there’s no option but death”, but my dad would never let that happen. He’d always tell us the stories of how much he’d fight with the doctors to keep him alive and how he’d want us to the same for him when he’s old and sick. So that line is an epic promise.

The first song I wrote is called “I’m Just Me”. It was a total Blink/Sum 41 skate-punk song that we always played way too fast. The opening lead guitar riff makes an apearance at the end of the song “My First Show” which is track 4 on the new Self Titled Rosedale album.

My personal favorite to play live is Grey. It’s so fun and natural for me to get in the zone for that song and go all out.

Tom Delonge. That song would blow up instantly.

Doubt. It brings bands so much turmoil and does no good. But it’s so common.

It’s just me. I’m six foot nine but that’s obvious and not very interesting. I sing for the character Atticus Mitchell on the Disney movie Radio Rebel.

Permission. Give yourself permission to write anything about everything. Don’t think about what your audience may rather hear. The stuff you least want to write about is your best stuff.

The furthest I’ve ever played from home was Budapest, Hungary. The longest I’ve driven straight for one show was Alamosa, CO to Encinitas, CA. My van was getting repaired in Alamosa for a few days so I had to miss my AZ dates and drive straight overnight to Encinitas to make the show and continue the tour.

Travis Barker. Every time I see him play drums I just want to stop everything I’m doing and practice.

Briar McKay out of Springfield, MO

Quicksand is the latest single. I called it that because it’s about the inner battle as an artist/business. It’s common to be surrounded by doubt and struggle and in the chorus I relate it to being stuck in quicksand. Anytime I’d see a show or movie with quicksand I’d think to myself ‘I wonder what that would be like to get stuck in and if you could beat it by crawling/swimming your way out…’ and sometimes I feel like I’m stuck in it, metaphorically.

We had belt buckles for a while but they stopped being cool so I never bothered to order more. Right now we have hats and the beach hoodies do well. https://rosedale.bandcamp.com/merch

I’d like to do an all piano version of Sustain. I started working on it and I’ll probably finish it after this tour.

My fans are my family. They’re like my kids, parents, and siblings. We fight, we make up. We rely on each other, we bail on each other. They take care of me and I take care of them. I love them and I know who the real ones are who actually enjoy my music and come out to shows. They mean the world to me because Rosedale is all I do and they’re all awesome in their own way.

I’ve gotten a lot of X-rays. My toes are all messed up from hockey and skateboarding, my back is warped from playing guitar- so I have some crazy looking X-rays of those. About a year after healing from the appendix surgery, I noticed a hernia from the incision. We were testing out the idea for the Grey video (where I get lit up by paintball guns while singing) and shot my back a few times to test the leave color/slow motion/ and general pain experience. When I went in for the hernia consultation they were like “What happened to your back!?” Then we shot the actual video and I was covered in scabs. I went in to the hospital again for the surgery a couple weeks later and they were really weird-ed out by all the scars. They must have thought maybe it was some sort of fetish.

My van’s. But that’s a rare occasion. I’m usually the first one at the venue. …I just realized all the questions were in alphabetical order. All 26. Just now.

A Lion. I could just see a Lion playing these songs. Maybe because of the Lion King was such a sweet production.

ROSEDALE can be found here: