Novacrow deliver a sleazy heavy sound, with their wide range of influences keeping their music eclectic and exciting. Onstage, they aim to be as entertaining as possible. Ruby Wilkin caught up with the band, and you can read her chat here… 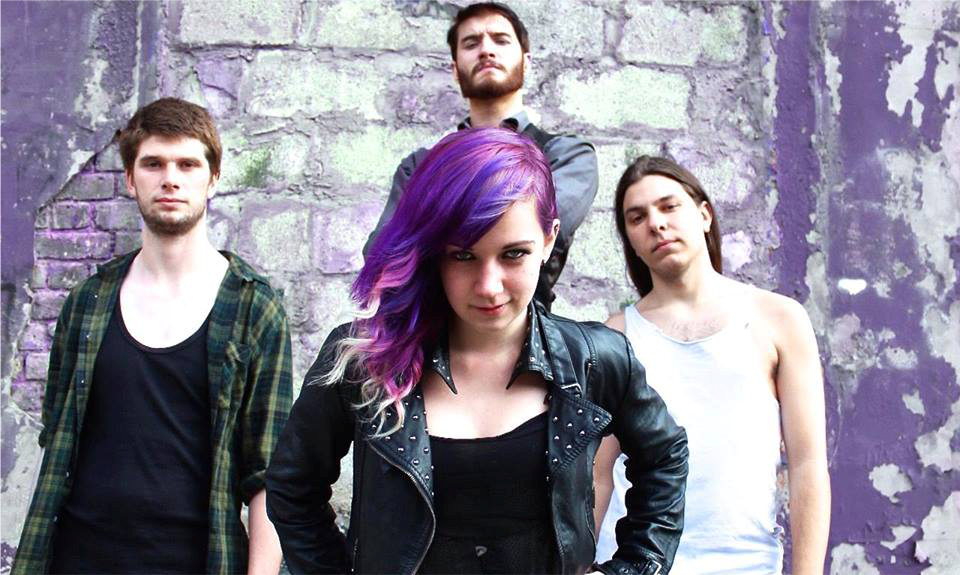 Based in Liverpool and forming late 2013, NOVACROW were drawn together by a mutual thirst to make complete idiots of themselves at any given opportunity. The band consists of, Kitty Staunton on lead vocals and guitar, Federico “The Thumb” Spera on bass/backing vocals, Jonyx on guitars/backing vocals and Torben Schmidt-Hansen on the drums.

Novacrow deliver a sleazy heavy sound, with their wide range of influences keeping their music eclectic and exciting. Onstage, they aim to be as entertaining as possible.

Ruby Wilkin caught up with the band, and you can read her chat here:

How did you guys get together, who came up with the name and why?

Jonyx: Kitty and I formed the band as part of an earlier project and I came up with the name, from combining words with cool animals at random. We guess we just got lucky! If I had to give a fake definition for the word ‘Novacrow’ it would be; ‘the intense sexual pleasure that you feel just before climax.’

As a band, who are the bands that you look up to most? If you could only pick one band to say they influenced you most, who would it be?

Federico: That’s a tough one to answer because we all have quite diverse individual influences. Definitely bands that that don’t take themselves too seriously, but deliver fantastic music and great live shows, such as Red Hot Chili Peppers, Gwar and Green Jellÿ.

There are also plenty of excellent local bands that make us all collectively go “Damn!!!!” and sharing the stage with them gives us a super motivation boost! However, if I’d had to pick a single musical inspiration, I’d have to say ‘Ur Boy Bangz’.

Craziest thing you have experienced while being in the band?

Kitty: We once played a biker club in the middle of nowhere, got beyond drunk and camped out in the middle of November, with no warm clothes. We all shared an inflatable bed and Torben kicked everyone.

Torben: We even slept under a duvet lent by the drummer from Showaddywaddy.

Also, when we were filming our music video for Fight The Horde!!!, pretty much everyone involved got injured by rusty spikes and bits of metal from the big warehouse we rented out. John ripped the skin off his knee and I had a giant gash in my arm. I’m glad my tetanus jabs are up to date! It was worth it though, the video was so much fun to film and I love the finished product.

When writing music, do you keep it personal to yourselves or make music for your fans to relate to?

Kitty: It’s not even a conscious decision. I write what I want to hear and what I enjoy to play. I love the freedom of Novacrow, as we are not trying to fit any particular genre, or trying to ‘sound like’ anything. I’ve never been a fan of music that is pretentious for the sake of it. I think this is one of the reasons that people enjoy the music, because we are accessible and our varied approach to music means we can suit a variety of tastes.

I do always write with the idea of a live performance in mind when I’m putting a song together. I want something that works well on stage and so I like to add big hooks and contrasts. For the majority of the existing Novacrow songs, it’s all very tongue-in-cheek and that gets across the sort of fun vibe we ultimately want.

What are your favourite lyrics you have ever written?

Kitty: I love the lyrics to one of our new tracks, Criminal Mastermind. It narrates a badly executed bank-robbery, from the perspective of the self-centred and idiotic ring-leader. The lyrics are so wonderfully stupid. I was envisioning a bunch of pathetic mobsters, or a rip off of the gang from It’s Always Sunny in Philadelphia.

But, if I had to pick my favourite lyrics, it would be those for The Mantra, which was released alongside our single Fight The Horde!!! Writing The Mantra was like an exorcism. The lyrics came together incredibly quickly. It was painful to write, but it’s ultimately a positive song. The basic sentiment is that even when you agonise over something internally, eventually you will be strong enough to overcome it.

What does it mean to you when people come to see your shows?

Kitty: It is the best feeling in the world! We’re so lucky to have so many wonderful people supporting us. There is nothing more exciting than seeing people singing along to our songs and drunkenly dancing around with us.

What is the best show that you have ever played?

Torben: I really enjoyed my first gig with Novacrow, supporting Tigerpunch at the (now tragically closed) Lomax. It was a great party atmosphere and inflatable animals were flying about all over the place.

Jonyx: We’ve played loads of great gigs. Some of my favourites have been when we supported Skarlett Riot & The Raven Age, and our Wolverhampton show with Green Jellÿ. We also played a huge live-streamed show in Liverpool, where we had zombies come onstage rampaging around and chasing the audience. That was awesome. I’m really looking forward to our EP launch on 12th of March in Liverpool, as we’ll not only be bringing our zombies back, but we’re going to be doing zombie face-painting for the crowd. There’s going to be bands, burlesque and the show is going to be filmed as part of an upcoming music video. More info and tickets at: www.novacrowofficial.com/ep