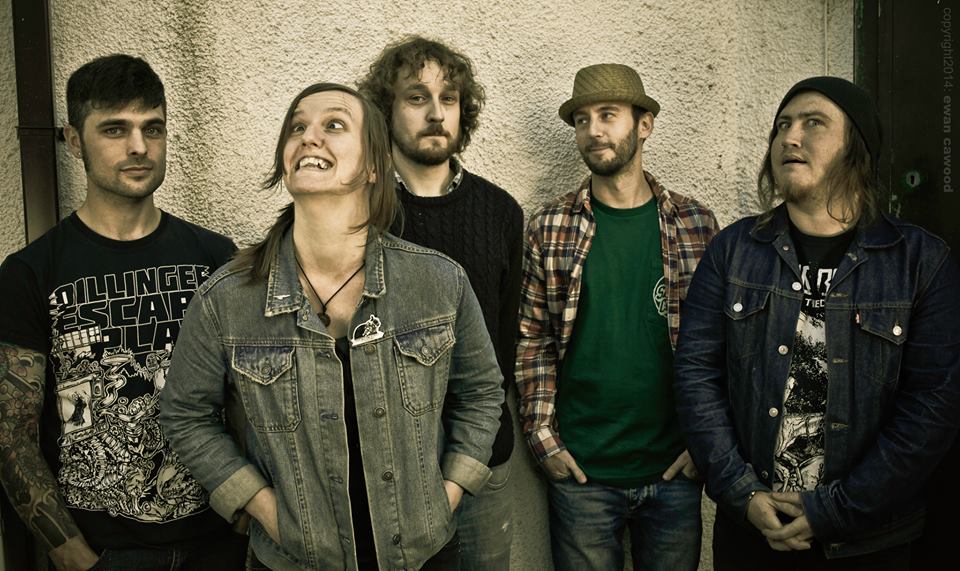 Mr Shiraz are a Groove Punk Rock band from the English Town know as Huddersfield (Sex Pistols played their final UK show there, Patrick Stewart is a big fan, we still have a Wimpy). Although people may know the name of the band, the contents are actually very different. This is what you call a new, improved recipe.

When longtime drummer Rob had to step down from the band due to illness as well as the loss of a guitarist, Mr Shiraz decided that instead of marching on the same that instead it was time to press the reset button and start a fresh with their new members. All old songs were dropped and the band retired to their rehearsal room. A few months later the band returned with a whole new sound, dynamic and hunger and quickly took it back out on the road.

The initial response has been nothing short of staggering, the first new material the band put out (the single No Prophecy) was a 97 second call to arms that quickly turned heads gaining radio play, magazine attention and resulted in Mr Shiraz winning best single for the track at the Pure Rawk Awards. From there the band released EP ‘God Hates Mr Shiraz’ which saw them go out on the road as support to bands including Snuff, Bam Margeras Fuckface Unstoppable, Teenage Bottlerocket, Baby Godzilla/Heck, Snot and more.

We recently caught up with the band and made them take on the A-Z challenge:

A song which made you want to make music:

Personally it was as a kid. I went to a car boot sale with my Mum and bought a double tape entitled ‘Rock Anthems’ and that was it for me. It had some killer artist on: Faith No More, Midlife Crisis, Alice Cooper, Poison, Ugly Kid Joe. Y’know, just badass rock tracks. I heard that and I was sold; I needed to be on a rock compilation that you can buy at a car boot sale that someone wanted to get rid of.

Best rider you have ever had:

Easy! Safari Beat club in Chur, Switzerland! We got hotels, taken out for a killer meal (I had the ostrich steak mmmmmm) then we were given a free bar all night at the venue and this bar was rad! They had so much crazy shit. We tried vodka with a snake in the bottle, some other brutal spirit with a crab in the bottle; just everything. We were there about 10 hours and drank a lot. I believe the bar bill was double what we got paid. We went back a year later and had a €200 limit.

Too many to be able to put here. Be it playing with bands that we adore (Therapy, Alkaline Trio, Bouncing Souls, etc) to playing festivals, getting to go to crazy countries for free to play, Leeds festival. Twice. Getting thrown off tour with OPM and then things turning into a crazed brawl between our old drummer and all of them. One time we were put up in an avalanche shelter on the side of a mountain, which was strange. I’ve probably forgotten more weird stuff that has happened than birthdays I’ve had.

Deepest lyrics one of your songs features:

That is a hard one. I like to leave a lot of them up to the listener to find their own meanings in things but off the top of my head, I’d say maybe a line off ‘21 grams’ off the new record:
‘Bigger things they don’t make a lot of sense to me/I start to panic and I’ll always pull the chord/
In my life well you know I’ve done a lot of things/I’ve met the devil but I’ve never seen the lord’
That one is pretty autobiographical. Basically, everyone has an evil side. I’ve met mine many times and now we’re old friends.

‘Sleeping With The Enemy’ was the easiest lyric wise. It was pretty lazy to be honest. The music was finished and when it come to record I came up with the most basic lyrics in the world. I think there are maybe 23 words in the whole song? Killer song though. I was young, I try harder now.

Favourite song in your set:

This changes all the time. At the moment I would say ‘Gleaming The Cube’ and a new one we have just started playing live called ‘Flatliners’.

Guest you’d most like to feature on your record:

Hardest thing about being in a band:

Trying to find out what Tim (guitarist) does for his day job. I don’t think he even knows. Also, working out when he is on holiday. He freakin’ loves being on holiday that guy. Aside from that everything else is awesome. You take the rough with the smooth.

Interesting fact about one of your members:

Steve (guitar) has never eaten an apple. His body wont let him. It’s really bizarre. He will be holding it and ready to take a bite. The second it gets near his mouth, his hand will spasm and just throw it. It’s the darndest thing you have ever seen.

Jokes you have in the band:

Like any band, just stupid stuff that no one else understands but you find hilarious. Certain things can just set us off on mass crazed rants and people not in the know just stare at you like you’re an idiot.

Key to writing a song:

Jamming them out, telling each other they’re wrong and just taking time to make sure it’s right. When you think it’s done it’s not, it’s totally wrong and you must start again. When ‘Tori’s happy then it’s done!

Seattle to Las Vegas! That was an intense drive in a tiny people carrier with gear. I think it was like 24 hours straight. I’ve never been happier about the fact I can’t drive.

Most inspiring musician you’ve ever experienced:

Mike Palm from Agent Orange. I booked them to play a gig in my hometown and afterwards Tim and I sat up till the early hours with them drinking. He’s everything someone in a band should be. He’s been at it forever but still loves it so much. He was so warm and welcoming; the whole band was. I remember at one point standing outside the venue with him helping to move gear and he just looked at the people in the venue and said ‘How can anyone ever complain about being in a band when you get to do this?’ That stuck with me. A truly amazing man.

Hmmmm. I’ve seen lots recently but I would say Heck (formerly Baby Godzilla) and the NX from Newcastle. Ask me next week and I’ll tell you someone new.

Opening for this band would be ideal:

Faith No More!!!!! I would be so so so happy. I would cry, I would puke and I would soil my pants all in happiness.

I’d love to go to Japan. That place is the future!!! Please someone let us tour Japan!!!

Quote that you’d like to pass on to readers:

Reason for the title of your recent/forthcoming release:

‘21 Grams’ is supposed to be the weight of the human soul. When a person dies, their body instantly loses 21 grams and some people believe it’s your soul leaving the body. I just thought that was pretty cool.

See us live at:

All over all the time! Normally check our Facebook or Twitter to see what crops up. We’ll play anywhere!

The old days of music were better than those current, do you agree:

We are all pretty much fans of 90’s alt rock so yes I agree! Remember MTV Europe in the late 90’s? That got me into so much music. It was just a righteous time for bands.

We haven’t really had anything that strange but we’d like to. We are normally too broke. We once gave away a case we had sprayed gold and filled with sweets to the best stage diver.

Variations you’d like to do on any of your songs:

I’m always interested to hear remixes and stuff. I’d like to get the person who does those dog and cat versions of songs to maybe do a few. Let my dog really enjoy what I do.

What do your fans mean to you:

Lots! We like them a lot. If they weren’t there then we would probably still do it (we have done enough gigs to nobody before) but we love playing to people and through that I have made some of my dearest, closest friends.

I did the measliest fall off stage once and ended up in hospital the next day with broken ribs. Honestly, it was pitiful. There’s a video on YouTube of it and it’s an embarrassment to watch!

Anyone else but us! Nah. It’s always our fault as we’re shit at time keeping and always end up late everywhere. I blame service stations for being so damn exciting.

Sea otter! I’ll let you decide why; I just really like them weird giant swimming dogs!