Hi it’s Gareth here, I had a chance to catch up with Megalomatic at their EP release show. 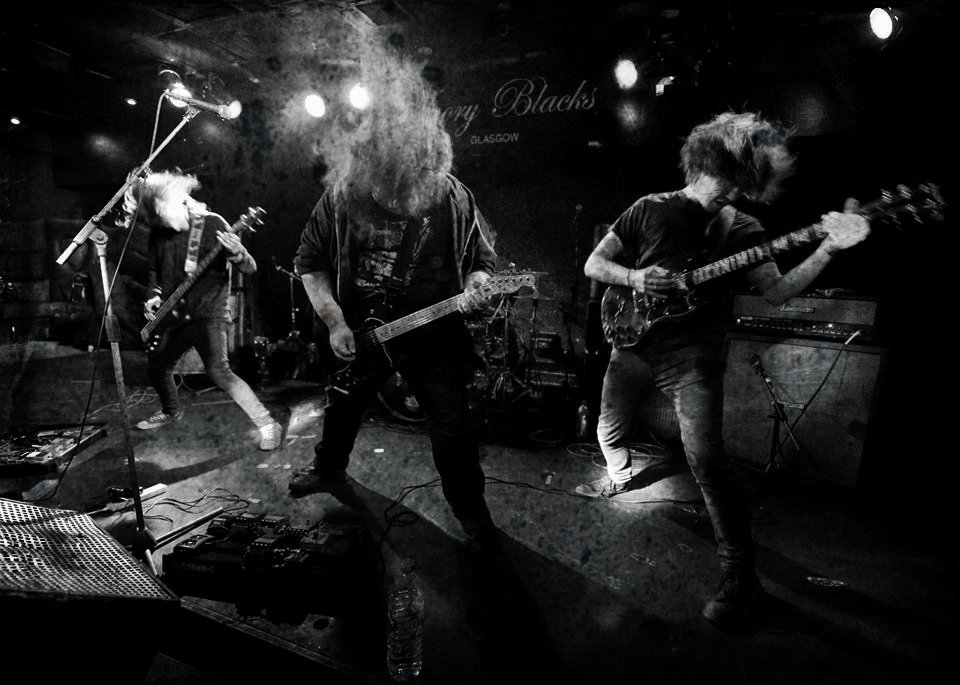 Hi it’s Gareth here, I had a chance to catch up with Megalomatic at their EP release show.

Tonight guys it’s your release show for ‘Hunt For The Midnight Sasquatch’. Are you excited for tonight?

Craig: Yeah definitely, it’s been a quite a long time in the making, we booked (the show) six months ago, before we even had the album. We just started planning when we knew what we wanted to do.

I Have To Ask, The Name: ‘Hunt Of The Midnight Sasquatch’, why did you go with that?

Ben: Can we say what the working title was?
Craig: Was was the working title again?
J Bar: ‘Midnight Sasquatch, Champion of Law and Order.’
Craig: We had, ‘Tainted Nipples of The Midnight Sasquatch’. We are a band that prides ourselves on not taking ourselves too seriously, and we thought that that sort of title suited it. It was Sean who came up with the whole Sasquatsh thing. Our bassist has a weird obsession with bigfoot.
Ben: We actually came up with the final title through the album art work.

What can we expect from the Album? What are we going to get?

Craig: Circus punk vibes, meaty riffs and…
Ben: Chunk!
Craig: And Chunk.
Ben: Just that word maybe.
Craig: A lot of octave pedals and weird times.
Ben: Smack ‘n’ Naste Pasiley (I have no idea? what he is going on about) and seven extremely average songs.

So you mentioned it was six months in advance you booked this venue. So how long was it from when you started recording (the album) until today?

Craig: From when we started recording?
Gareth: Yeah.
Craig: We started recording the album in June. We stated on 21st June, and it took five to six days at a studio up at Loch Fyne at the college. We had plan to record it a lot earlier but, our drummer at the time left and we ended up recruiting this guy J Bar. This kind of put a halt to everything. When he (J Bar) joined the band in April up until June, thats when we did most of the writing for this (album).

As an independent band, is it hard for you to get your music out there to the ‘masses’ for everyone to hear?

Craig: Definitely at the start it was. This is the second release we are doing, we have done a few singles and an EP. We noticed that the only time we could get out music out to people was at gigs and it was difficult to get people out to gigs. A lot of people need incentives to come so we, to get people out there started narrowing the amount of gig we played and maybe did four to five Glasgow gigs a year. Just promoted those gigs to hell and made sure as many people as possible could be there. That’s the way we got our music out there. Getting people out to see us live, hopefully they like our music and buy it. It is getting more difficult to promote things online, so if things are just digitally released its very difficult to get people to listen to it or pay attention to it.
Ben: People get caught up more in the moment of things at at gig more than they do online sitting at their computer in their bedroom.
Craig: Yeah, it’s that kind of thing “Oh, I will come and buy an EP of you” and then when they come and see the band live its “I definitely want to buy an EP”. But if they can get it online, there are more likely to say “I can get it next time” or “I can just listen to it online.”
Ben: If you intend to get it, but you never end up getting it its not helping the bands.
Craig: You’re the expert in that.
Ben: Yeah I’m the expert in that.

As a band from Glasgow, how do you feel the Glasgow music scene is at the moment?

Craig: it is definitely getting a lot better than what it was from when we were all first starting in bands. I have been gigging in Glasgow for four years now. How long has it been?
J Bar: Yeah, four or five years.
Craig: When we first started off as an unders (band that all its members are under 18) in Glasgow scene, it was not a great place to be for people who are under 18. Because there are not a lot of promoters that will take a chance on unders bands and those that do, end up ripping people off. Unders band think that this the normal thing as this is the first sort of gigs they come across.
Ben: Basically the only gigs you can get as it is are the only unders gigs.
Craig: So like, when we started as an unders band it didn’t seem the greatest place but, when you break through that and everyone in your bands is over 18. You can book out venues yourself at prices cheap enough to afford. You can put on a lot of gigs and meet like-minded bands and that’s where the scene starts rather than thousands and thousands of bands trying to do the same thing.

Ben: It all in different parts.
J Bar: It looks like a Z.
Craig: He is making a recovery, almost a miraculous recovery. It’s not as bad as it was when he originally broke it obviously but, he is getting there. He was determined to come and play tonight but end up…
(FAN interruption with hugs)
Craig: He is making a recovery and we hope to have him back for a couple of gigs before the years end. He was adamant that he was going to be back for this one but, with that stair case there and how busy it is looking already it would be a bit difficult to get him in.

So as a band what has been the best moment so far?

Craig: The two year anniversary gig or the recording of the album it would be for me. The two year anniversary, we had had really long period off as our last drummer left, we were teaching Jamie all the songs and writing the album.
Ben: And the last gig we had (before that one) had been a disaster.
Craig: Yeah, it was a horrible, horrible experience.
Ben: We had a lot of bad press and we had to learn from that.
Craig: We then took a break and when we ended up playing our two year anniversary gig in Stereo and there were over a hundred people there.
Gareth: I was there, it was a good gig.
Craig: Sean was climbing on everything and surprisingly he didn’t break his leg then. That was definitely a highlight for me.
Ben: Recording the album was one of the best things for me.
Craig: We recorded it on the banks of Loch Fyne and it was like a small cottage. It was two buildings, the small cottage and a slightly bigger building with the studio in it. It was in the middle of nowhere there were mountains and forest everywhere and being right next to the loch there was such incredible scenery.
Ben: And there was a giant peacock as well.
Drummer: Haha the giant peacock.
Craig: He would stand in the middle of the doorway, like the glass door while we were recording. He was almost like a mascot.

I like to end the interview with a couple of either or questions. So which do you prefer: Crowd surf, mosh-pit, circle pit, or a wall of death?

Last be not least: Drum solo or Guitar Solo?