As the wonder tour of Mayday Parade and The Wonder Years rolled into Bristol, we sat down with Mayday Parade frontman Derek Sanders to find out his thoughts on their back catalogue, favourite things from Sunnyland and his circus act. 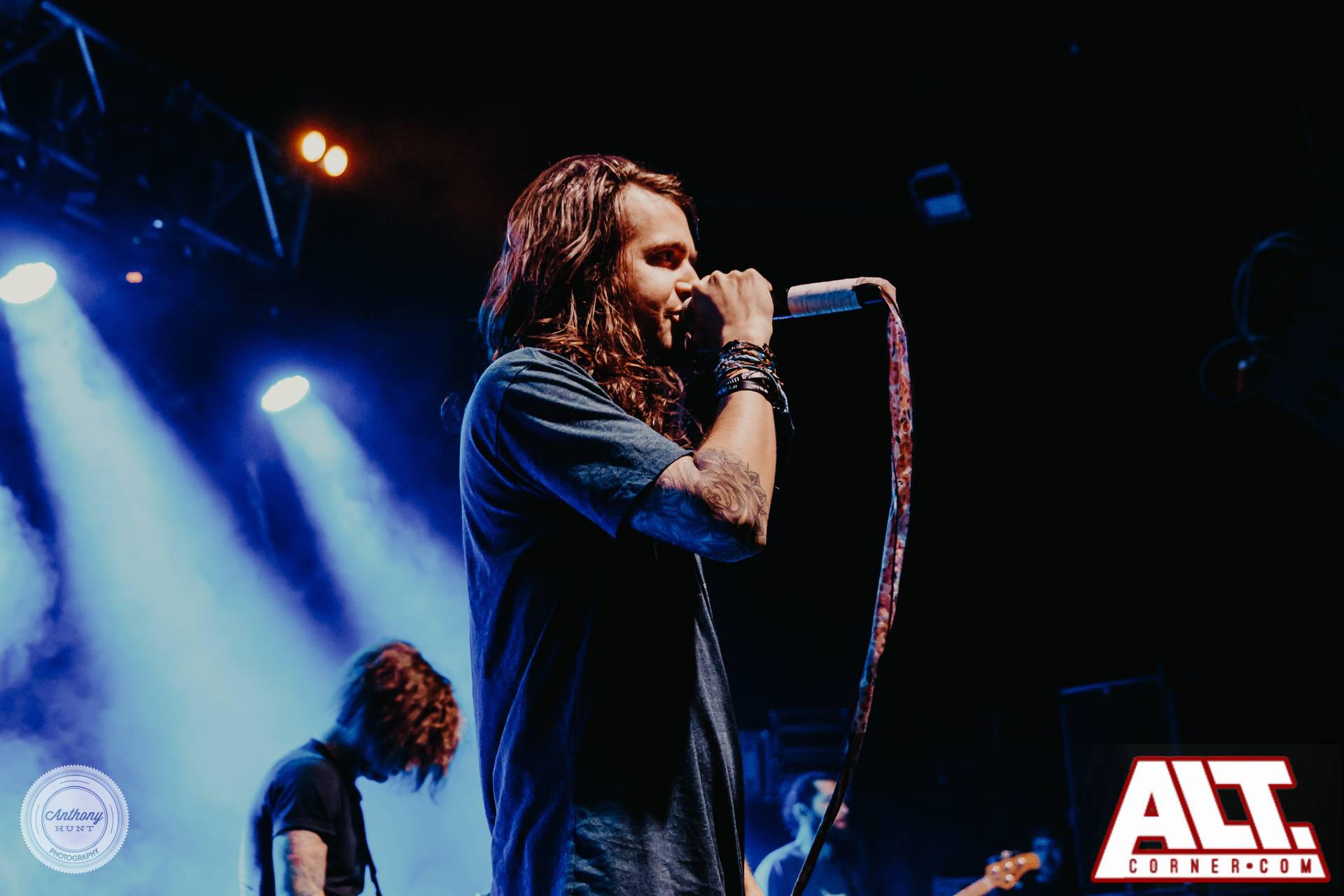 It’s going very well, it’s going fantastic. It’s flying by really, it’s a short tour. There’s great shows, great fans. It’s been a good time. The weather’s actually been pretty nice, a lot nicer than it normally is this time of year. We always come over in the Winter and it’s usually pretty wet and cold and gross so it’s pretty nice and we’re having a good time.

That’s good, have you had a standout sow so far?

You’re playing more tracks from Sunnyland this time around, have you found any that have gone down really well with fans live?

It’s kinda tough to say, It’s Hard To Be Religious When Certain People Are Never Incinerated By Bolts Of Lightning is one of the most energetic and it’s been really cool on this tour, especially with The Wonder Years and people who are into that heavier, well not heavier  but heavier for our kind of music, so the energy to that one has been really cool. I guess that’s probably the most standout thing.

Nice. Do you have a favourite to play?

It’s probably that one [It’s Hard To Be Religious When Certain People Are Never Incinerated By Bolts Of Lightning] or Never Sure. I like playing Never Sure a lot too so one of those I’d say.

Sunnyland has quite a cool inspiration behind the title, can you tell us about it?

It was a really cool spot, and old hospital that shut down in the mid 80s. It was in the middle of Tallahassee and teenagers would sneak in to hang out and stuff, which was illegal. It was so cool. It was pretty big, a five storey building with lots of areas to explore and it was super creepy, falling apart and had these vines growing all over it. It still had hospital equipment; beds, IV stands, and everything and it was a cool place to go with your friends, explore and have fun. So when I wrote Sunnyland, the line in there about that and I remember telling the guys that it could be a cool album title. It’s kinda nice whether you know the story or not.

This is probably a very hard question but which song on Sunnyland has the most meaning for you?

It’s tough to say really. I think maybe Where You Are is maybe the one for me. It’s about losing someone. I think that one is the one I have the most emotional attachment towards out of all of them.

What do you think the easiest and hardest songs to write were for the record?

That’s a tough one. We do writing trips together and we were in a beach house in Florida and I was experimenting with writing something in an open G tuning and was able to write all of Sunnyland in one sitting over a couple of hours. It’s Hard To Be Religious came out that way too and some of them take a long time. Where You Are is one of those. We actually recorded a couple of different versions so that took a little more work. None of them were particularly hard necessarily. It was all pretty natural. I guess the hardest part was whittling the list down, we had so many songs coming into it.

We’ve mentioned It’s Hard To Be Religious quite a few times. I have to ask, how did you come up with the interesting song titles like that and the likes of Keep In Mind, Transmogrification Is A New Technology?

We’ve always done that and it’s probably us taking that from other bands like Fall Out Boy and a handful of others. Some of the guys like Brooks (Betts, guitar) for example, he hates it when we do that and likes it when we just keep it simple, something relating to the song. I’m a big fan of doing the long titles so it’s kinda a bit of give and take, for some we do simple and some complicated. Some of them are from other things like Champagne’s For Celebrating, I’ll Have A Martini is from a movie [Mr & Mrs Smith] with Brad Pitt and Angelina Jolie. On the last three albums we’ve had a title from Calvin & Hobbs, Keep In Mind Transmogrification Is A New Technology is a Calvin & Hobbs quote from probably my favourite strip in the series. It’s Hard To Be Religious is a Calvin & Hobbs quote and on Monsters In The Closet, The Torment Of Existence Weighing Against The Horror Of Non Being is Calvin & Hobbs as well. I’m going to try and keep it going and get one Calvin & Hobbs song title on every album if the guys permit it.

You’ve been a band for over 10 years now, are there any tracks from your extensive back catalogue that you either wished you did something differently on or released at a different time?

It’s really hard to say because it has all been a learning process. There’s a lot of things I guess ultimately I wish we would have changed or done different but it’s also how we learnt. For example, our second album Anywhere But Here, I think that’s probably our least favourite album, just because it was a weird time for the band. We had just kinda started to become successful and just signed to Atlantic Records and kinds had all the creative control taken away from us and had to make the album Atlantic wanted and not the album we wanted to make. We had to do a bunch of co-writing which we didn’t really want to do but we were just trying to make the label happy. There were a lot of songs that we loved that the label wasn’t into and so we weren’t able to record those. There was a lot of things that we changed. There’s parts of that album that I loved but there was a lot of missed potential. But again, the whole process was a learning curve for us.

What are your plans for after the tour?

We’re staying busy and we have a lot of stuff planned that’s unannounced so there’s a bunch of stuff I can’t talk about yet but we have a bunch of international stuff. We’re continuing forward, doing South East Asia and all that, some festivals, we have one in New Orleans coming up. We’re playing Mexico City with The Maine. The Summer us going to be a whole big thing that’s unannounced but I’m really excited about. We’ll be talking about some new music as well. There’s a lot of things in the works, different songs we’re going to be recording for compilations. I’m starting to write some stuff and send demos to the guys and get the ball rolling with some new tunes.

Nice. We like to end with some fun questions. If you were going to give one song to an alien that best describes Mayday Parade, what would you give them?

I think I’d have to go with Oh Well Oh Well because it has a lot of elements from the band. It’s got a slower, almost ballad, intro, then it fires in and it’s got the big, long ending. It covers a lot of ground in one song of what we do.

You can pick one song of yours to be covered by any artist, who would you pick and what would they cover?

It’s a tough one. The band would probably be Third Eye Blind because that’s my favourite band of all time. They would probably have little interest in covering one of our songs. The song, it’s really tough to say, but maybe Without The Bitter The Sweet Isn’t As Sweet, that’s always been one of my favourites.

Who do you thing is the most underrated band in your local music scene?

I would say it’s a band called Stages And Stereos. They’re friends of ours and Daniel Lancaster, the singer, is the brother of Jason Lancaster who used to be in our band. Daniel actually sings on the end of Jamie All Over. He’s a super talented dude and one of my best friends. They’re a great band and still putting out music and touring. They’re putting out a record soon and I recently did a guest vocal on it.

That’s a very tough one because I enjoy both those aspects. I guess I’d probably still want to create music but I love both ends of that so its a tough one. Ultimately I think even if I wasn’t in a band, I’d be writing songs because I love doing it and think I always will until I’m unable to.

I’d have to learn how to do something interesting. I can kind of juggle, not very well, so as I’d have somewhat of a head start there, I’d try to master the art of juggling and be a star of the circus.