We caught up with the members of Norwich rock group Kaves after playing their debut show and releasing their latest single TBT. How was your recent debut show? Caitlin – ‘ Amazing! I never expected to receive such amazing support so quickly, and seeing everyone respond so positively was honestly wonderful!’ Tim – ‘ There was a great […] 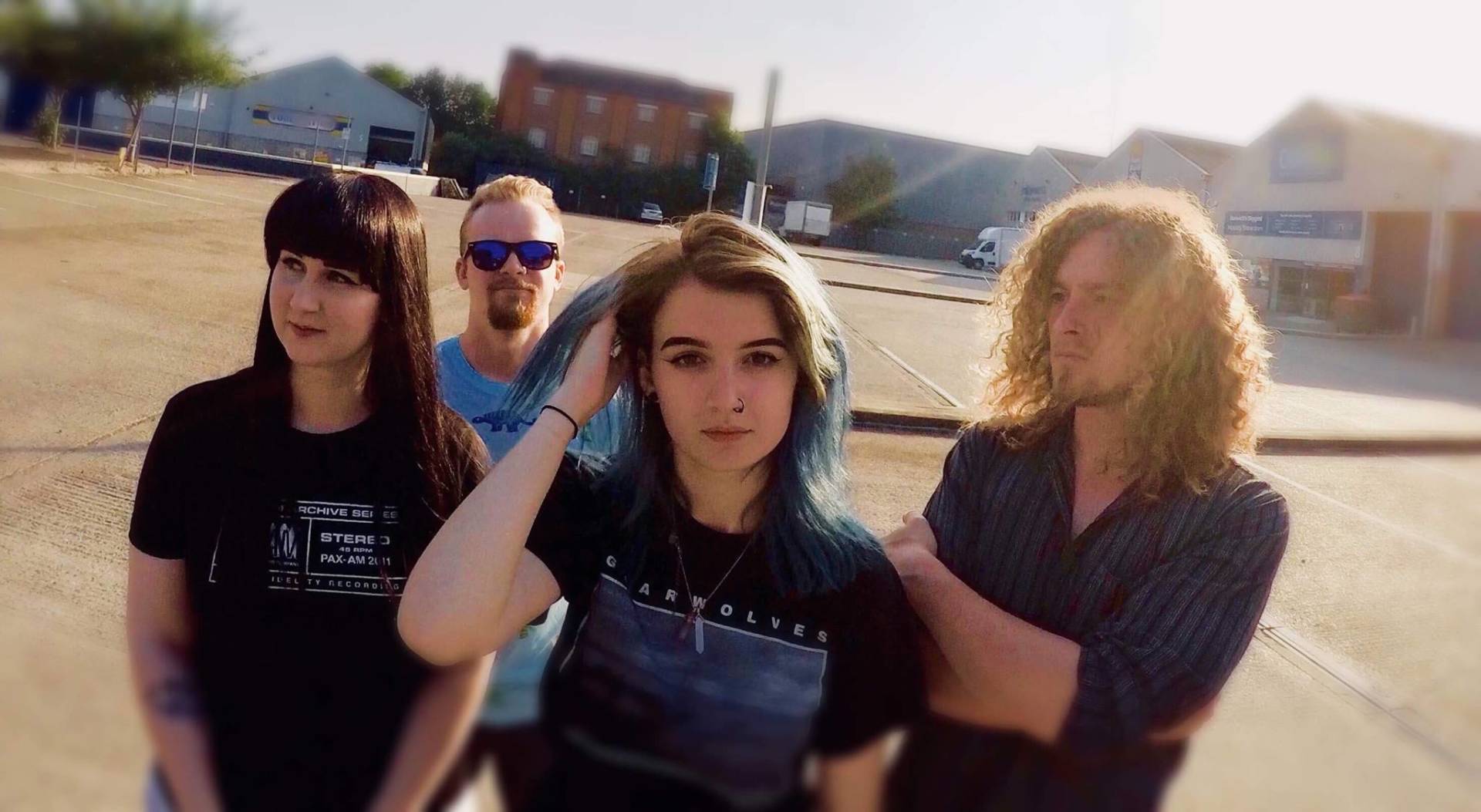 We caught up with the members of Norwich rock group Kaves after playing their debut show and releasing their latest single TBT.

How was your recent debut show?

Caitlin – ‘ Amazing! I never expected to receive such amazing support so quickly, and seeing everyone respond so positively was honestly wonderful!’

Tim – ‘ There was a great energy from the crowd and it really felt like we were creating something that people could get. ‘

Mia – ‘It was amazing to finally show people what we’ve been working on and to see how the songs worked in a live setting!

Matt – ‘It was great to see that there was an interest in what we were doing. Was fantastic to see some old faces there alongside so many new friends. ‘

How was the release of your new single TBT?

Caitlin – ‘It was something that I’ve dreamt of for so long, having a song out for people to download and listen to. TBT was a great song to start off with!’

Mia – ‘As a band I guess it’s always tricky to anticipate people’s reactions to your music, but we’ve been lucky to have loads of positive feedback!

Matt – ‘The response to TBT was really encouraging,  It was something totally different from our last release so we didn’t know how people would react.  It was really interesting to hear that people had recognised influences in the sound that even we didn’t.’

How did writing and recording the single go?

Tim – ‘It was one of those tunes that kind of writes itself, we were just the conduits! It all began with a riff and a melody and the rest just kind of fell into place. As for the recording, that was a joy because we are able to do all of that ourselves!’

Caitlin – ‘As this was the first time I’ve ever recorded professionally, it was definitely challenging, there were certain notes that just wouldn’t sit right in my voice! But the whole day was so enjoyable, especially seeing the donkeys that live just outside the studio!

What was the inspiration behind TBT?

Mia – ‘TBT was an idea we’d had kicking around for a while but needed a strong vocalist to be able to do it justice. From the first time Caitlin sang it, she just brought it to life! Lyrically, it was about those people who like to control and stifle the people they supposedly care about. ’

Matt –‘We wanted a track that was full on straight out of the gate but that still had dynamics and melody. There was an element of reggae inspiration to the riff which we thought would be interesting when mixed with a big, driving, rock feel.’

Is it a good indicator of how your future music is going to sound?

Tim –‘Yes and no. As a band we always want to push and take what we do to the next plateau! I think TBT is a representation of how we have all grown as musicians since we started, whilst still acknowledging the music that initially ignited us.’

Mia –‘ It’s hard to say yes or no really! We’re strong believers in having total free will over what we write. Each member of the band is a massive music fan and has their own eclectic taste in music, so we absolutely utilise that! So I guess it’s safe to say you never really know what’s coming next with us!

Matt –‘TBT definitely represents the heavier side of the band, we do have more material in that high energy vein but there is also some more chilled out stuff on the way.

How would you describe the sound of KAVES?

Caitlin – ‘We have a very diverse set when it comes to songs. That is part of what I love about this band’

Mia – ‘It’s a bit of everything thrown in together really! We don’t like to pigeonhole ourselves too much, it’s nice to have the freedom to explore our ideas! We usually go with ‘alt’ as it covers most bases!’

Tim –‘That’s a tough one! All of us have eclectic tastes. We all like the same music as much as we like different music, which is cool because all of those tastes get mixed up. There are no genre boundaries for us, the vocals, drums, bass, guitars and any other instruments are all just as important as each other. If you really, absolutely had to put a label on us then it would probably be best summed up with Alternative. Although once we were referred to as Dark Pop and I always liked that!’

Matt –‘The only objective we have in this band is to create music that excites us and that we really care about. There is such a broad spectrum of taste, influence and style between the four of us which means we never really know where the sound is going to end up. We have some pedal to the floor, aggressive rock songs, some with an EDM influence and some far more dynamic mellow tracks.

What is it like starting a band in Norwich?

Mia – ‘It’s tough starting a band anywhere I’d imagine! The toughest part is getting the right people together and hashing it out in a rehearsal room. We’ve been fortunate enough to have some great venues to play in Norwich, here’s to hoping they’ll stick around a bit longer!’

Tim – ‘Starting a band in Norwich can be tough. Especially now that the venues are slowly disappearing, which is absolutely devastating because we all cut our teeth as young musicians in these venues and to see them become empty buildings is difficult. Having said that, the Norwich music community is strong and passionate and will get behind bands! So, although it can be tough at times, it feels great to be a part of this strong community.’

Matt – ‘There is a very diverse and passionate music scene in Norwich, everyone supports and encourages each other, with is fantastic. The music industry landscape is constantly changing and that has a massive effect on new bands. We have all been playing in bands from a young age and have experienced a lot of the fun and excitement but also seen a lot of detrimental changes, such as venues closing at an alarming rate.’

What bands have you been influenced by?

Mia –‘ We love pretty much everything, but some of our absolute favourites are Yonaka, Deaf Havana, Butch Walker, Ryan Adams, Metallica and Boston Manor

Tim – ‘Well we all bring our own passions into the music and maybe also something we might be into at the time. Some of these bands\artists include Nothing But Thieves, Ryan Adams, Don Broco, Deaf Havana, Yonaka, Butch Walker to name but just a tiny fraction of our influences. Myself, being the “metal guy”, always try to get some Metallica in there!’

Matt – ‘We are all first and foremost life long music lovers so the list of influential bands would be virtually endless. I personally built my musical foundation on the classic rock giants my parents listened to such as Zeppelin, Floyd, the Doors, and Jethro Tull but some of my biggest influences lately have been Nine Inch Nails, Nothing But Thieves, Don Broco, Dr Dre, Run the Jewels, Deaf Havana, Alt-J and London Grammar, to name but a few.

What would be your dream festival slot?

Caitlin – ‘I think any artist that doesn’t aspire to play Reading and Leeds would be lying! Personally, I’d love to play Download or Slam Dunk!’

Tim – ‘It’s got to be Download for me! It’s a legendary festival and has so much history, to be a part of that would feel amazing!’

Mia – ‘It would be a dream to play any major festival, Glastonbury being an obvious one! Download would be amazing, as would Reading & Leeds!’

Caitlin – ‘As a band, we’re all massive admirers of Yonaka, who we’ve seen work their way up to where they are now! Would be such an honour to support someone who has done so well on their own terms!’

Mia – ‘There’s a band called Yonaka who we’ve been fans of since pretty much the start of their career, so it would be pretty special to get to tour with them’

Tim –‘To be honest, it would probably be the Foo Fighters for me. They are a band that have such a strong, commanding presence, to tour with them would be a masterclass. I also feel like they are the kind of guys that you could easily chill out and have a beer with without feeling intimidated. Nothing But Thieves would also be a cool tour, for sure!

Matt –‘It would be brilliant to tour with a band that you really get on with. You spend a lot of time together so it would be good to be able to have a laugh. The Don Broco guys seen like good fun judging from their video ideas, plus they’re an incredible band. ‘

If you could play any venue in the UK which would it be?

Mia – ‘The Royal Albert Hall, Brixton Academy or Hammersmith Apollo would be a total dream come true! Seen so many amazing shows at those legendary venues’

Tim –‘Hammersmith Apollo would be really cool! Its another one of those musically historic venues which has had so many fantastic bands come through and play it. It has an energy when you’re inside it and I can only imagine how that energy feels when you are a part of it!’

Matt –‘One of my favourite big venues is the O2. Every time I’ve seen a band there I’ve imagined us on that stage, with all the lights and effects we could get our hands on of course.’

What are your hopes and plans for the rest of the year?

Mia – ‘We’re finishing up some recording right now and hoping to release a new single in early November. We have a pretty special gig on the 28th December at the Waterfront studio with The Visitors and Blood Like Honey, so we’re really excited to get back on stage!’

Caitlin – ‘We’ve been sitting on so many amazing new songs that I can’t wait for people to hear! After only doing three shows, I’ve totally fallen in love with performing on stage, and cannot wait to continue doing so with such talented musicians!’

Matt – ‘We’ve had a fantastic second half of the year so far with a lot of fun shows and interesting opportunities coming our way so I would love to just keep that momentum going. I’m also, as always, looking forward to seeing what we can come up with creatively before the end of the year as we never know what’s coming next. We’ve also been sitting on some material for a long time that we’ve now finally been able to record so that we be seeing the light of day soon which is really exciting! ‘

Tim – ‘Create more music and have the best time doing what we all do best! Maybe a Nandos or two…’