Interview with Speaking In Shadows

After recently finishing their tour with Altered Sky, we had a chance to catch up with Speaking In Shadows 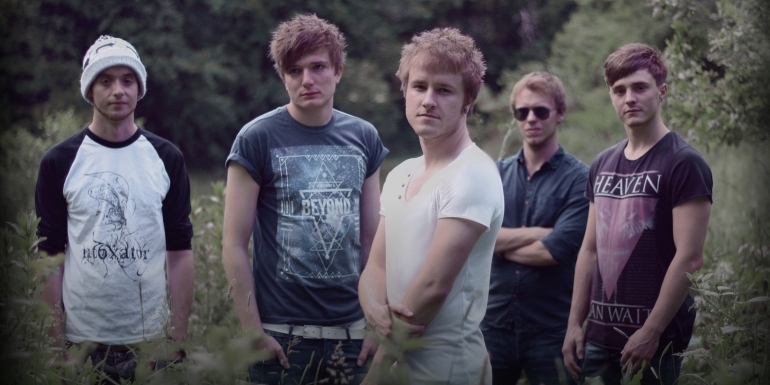 After recently finishing their tour with Altered Sky, we had a chance to catch up with Speaking In Shadows…

Taking it from the beginning, where did the band start and how did you guys meet?

Our origin story is a humble yet inspirational tale of 5 boys becoming men. In the small town of Nuneaton, Ali Grant and I (Sam) had spent a couple of years faffing about in a Metalcore band called Reminition. On the opposite end of the spectrum Adam and Lewis were in a Pop Punk band known as The Faze. Both bands came to a merciful ending at around the same time for various uninteresting reasons; for the 5 of us though the thirst to produce tasty jams (music not spreadable fruit) remained.

Thankfully we all already sort of knew each other; Ali and Adam worked together and Grant and Lewis are brothers. Through the mutual idea of creating fun yet forward thinking music Speaking In Shadows was born, thus 5 boys became men.

Where do you get your inspiration from when it comes to writing music?

Recently we’ve been inspired by our trials and struggles as unsigned musicians. We have never been under any illusion that achieving a full time career in music was going to be an overnight process. This past year in particular whilst rewarding has proved to be particularly challenging and has added strain to various parts of our lives. Thankfully the result has been a much ballsier and personal sound.

Do you have a specific process you go through when writing?

Our writing process is highly collaborative. Whilst we all compose our own parts everyone weighs in on each other’s instruments and offers up ideas. In our opinion this offers up the best and most organic result. Five brains are better than one right?

What’s been the best part of the tour for you?

All the crowds were great but we were particularly pleased with the Glasgow turnout and crowd response. We’d heard tales of the craziness of the Glaswegian Altered Sky fans and a room packed full of the noisy buggers delivered that in bucket loads. Combined with a alcohol fuelled night of celebrating with a few of the guys from Altered Sky it goes down as a night we will always remember(well most of it anyway).

How do you guys go about choosing songs for your setlist? Do you change it often?

We always try and keep the set fresh to ensure our fans don’t get bored or find our show too predictable. Of course there are crowd pleasers and favourites like ‘Technicolour Trainwreck’ that will always be played.

When playing half hour sets, as we tend to do, it’s important for us to keep a high level of energy and crowd engagement in order to provide a proper show in such a short space of time.

Is there any message you want your fans to take away from your songs?

We try to avoid preaching a specific message through our songs, that way our fans can interpret their own meanings and find their own very personal enjoyment when they listen to us. I guess we try and be as inclusive as possible; music is a massive force for connecting people, we try and promote that idea as much as we can.

Last year you released your latest EP ‘The Lies We Lead‘, how has it been received?

The ‘Lies We Lead’ was a massive step for us in terms of production quality and song writing, upon release our fans both old and new reacted positively towards the new musical direction. In hindsight the 5 of us realise the style and feel of the music was a bit more sporadic than we initially intended, that’s something the critics definitely picked up on.

On the tour you talked about your new EP ‘The Anchor‘ what can we expect from this and when will it be released?

With ‘The Anchor’ we stopped concerning ourselves with what we thought people might want to hear and instead allowed ourselves to have a bit of fun during the writing process. We’ve become a bit more riff focused as well, who doesn’t love big fat burger riffs? The result is a much more cohesive collection of songs that represents the best material we’ve ever written. I know every band says that before a new release, but in this case it’s definitely true. You should expect ‘The Anchor’ to land this Autumn.

Are there any bands that you would love to tour with that you haven’t yet?

There are obvious big bands like Don Broco and Mallory Knox that we’d love to share the road with. We haven’t yet managed to get out with our hometown bros Drop Down Smiling, which is something we’ve spoke about doing since we first met the guys 5 or so years ago.

What advice would you give to a new band starting out in the music industry?

To anyone starting out I’d advise you spend some time focussing on your craft. Having a good business ethic in this industry is great but if you haven’t got the music or live show to back that up there’s only so far you will go.

What’s next for Speaking In Shadows?

In the coming months expect to see the new music video for our first ‘The Anchor’ single ‘Capsized’. We’ve gone for something a bit different visually and narratively, the end result looks really cool, plus there are some great shots of Grant emerging from the ocean for all you ladies. We will be out on the road towards the end of the year with some very close friends, I can’t say who yet.

Of course the full EP will be out in the next few months as well. To coincide with the release we’ll be playing at our hometown venue The Queen’s Hall. The show for The Lies We Lead release sold out and went down as one of the best gigs we’ve ever played, so we have high hopes for the upcoming hometown show.

You can find Speaking In Shadow here: