Interview with Some Skeletons

With their upcoming debut album coming out soon, Gareth had a chance to catch up with Some Skeletons… 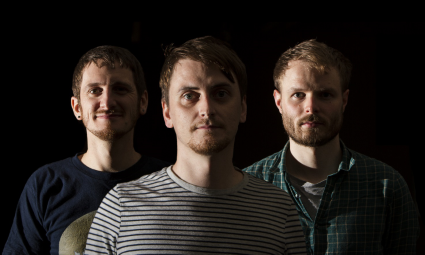 With their upcoming debut album coming out soon, Gareth had a chance to catch up with Some Skeletons…

TAKING IT FROM THE BEGINNING, WHERE DID THE BAND START AND HOW DID YOU GUYS MEET?

We all met at Nottingham University while we were students there. There was quite a lively band scene, and James and I often competed in battle of bands and played gigs with each other’s bands around Nottingham. Half of Simon’s band were based in Derby, and so they were probably less embedded in the Nottingham Uni scene, they seemed like the cool aloof band who managed to get on the radio and who people in the real world actually liked! We all stayed here after finishing uni, and eventually ended up in the same band about 7 years or so ago when James and Simon joined mine and (former Some Skeletons member) Adam’s existing band. After a couple of years the stuff we were writing was so different we ditched the old band and started Some Skeletons in 2011.

YOUR DEBUT ALBUM ‘VIGILS’ COMES OUT 4th DECEMBER. HOW DOES THIS VARY FROM THE 2nd EP ‘AND SIGNS & AMPERSANDS’?

The last EP was our attempt to record something grand and epic sounding with the budget and tools at our disposal. I think at times we pulled it off, but perhaps overdid it at times and maybe obscured the songs a little. It was also recorded all over the place with friends in spare time, wherever we could use to do some recording. It was a lot of fun but seemed to take forever. To me, the obvious difference between ‘And Signs’ and ‘Vigils’ is the energy in the songs. I think stripping down to a three piece has turned us into a more raucous band and because the songs were recorded relatively quickly we managed to capture that pretty well. There’s only one guitar line going at any time on the album, whereas on ‘And Signs’ we sometimes had three or four, and always two.
Also the subject matter is totally different – lyrically ‘And Signs’ was mainly me going through a bit of emotional turmoil, whereas ‘Vigils’ is sort of a concept album where a lot of the songs are written from the perspective of people in the story we’ve come up with. It’s been a totally new way of writing for me, and although obviously you draw on your own experience and emotions when writing lyrics it allows you to explore a much greater range of thoughts and phrases when you’re not just trying to get out your inner angst! So I’d say that ‘Vigils’ is a more varied and occasionally fun affair, and more energetic and more narrative.

A LOT HAS HAPPENED TO YOU GUYS…THE RELEASE OF THE EP, TOURING AND  AND WORKING ON THE ALBUM. ADAM LEFT THE BAND, YOU THEN CHANGED TO A THREE PIECE AND OF COURSE, JAMES WAS IN A SERIOUS ACCIDENT…

Yep. We made the decision not to replace Adam pretty much straight away, and I think that was a great thing to do. Adam contributed a huge amount to the band, but it seemed like a more exciting challenge to see what we could do as a threepiece rather than get someone new in and try and make it work. Also we don’t have any friends so wouldn’t have known who to ask. It was also decided pretty early on that we wouldn’t try and hide the fact we’d lost a guitarist when writing and recording. Personally that’s made me far more thoughtful as a guitarist, as now I can’t just opt to play the simple part whilst Adam plays something complicated.
Songwriting for a new EP was going pretty well, then James got hit by a car whilst riding his bike home from work. We actually had practice that night, and James sent us a message saying he “probably wouldn’t be able to make it” and we naturally took the piss out of him and wished him well, assuming from his tone that he was basically ok. Then we didn’t hear from him again so texted his girlfriend and it turns out he was pretty delirious with adrenaline when he’d sent the original message, and was now in hospital and had to undergo pretty major surgery on his shoulder. It put him out of action for a bit, we had to cancel a mini tour and obviously couldn’t practise for a few months while his shoulder recovered, but it could’ve been so much worse, and he got a new bike and some excellent tales to tell from the experience too.

BACK TO THE ALBUM, WHERE DO YOU GET YOUR INSPIRATION FROM WHEN IT COMES TO WRITING MUSIC?

Musically that is a difficult question to answer. To be honest I have no idea, personally I never really have an idea of what type of thing I want to write, I just start messing around with a guitar and come up with a beat on the computer, then see what happens. Lyrically, this album all stemmed from James and I reading ‘On The Beach’ by Nevil Shute, and agreeing that a sort of apocalyptic setting might make an interesting concept for an album. What really appeals to me about that book though is how normally the characters behave for the most part in spite of the fact they know they’re totally doomed. Our album isn’t quite as cut and dried as that, as we never go into the specifics of what’s happening, but we thought it’d be cool to explore how people might act and behave if there was some sort of unspecified potentially terminal threat to them. We set it in a coastal town, which was good for me as I grew up on the south coast, so I drew on a lot of the places I’d been and the people I knew growing up.

DO YOU HAVE A SPECIFIC PROCESS YOU GO THROUGH WHEN WRITING?

Generally Simon or I will come up with the bones of a song and then we’ll hammer it out in the practice room, go through a couple of demoing stages until everyone is happy with what they’re doing. It’s pretty democratic and it’s very rare that the song will sound much like the original demo. Simon or I will generally handle lyrics depending on who came up with the original demo, but on the album there’s a few songs where we all chipped in lyrically. We function best when everybody is contributing to each song, and it’s unusual that one of us will tell another what they should be playing in a certain bit. Of course that might be because we’re all too terrified of treading on each others toes.

HOW DO YOU GUYS GO ABOUT CHOOSING THE ORDER OF THE SONGS ON THE ALBUM?

We wrote an outro and then reprised (or more accurately pre-prised) part of it for an intro, so that bookended the whole thing nicely. Then we worked out a theme in the lyrics, whereby the first half of the album concentrates primarily on youthful characters as the protagonists and the second is about older people. We thought the songs flowed nicely in that order too, and it was pretty much sorted before we went in to record the album.

IS THERE ANY MESSAGES YOU WANT YOUR FANS TO TAKE AWAY FROM YOUR SONGS?

Not really, I don’t think we’re a particularly sloganeering band and it’s not something we really think about when we’re writing. I’d say we’re pretty insular and write for ourselves, so it’d be interesting to know if anyone does get a message from our stuff.

WHAT ADVICE WOULD YOU GIVE TO A NEW BAND STARTING OUT IN THE MUSIC INDUSTRY?

Ha, I have no idea! I don’t really feel in a position to offer advice but the most important thing is to keep it fun, otherwise it’s just not worth the effort. It really depends what you want to get out of it, my aims have changed so much in the time I’ve been playing in bands, right now I just want to have fun with my two buds, write songs we like and hopefully other people will like them too.

WHAT’S NEXT FOR SOME SKELETONS?