Hi Gareth here. During Skarlett Riot’s Scottish dates on their ‘We Will Rise’ Tour, I had a chance to chat to their Lead Vocalist and Guitarist, Chloe Drinkwater… 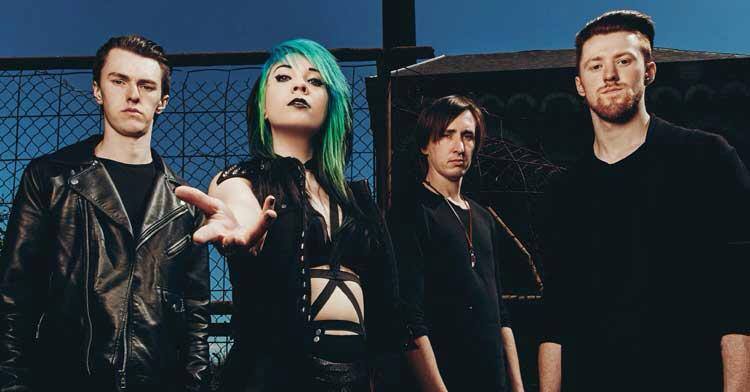 Hi Gareth here. During Skarlett Riot’s Scottish dates on their ‘We Will Rise‘ Tour, I had a chance to chat to their Lead Vocalist and Guitarist, Chloe Drinkwater…

So how are you tonight?

Chloe: I’m ok thank you. How are you?

How did you guys meet and form a band?

Chloe: It was back in 2006, we were a different band under a different name. We all met at school and we were just doing the covers scene. Pubs, clubs and playing other peoples song and just kind of jamming as a band and connecting with each other. And then a few years back we decided we wanted to write our our music. So we then formed a Skarlett Riot with a new bass player (Martin), since then we have just been gigging around and hopefully progressing as much as we can.

For those that may not have heard of you (Skarlett Riot) how would you describe your sound as a band?

This tour is to promote your EP ‘We The Brave‘, how has that EP been received so far?

Chloe: Amazing. It’s been really, really, really good actually. We had great reviews from likes of Kerrang!, Powerplay Magazine, Big Cheese and most importantly our fans are really digging it. We have been getting the kind of comments that there was ‘Turn Me Down‘ the album and then ‘We Are The Brave‘ is more harder and that it has progress onto a new level and I think it’s a lot heavier than ‘Tear Me Down‘, it’s got something a little more of our own sound to it.

I saw you play last night in Glasgow. You were awesome by the way.

How are you finding traveling to Scotland? I know for a lot of bands it a long way to travel.

Chloe: It’s fine, it’s be great and the scenery has been amazing as well. We have been walking around Edinburgh today and it looks like something out of Harry Potter, its been great. But, on the way here, we actually had an accident in the van, We hit a taxi and now we have a massive dent in our van. So going off that; not to good on the travel part but, the places have been great.

Chloe: We are all fine. Danny (who was driving) is a little shook up.

You mention you guys did cover music before Skarlett Riot. If you had to put a cover song into your set list, what would it be and why?

Chloe: Ooh Wow. Not been asked that one before, it’s making me think. I would do Metallica ‘Fuel‘. We did that as a covers band and it kind of flopped on its ass. I think because it’s so heavy, you got the double kick drum in there, the really powerful guitars and it would give me something a bit more gritty to sing. It would be a challenge something a bit different.

Chloe: We definitely want to go back to Download. We play Download back in 2012 and it was amazing, such a great experience. A festival we would love to play: It would be Vans Warped Tour in America. You get the most out of that festival. You play like, I don’t know forty odd shows all together…every single day. We would love that, it would be fab.

You Guys have been compared to Heaven’s Basement and Halestorm. Is that a fair comparison?

Chloe: I say so, yeah. I think if you kind of mixed Heaven’s Basement with Halestorm you would probably get something similar to us. We like to think we got something unique but, everyone gets compared to another band, its just what we do (everyone does) in general. Those other bands are fabulous in their own right. They put on great shows,and have strong vocalist(s). So for me it’s definitely not an insult.

With Facebook now making it harder for band to connect with fans via their (band) page. I have noticed you and a lot of other bands are adding (or accepting) fans on Facebook. Has that lead to any issues with crazy fans messaging you?

Chloe: No not really. We constantly connect with our fans and it actually helps because, you are kind of getting the word out on your page about your gigs and then, people are seeing it on your personal one and then, we all tag each other on our personal one and it circulates to more and more people. So gig wise it’s good. It’s great. it has been a big help but, no crazy stalker fans as yet. Normally our crazy stalker fans go to my others folder on Facebook so I don’t actually see what they say.

As you are the lead singer of a female-fronted band, have you come across any walls as a band? Like from other bands, radio stations, promoters and even fans?

Gareth: As in them putting you down because you are a female fronted band.

Chloe: No but, we do get your usually negative comments like: “Get back in the kitchen” and “you are a female you shouldn’t be on the stage”. So yeah, we generally get that and sometimes you get the people with the attitude towards us thinking that we have only got where we are as we have an “attractive singer” in the band or whatever. I think no matter who you are there is always some jealousy there and everyone will make an excuse to make themselves feel better. I think being female fronted helps in a way as well because, you do stand out from other bands as opposed to, if you had a full male fronted line up at a festival, people don’t remember your name but…that one with the female were good. So it does have its peeks as well!

I like to end the interview with a few fun questions. So which do you prefer: Crowd surfing, mosh pits, circle pits or wall of deaths?

And last but not least. Drum solo or guitar solo?