Huxtable take on the A-Z challenge

Scottish alt-rock duo Huxtable have just released their new single Don’t Do Anything Fancy and their new EP Change Shape Future is set for release on September 29. We asked the pair to take on our A-Z challenge! A song which made you want to make music? Broono– I think when we first heard the Biffy Clyro […] 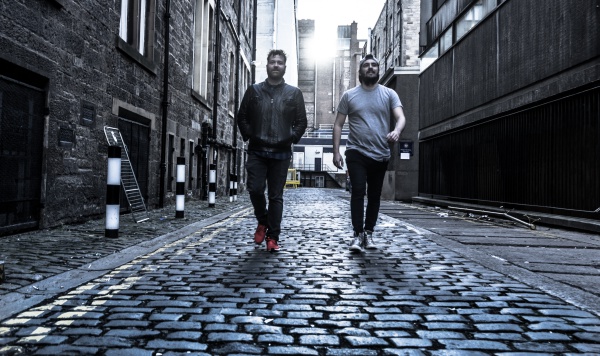 Scottish alt-rock duo Huxtable have just released their new single Don’t Do Anything Fancy and their new EP Change Shape Future is set for release on September 29. We asked the pair to take on our A-Z challenge!

Broono– I think when we first heard the Biffy Clyro ‘Some Kind of Wizard‘ on ‘Infinity Land‘ it really inspired us. As an artist there’s always a song that you wish you had written, and for us that in turn made us want to write music.

Jordan– Infinity Land as a whole is really inspirational- but right now Everything Everything are exciting me- making me want to write more and more!

Jordan– I’m going to say sleeping for 1 and a half hours at a time trying to drive back from London after having been on tour for 11 days. Virtually no sleep, not wanting to pay for parking and using boxer shorts as a face cover to keep the sun out my eyes. Or the time it took us 11 hours to get back to Kilmarnock from Doncaster because the motorway was closed. No phone between us. Kept getting lost. I would have welcomed death at that point I was so tired. You need to learn to drive Broono! Haha .

Jordan– That’s not really for me to say! The new record is open to interpretation.

Jordan– Easiest isn’t exactly the word I would use- but Super Toxic off the new record basically arrived in my head fully formed. I can’t explain it- just the song was ready all I had to do was record the demo.

Both– Right now it is Don’t Do Anything Fancy.

Both– We’d love to get Yelawolf or Post Malone to drop some lyrics on a track, that would be amazing.

Sleeping in a van at service stations where they have a 2 hour stay limit gets pretty annoying. See craziest moments. Same thing

Bruno is a massive fan of digital foundry on YouTube which is a channel that runs graphics comparisons for computer games.

Jordan– It’s not in a cross dressing way. I can’t actually explain it myself. Handbags too.

Broono– Jordan always loses the van keys! Whenever he gives them to me I pretend I’ve lost them and watch him freak out.

Jordan– I do. I can never keep track of them.

Broono– Don’t be afraid to come out your comfort zone and try writing in different ways so you can work on evolving your writing. If you pigeon hole yourself it’s harder to get out of the habit.

Jordan– It took us until about a quarter of the way into writing for this record to decide to throw the rules away and just make something that sounded good without thinking if it fit.

To the bottom of Wales to pitch up a tent in flooded grass and play in the rain.

Jordan– My jacket got ruined and I woke up in a puddle. But that show was class! We had fire cannons. Who doesn’t like fire cannons??

Probably Dave Grohl because he’s been behind the band and in front the band so I guess he’s seen all perspectives which is inspiring.

Broono– Check out Megalomatic they’re from around our parts and are incredible.

Jordan– Twin Heart– They are joining us on tour. I’m excited about that!

Jordan– Foo Fighters or Muse. We don’t ask much.

Broono– It’s got to be America, you could spend a year there and still not cover it.

Jordan– Im going with Japan. Got to experience that!

Broono – In regards to music ‘fools steal and geniuses borrow’

The last single me and Jordan released over a year ago, at that time we weren’t really sure where we were going with the band so we basically sat down and talked it out as to what we were going to do and if we were going to go forward, which obviously we did. A band is like a marriage and you need to keep trying, so in regards to the title Change Shape Future, we had to change the way we were going to go ahead with the next chapter and mould it into the this new record we made, you can’t really move forward unless you change and shape things to become your future.

We prefer older music because today’s stuff is all about radio and who can make the hottest pop track rather than it being about actual music.

If you come along to the EP launch at King Tuts on the 29th of September you’ll see some weird merchandise.

Broono– I’d like to try and venture into an acoustic side for these new tracks because it just didn’t work with our older stuff.

Jordan– I’d be up for some kind of trap remix.

We love our fans, they are the dudes that come to shows, buy our records and enjoy the party, that’s what it’s all about.

Broono– Just as Jordan and I were writing our first record, I was at a Halloween party and broke my arm, I was out for 11 weeks, I was dressed as CM Punk for the WWE but I promise I wasn’t doing any elbow drops.

Jordan– I was a mess that night. Broono’s girlfriend at the time was a nurse and went from being a steaming party reveller to full nurse mode. It was amazing to see. Meanwhile I’m in the corner horrified that his arm looked like wet spaghetti.

Jordan– Probably Broono’s for sleeping in.

Broono– Imagine a Gorilla had sex with a Peacock…just that.