Our A-Z challenge is a fun way to get to know the upcoming talent across the world! Up next, we have Manchester’s emo power-pop newcomers Hot Milk who are gearing up to support You Me At Six across Europe and Deaf Havana on UK tour! 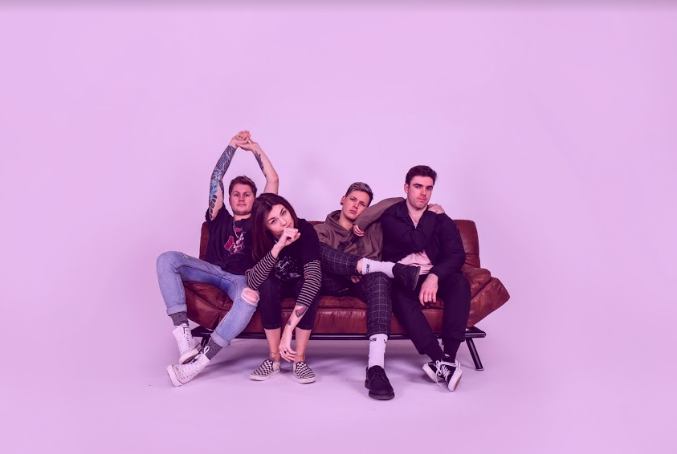 Jim: Mine wasn’t really a song, it was after I’d finished my GSCE’s and a bunch of us went to Leeds Fest. I knew after watching bands having a laugh with their mates, playing sick shows and crowds buzzing off their songs, that was a bit me.

Jim: I think we’re still in the crazy moment. Han and I have been sat on a bunch of songs for a year before we released Awful Ever After. Now it’s out is crazy how quick things are moving for us! So stoked though!

Han: oh god gonna sound like a lame piece of shit here aren’t I cheers
Ermmmmmm, the guess the whole of nightmares is pretty deep as it’s about feeling pretty disconnected from yourself and like not really finding any colour left in life. Uh oh.

Jim: Take Your Jacket was defo the easiest. It only took a really boring day at work, a bottle of wine and an acoustic guitar for us to write the song in less than an hour.

Jim: I’d love to do a collab with someone like Billie Eilish or No Rome. Something to break the confinements of genre stereotypes.

Han: Finding somewhere to poop that is not within 5 metres of everyone else.

Jim: Han can do a disturbingly good impression of a crying baby. It’s both terrifying and hilarious.

Han: I am the biggest joke in the band.

Jim: Not thinking too hard and putting yourself in a box. Have a focus, be it a subject or a feeling, explore every idea to its full potential and have fun!

Han: Oslo I think? And what a show it was! Sweaty one that.

Jim: I’ve seen Dermot Kennedy live a good few times and his show blows me away every time. The amount of passion that comes from his songs and voice, man. Chilling.

Han: Hot Milk…. orrrr Bearings we are all into at the moment. Jamming that record v hard.

Jim: The 1975 would be cool. I’ve always admired their live productions and performances.

Han: We can’t wait to get out to the US/Asia. But I think somewhere with sun right now would be nice, it makes for a better headspace for everyone when sky is blue.

Jim: Here for a good time, not for a long time.

Han: the EP is called “Are You Feeling Alive?” And it’s about not really feeling very present in life or like you are actually living. For me I felt like I was waiting for something to make me feel content for a long time, and that thing was this band. It essentially marks the process of Hot Milk becoming a thing through the songs and each track really helped me get to where we are right now.

Jim: Playing a bunch of fezzys this summer. Announced onto Live at Leeds, Stag & Dagger and The Great Escape so far but more to come for sure!

Han: What a weird question, music is soundwaves. Music is whatever you want it to be and it is so so personal and I don’t think you can say anything about anyone’s taste in music as everyone has something that hits them in a different way. Things ebb and flow with time as does music, I think it’s pretty shor tsighted to think anything from the past is better than it is now. What is better? More catchy? Better vocals? Faster tempo? What are the RULES? There are none.

Jim: We’ve currently only got tee’s and long sleeves, but a lot of my mates are having kids and asking for Hot Milk baby grows….

Variations you’d like to do on any of your records?

Han: Any and all. All up for any manipulation of anything we ever do.

Jim: Everything. Bands would be nothing without their fans.

Han: Yeah Deller has a sore wrist that he needs physio for, it’s from drumming too much honestly…. 😉

Jim: Hannah for sure. I find it’s easy to blame most things on Han, hehe.

Han:  Kangaroo coz we like to jump around but we have no qualms about punching you in the face if we need to.