Hello Bear are: Luke Bear- Vocals, Guitar Mary Bear- Guitars Tom Bear – Bass Daryl Bear – Drums A SONG WHICH MADE YOU WANT TO MAKE MUSIC: We’re all in agreement that the only song that made us all want to start music was the red hot, late 90s hit “5ive – Slam Dunk (Da […] 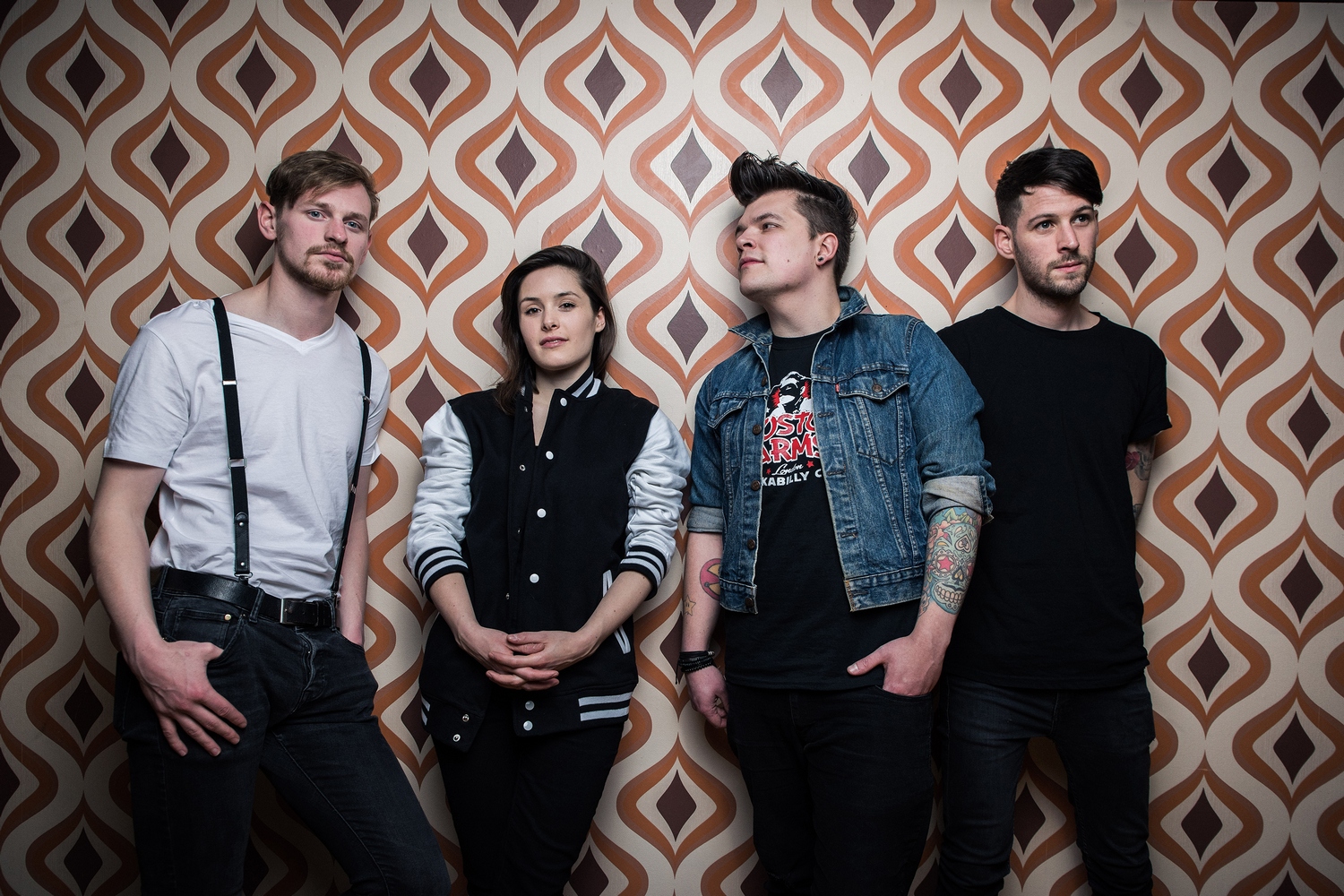 We’re all in agreement that the only song that made us all want to start music was the red hot, late 90s hit “5ive – Slam Dunk (Da Funk)”. The combination of counting, vintage break beats and a funky bass line is what we’re all about. The chorus is in fact our mantra: “Slam dunk da funk, put it up, if you got that feeling!”.

Her name was Clara-Lyn, she grew up on a farm and used to enter bucking-bronco competitions. Unfortunately she had to retire from the sport due to a hot dog and glue gun related incident. But when we were alone……OH, FOOD RIDER! Once we were given a stack (like about 10) of Dominos pizzas. We gorged. We felt ill on stage. Lesson learnt.

Many, but current top two: We drove all the way from Norwich to Liverpool to play a 45 mins set for Ben & Jerry’s Ice Cream Co. We got paid in tubs of Ice Cream, which melted on the way home. We played a festival, Tom got very drunk and we lost him. When he turned up in the morning, he’d woken up in a random part of a campsite, under a tarpaulin, in a yurt and he’d lost his trousers and underpants.

After this tale’s told I can only smoulder, coz I remember what it’s like to nestle up to her. My lap lined her legs in a warm embrace, when she was in my arms for my favourite memories: we write our lives on each other’s thighs.

Spenser Avenue. I believe we finished it in one studio rehearsal.

All our songs are fun to play. It’s very hard to pick just one. I suppose “An Exquisite Year For Charm” as it’s one of our oldest songs and we’ve played since day one of the band.

Travelling, Being away from friends and family, having no money, cancelling plans or not being able to attend stuff because we’re gigging.

Tom used to wear capes, for fun until his early 20s.

I’m not sure if we’ve found the key or some magic formula that makes us start writing. We all come up with songs in different ways, from individually writing to jamming out on a riff. I think the one thing that probably works is to not try too hard. The harder you try to make something happen the harder it is. Inspiration can happen when you least expect it.

Leeds is probably the furthest so far. But there’s word we could need a passports soon…

Really enjoying SWMRS at the moment.

Snozzberries? Who ever heard of a snozzberry?

Our new EP “I Don’t Know…It’s Fun Though, Isn’t it?”. With most of our song titles and album / E.P titles they’re taken from film / tv quotes. We had our last photoshoot in a bowling alley and wanted to use some of the shots of us messing around. Our manager Dan suggested the quote which is from the film Kingpin. Added to the fact that Bill Murray says it (who we all love) we thought it was perfect. Also, we know that some people find it kind of hard to fit us in a particular genre. All we know is that it’s fun alternative music. With this release being the first non DIY release it’s hopefully going to reach more ears, we thought it was a good introduction to Hello Bear.

I think we predominately listen to older music. Without the influence of old music there’d be no new. So, we vote old!

A mask of Mary’s face. Sock puppets made from our own used socks. Candy that makes you speak like a Mexican bandit.

We’d like 8 Bit remixes of all of our tracks. Or 40s swing versions of our songs.

It’s pretty cliché, but without them, there’d be no us. Sometimes we’re amazed when people come up to us and they tell us they’ve driven like over 2 hours to come and see us play a 30 min support slot! I mean, that’s dedication and it really makes doing this thing worth it. Best fan moment is when we played a show once and Luke forgot the lyrics to the first verse of one of our songs. The audience sang the verse at us. It was a great feeling!

Luke junked up his ankle assuming the fold-back rock stance once (and never again. He looked like a toddler wearing his dad’s clothes) and had to use his granddad’s walking stick. It was like one that his granddad had made from an old tree and it had load of spikes on it. If we got into trouble Luke could have used it as a weapon and seriously damaged some street-toughs.