Glasstide take on the A-Z challenge

Exeter rock/pop/punk quartet Glasstide blend the energy of punk, catchy pop melodies and raw edginess of hard rock to create a new breathe of life into what is currently described as a stale scene. The band release their debut EP Lights on September 23 and we caught up with them for this fun (and slightly crazy) A-Z challenge. 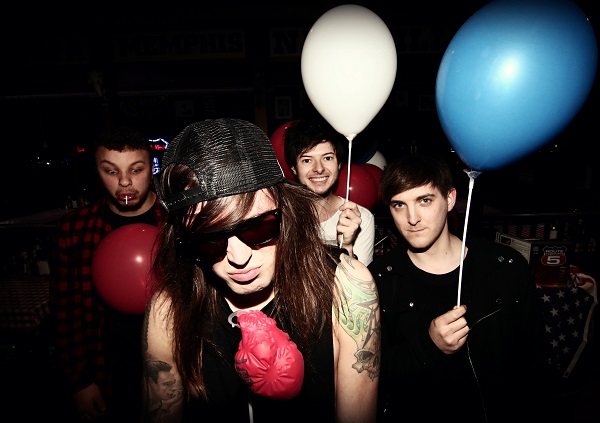 Exeter rock/pop/punk quartet Glasstide blend the energy of punk, catchy pop melodies and raw edginess of hard rock to create a new breathe of life into what is currently described as a stale scene. The band release their debut EP Lights on September 23 and we caught up with them for this fun (and slightly crazy) A-Z challenge.

I would say Wild Side by Motley Crüe. Its exciting – balls to the walls and all round rad!

I have had some good ones in the past with various acts, but I would say if they include beer and brown M&M’s in a whisky bottle, with a couple monkeys and some fireworks then I’m happy.

Oh where do I start…. I think mine would be when me and a very well known rock star that I’m not going to name where egging each other on to jump out of a window of a 3 story house on to a trampoline ….. And it happened.

“I’m bleeding out I’m running from this hurricane”

I would say Lights was one of the easiest songs we have wrote, but the production side wasn’t as easy.

Only For The Summer, it has that proper punk rock bite that really gets you moving.

Well the rest of the band probably predicted this answer. I would say Sebastian Bach considering he is a big influence of mine.

Tris Gaskell our guitarist has 8 nipples.

Beer, insults, beer, cigarettes, and stories about past relationships that went tits up.

That time when were booked to play Uranus that was quite a drive.

The Offspring because there shows are always utter chaos.

I would have to say the States because we all admire that culture.

Reason for the title of your upcoming EP release?

‘Lights’ was the first track we wrote for the record easy to remember one word simple and effective.

Any of Hugh Hefner’s party’s or at your local fish and chip shop.

Yes 100% today is a lot harder to succeed to certain platforms you want to reach. The industry has changed drastically, but yet again I wasn’t alive in the 70s and 80s but that is just research and what not.

Mine because I’m too busy packing a 100 t- shirts that I’m gonna wear all in one show or Cal because he is too busy having road rage.

Any kind of primate would sum us up.