Get to know Fizzy Blood

We caught up with Fizzy Blood before the Southampton leg of their tour with While She Sleeps and In Hearts Wake, to talk about influences, live shows, songwriting and new music. The best place to start would be what are your key influences as a band? We all came together because we all really liked […] 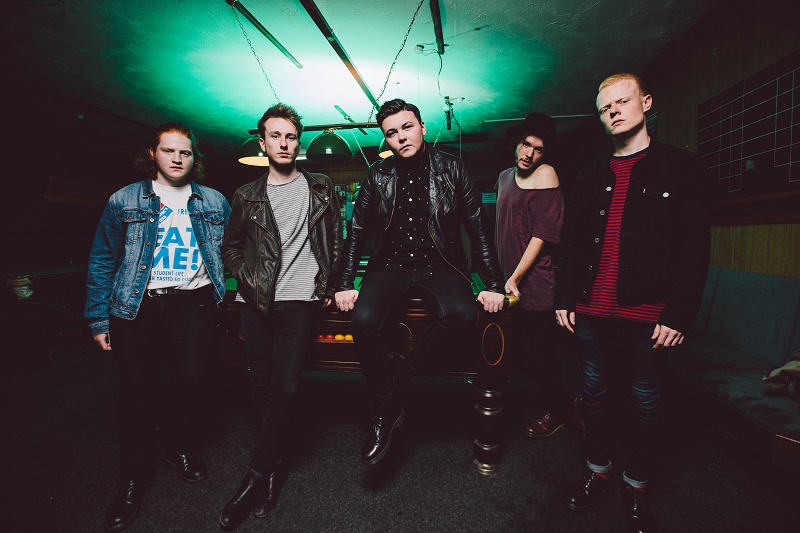 We caught up with Fizzy Blood before the Southampton leg of their tour with While She Sleeps and In Hearts Wake, to talk about influences, live shows, songwriting and new music.

The best place to start would be what are your key influences as a band?

We all came together because we all really liked Queens of the Stone Age. It has changed a lot as we’ve gone on, that was about 3 years ago, so your influences do change as you go. But that was a main starting point.

We do go through phases though, we are kind of moving away from that with the new stuff at the moment, but who knows every bands got to change.

You’re from Yorkshire, which has a vibrant rock scene, how has it been coming out of that scene, has it helped you, influenced you?

It has helped. Leeds is a really tight knit community, a really good place to be at the moment. So in ways that we don’t even realise it has helped us. We’ve been introduced to a lot of people, a shit load of good mates.

A lot of “bands in friends”, friends in bands even.

You’re on tour with While She Sleeps and In Hearts Wake who are a lot heavier than you guys are, has that been difficult and how do you approach opening for audiences used to heavier music?

The first couple of days were a bit weird. I think when we played York and Sheffield. They were a bit strange but still fun and then when we did the London shows and everyone hit their stride and they were amazing. Then we did Brighton which was even better. Things are starting to settle into their groove a bit now.

It has been a little bit of a challenge, generally towards the end of the set people are kind of digging it. You’ve got to work for it though.

At the Sheffield show there was this girl, who was obviously into metal, and all she did through the set was roll her eyes, right on the barrier as well. There was another girl with her fingers in her ears. (Come on guys, that’s not a nice thing to do, appreciate the music! – Ed)

You’re playing a lot of festivals this summer, some completely different crowds, again how do you approach these shows?

We just enjoy playing festivals. You can’t really guess who’s going to be there to see you, so you can’t prepare in that sense. You just pull out the party. Then try and tailor the set to the crowd that are going to enjoy it.

I think at festivals it brings your fans together, so it looks like way more people like you than actually do. They’re all drinking and stuff, so we really enjoy festivals.

Any festival this summer you are looking forward to most?

We’ve just announced Rock for People in Prague, which is going to be sick because the line-ups amazing. We are playing an absolutely massive stage, the biggest stage we’ve ever been on.

Any other European festivals?

We will do but nothing that’s announced yet

You’ve recently released ‘Pawn’, earlier this month, and coupled with your EP last year. How do you go about writing your songs lyrically, as some of the lyrics are quite unique?

It’s mainly stuff that I just want to get off my chest.

Black Sheep was written about stuff directly on my mind at the time. I was in uni and it’s a tough transitional phase, when you’re that age. It’s like a melting pot of bad mental health. So that was my way of analysing myself and trying to… I don’t know… I was being quite medicated at that point and I felt like everything was surreal, so I tried to bring that in with the nursery rhymes and things like that.

Other songs are just a bit more direct. Animals is kind of about, I used to work this horrible sales job and this woman was treating me like dirt, and I wasn’t allowed to respond because I was at work. So I wrote down everything I wanted to say on my phone in the notes app on the way home from work, and that was the lyrics to Animals.

Pawn was a bit different because we did that one together. That was kind of like this song needs to be about this. It’s quite a short song so didn’t really take very long. We wrote the first verse and then came to the second verse, and we said let’s just say the same thing again in different words. So that one was pretty easy.

I like Pawn it’s like a story, it kind of progresses, to me anyway. It’s using the example of this talent show mogul, picking up someone. It not being all it’s cracked up to be and I like how it progresses. That one is interesting because we were altogether at that point. Sometimes that can be really good and sometimes it can be absolutely terrible. Most of the time we write together it is absolutely diabolical.

What can we expect from new music in the future?

The next tune we are going to release is quite different. It’s definitely my favourite off the EP. So we are looking forward to getting that one out. I don’t know if you can compare it to our old stuff either. Our new record that’s going to be coming out in August, has way more of a seventies rock vibe. Feast is more dark and gothy, but this one does away with that a little bit and is a lot more upbeat, not in a cheesy way.

Pawn’s probably the heaviest one out of the new batch. It’s the same with Feast, as with this new record. Every song brings something really different, but it all fills that one record.

So you write your albums/EPs as pieces of work?

We do consider it like that. The new stuff we are writing at the moment especially. We are working on a new record at the moment, which is going to be out after the next one, and that’s completely different from the one that’s just about to come out. That’s because all of our favourite bands do that.